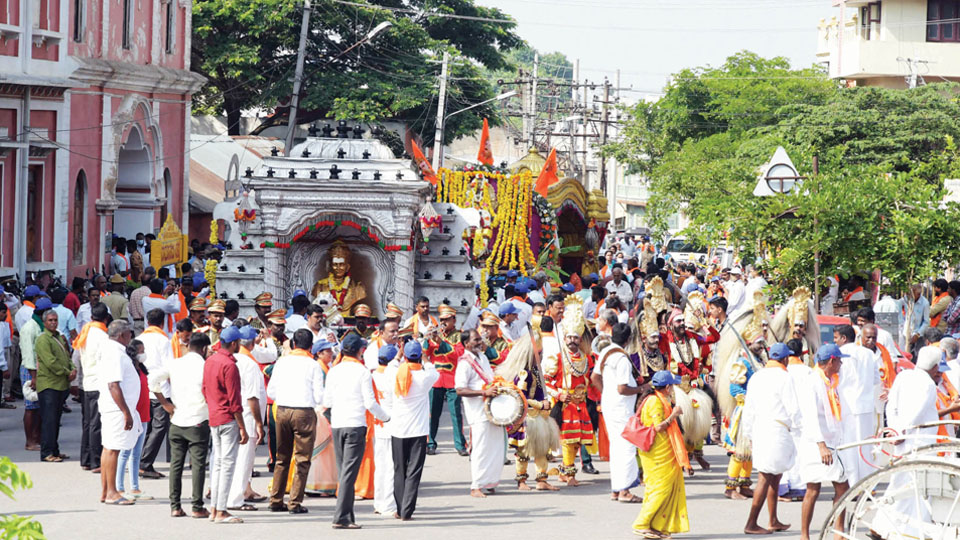 Mayor (in-Charge) Sunanda Palanetra flagged off the procession at Basaveshwara statue located close to Gun House Circle after garlanding the statue in the presence of various Seers, elected representatives and other dignitaries. The procession, which featured a number of small tableaux carrying busts and portraits of the great saint-philosopher, Nandi Dhwaja and a host of folk and cultural troupes, passed through Chamaraja Double Road, Ramaswamy Circle, JLB Road, Field Marshal K.M. Cariappa Circle and Vinoba Road, before culminating at Kalamandira on Hunsur Road, where the stage programme was organised.

Speaking as chief guest at the stage programme at Kalamandira, Chamarajanagar MP V. Sreenivasa Prasad said that 12th century social reformer Basavanna dedicated his entire life for building an all inclusive society  that gave equal opportunities for all sections.

Maintaining that Basavanna,  a Saint-Philosopher-Statesman revolted against Vydika Dharma to take up the cause of  transforming the society, the MP said that though Basavanna’s father had control of 16 villages and his maternal uncle was a Commander, the 12th century reformer shed all his glory and richness for bringing down caste and gender barriers through his poems which are popularly known as Vachanas.

He said that Basavanna set up Anubhava Mantapas in the 12th century that welcomed people from across the social strata for discussions concerning human life issues. Noting that Veerashaiva-Lingayat is the only dharma which included saints from minor and marginalised communities such as Ambigara Chowdaiah, Madara Channaiah, Devara Dasimayya and Madigara Haralaiah, the MP said that Basavanna used his vachanas to correct the shortcomings and nuances in society.

Recalling that Scholar Prof. M.M. Kalburgi had called  Basavanna as the Gautama Buddha of the South, he said that the concept of Anubhava Mantapa enlightened the society on various issues and social evils such as untouchability that was haunting mankind. Arguing that the current day Gram Panchayats too could have become such Anubhava Mantapas had they worked honestly with a societal purpose and conviction, the MP regretted that unfortunately, the GPs are not of such a kind and instead they are most often found to be ruining the society by working at cross purposes and for meeting selfish ends. A majority of GPs now are mired in corruption, nepotism and casteism, he bemoaned.

Pointing out that one of the tallest politicians of the State  late S. Nijalingappa gave an English version of Basavanna’s vachanas to Dr. B.R. Ambedkar, Prasad said that Dr. Ambedkar was surprised to know about the richness of teachings and messages in vachanas, which made a great impact on the way the Constituent Assembly was formed.

Prasad further said that Basavanna always believed in ‘Work is Worship’ principle (Kayakave Kailasa) and he followed it throughout his life, working for the cause of a discrimination-free society.

‘Kranti Yogi’, an album  brought out by Mandya District Backward Classes Welfare  Officer Somashekar S. Jigani was released on the occasion. Earlier, floral tributes were offered to the portrait of Basaveshwara.