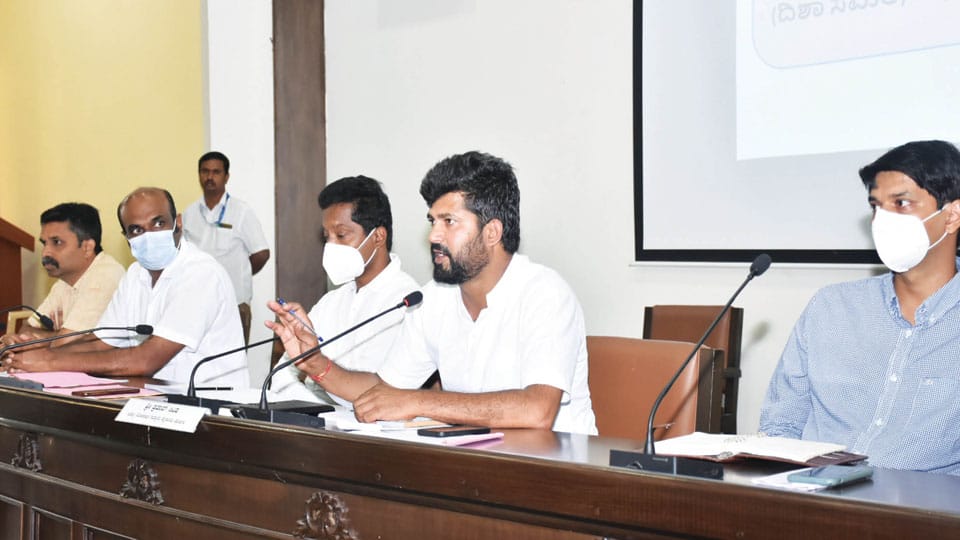 Mysore/Mysuru: Bamboo groves serve as the best microcosms of forest life and growing bamboo inside the reserve forests will prevent wild elephants from straying into human habitations in search of food, opined Mysuru-Kodagu MP Pratap Simha.

He was addressing a meeting of District Development Coordination and Monitoring Committee (DISHA) at Zilla Panchayat Hall in the city yesterday and asked the Forest Department staff to grow bamboo and other grass abundantly in the reserve forests and also Tiger Reserves in Bandipur and Nagarahole.

Besides adding to the green cover of the forest, bamboo stalks are a rich source of nutrition for wild animals. “You have to revive bamboo growth across the reserve forests and they must be grown across vast tracts. This will also prevent elephants from raiding the nearby villages foraging for food,” he said.

Earlier, green and native bamboo was abundantly available inside the forest and this had restricted the entry of elephants  to human habitats in search of fodder. Due to extensive forest fire and other factors, green bamboo growth has declined over the years, forcing elephant herds to enter paddy fields, the MP noted.

The receding cover of bamboo, besides reducing food stock for the wild animals, had an unintended consequence — human-elephant conflict — Pratap Simha said. He also asked the department staff to complete the barricading of the reserve forest boundaries with iron railway tracks.

The elephant population in Karnataka has grown of late and Bandipur and Nagarahole tiger reserves have over 1,200 to 1,300 elephants, said Forest Department officers. Of the 857 km targeted areas, only 57 km have been fenced with railway barricades and a fund of Rs. 500 crore is required for the same, the MP was told.

Pratap Simha also directed the officers to encourage farmers to grow green areas and also distribute saplings and provide incentives for those farmers who have taken up extensive tree plantation drives.

Directing the Deputy Director of Public Instruction Ramachandraraje Urs to ensure the safety of children in a post-pandemic scenario, the MP asked him to work towards achieving good results in SSLC exams.

He asked authorities to speed up works of making proposals regarding development of Ring Road and underbridges at designated spots along the Ring Road.