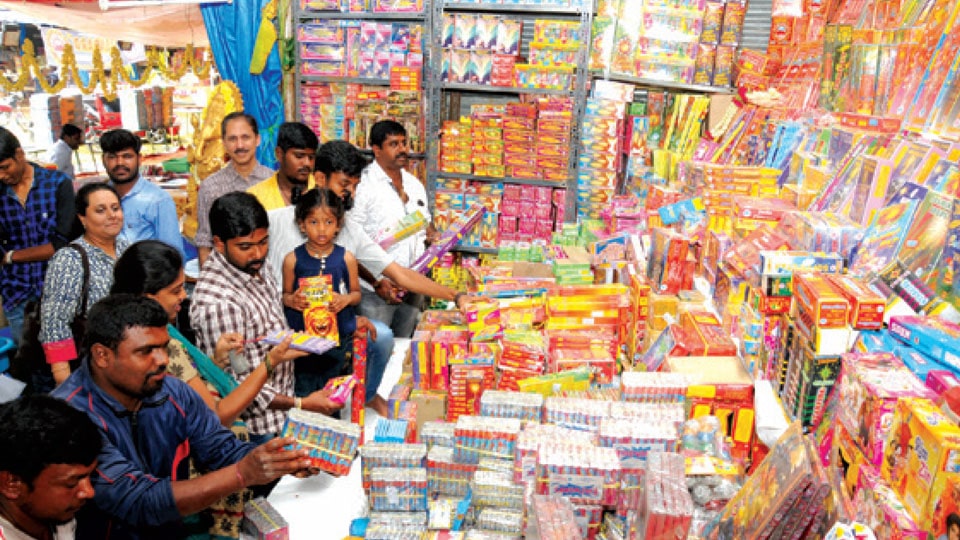 Mysuru: The Supreme Court has banned the sale of fire crackers in the nation’s capital Delhi and the surrounding National Capital Region. But, in a comparatively pollution-free atmosphere like Mysuru, the alarm bell has not started ringing yet, as people continue to buy firecrackers. However, due to ‘One nation, one tax’ and heavy rains in the past two months, the sellers of firecrackers are an anxious lot.

Most of the time, Deepavali comes in the month of November. This time it has come in the month of October itself. Added to this is the record rain that the city is experiencing and adding insult to injury is the hike in prices by 10 to 12 percent in the form of Goods and Services Tax (GST).

The production in the cradle of firecracker manufacturing in the country — Sivakasi has gone down, it is said and if the demand goes up then the cost would escalate.

The good news is that the import of crackers from China has been banned. This also could result in the prices rising and the customers decreasing. The businessmen who have invested lakhs of rupees on the firecrackers are worried about the losses.

The buyers of crackers should be ready to pay extra 28 percent GST to purchase the varieties of their choice. The owners who put up temporary stalls, have to pay Rs.10,000 per day and Rs.50,000 for five days. “With all these uncertainties, we are just not sure how the business will work out,” a few of them told Star of Mysore.

Places to sell firecrackers: Last year, the sale of firecrackers was very good in Mysuru city and surrounding areas. However, this time with the strict imposition of conditions by the authorities, permission has been given to open the stalls in only a few select places.

J.K. Grounds where huge stalls are being set up, Doddakere Maidan on Bengaluru-Nilgiris Road, Ballal Circle (Ashoka Circle), near Akshaya Bhandar in Kuvempunagar, Ramakrishna Circle, Bogadi, J.P. Nagar, Chamundipuram and Hinkal are some of the places where firecrackers will be sold. 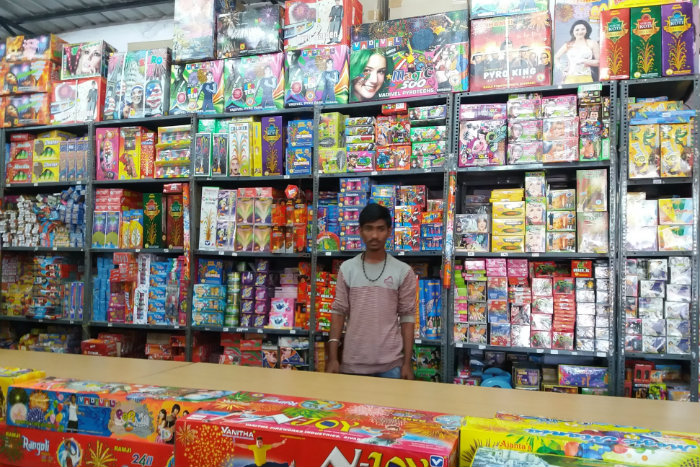 In all, there are 64 places, where the Mysuru City Corporation (MCC), Fire and Emergency Services, Chamundi Electric Supply Corporation (CESC) and the Police Commissioner have given permission to set up stalls.

Added to this, there are permanent stalls in Hebbal Industrial Area, where firecrackers are available throughout the year.

READ ALSO  DeMo, GST, etc: How to create a mess, then make it messier; Now, link your Aadhaar number to your sambar-vada

A few conditions have been imposed under the guidance of Police Commissioner to open stalls to sell firecrackers.

The stall should be a minimum size of 10 ft x 15 ft covered with zinc sheet, should be free from any kind of electric wiring or connection. There should be a gap of at least eight metres between the stalls, every shop must have 400 litres of water kept outside and also fire fighting equipment. There should be buckets filled with sand, No Smoking boards and emergency telephone numbers must be displayed. No one can sleep in the stalls at night and food should not be cooked in the place. Stalls cannot be opened near schools, colleges and hospitals. Firecrackers cannot be sold in places where there is concentration and movement of people, are some of the conditions imposed, said Fire and Emergency Services Officer Gururaj.

To create awareness about the harmful effects of bursting firecrackers, Sneha Balaga, Spandana Trust and  Shri Kshethra Dharmasthala Rural Development Project (SKDRDP) is jointly organising the sale of ‘1000 Akasha Buttis’ from Oct. 18 to 20 between 6 pm and 8 pm at the following places: Pramathi Hillview Academy on Oct. 18, Nataraj College near Shankar Mutt Road on Oct. 19 and Siddartha Hostel Ground in Ashokapuram on Oct. 20.

Earlier, a stage programme was held at Maharaja’s Junior College during which Dr. Rameshwarappa and Prakash gave lectures on the ill-effects of pollution on animals, humans and the environment. They also issued guidelines on bursting crackers besides giving a demo on safety  precautions to be taken while bursting crackers.