Home » News » Guinness Yoga: The other side 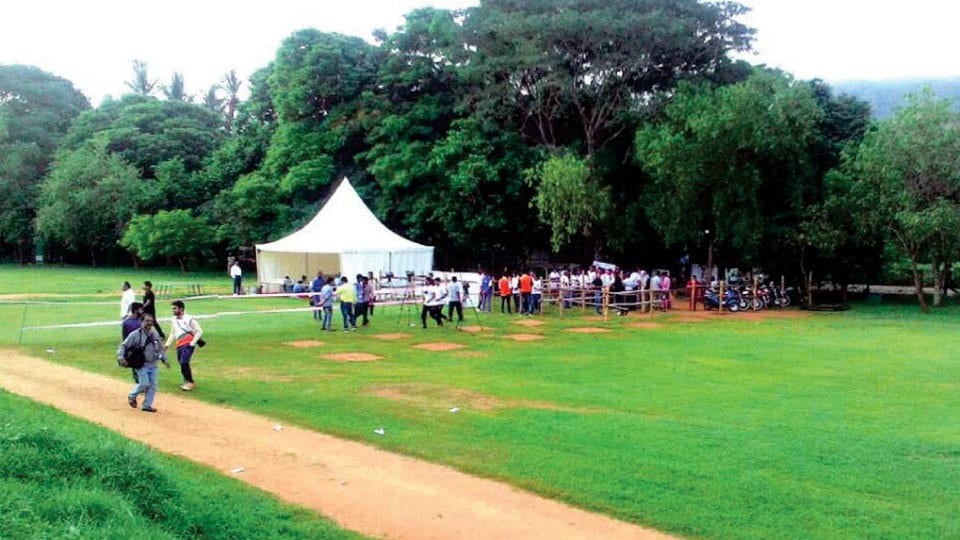 Guinness Yoga: The other side

Mysuru: It was a big day for Mysuru that was attempting to break the Guinness World Record for mass yoga performance at a single venue. Mysureans got up early and headed towards the Mysore Race Club, the venue of the feat, as early as 4.30 am.

While more than 50,000 enthusiasts performed yoga peacefully inside the green Race Course, areas outside the venue witnessed massive traffic jams and indiscriminate throwing of plastic bottles at the breakfast counters set up near the entry gates.

Yoga enthusiasts were seen landing at the venue as early as 5 am from all corners of the city. They either came in their own vehicles or took over 80 KSRTC buses that ferried them from across the city. Most of the schools and colleges had arranged their own buses to take students to the venue. Participants were also seen pooling in cars to take other people to the Race Course.

Anticipating the rush, the city Police had banned the entry of private vehicles on roads around the Race Course including M.G. Road, Race Course Road, Harishchandra Road, Chamundi Hill Road from the Race Course stretch, CAR Grounds Road and Maharana Pratap Road. Though traffic jams were not witnessed early in the morning, roads surrounding the barricaded stretches witnessed bumper-to-bumper traffic after the performance ended.

Though the Police had marked several designated parking areas, confusion prevailed as the crowd started piling up at about 6.30 am. As soon as the event ended at around 10 am, several roads including JSS College Road that leads to Nanjangud, Yelethota Road, St. Mary’s Circle, the surrounding roads of M.G. Road, Agrahara and roads leading to Agrahara were clogged. Traffic Police and the Home Guards manning the traffic had a tough time in controlling vehicles.

PLASTIC BOTTLES STREWN ALL OVER

The District Administration and other voluntary organisations had arranged breakfast for all the participants. Packets containing upma were distributed to yoga performers along with water bottles. Special food counters were opened at all the seven gates to the venue and food was served as the participants came out of the venue.

Long queues were witnessed in front of the food counters and volunteers had a harrowing time to ensure order. After eating the food, participants, however, threw the leftovers and water bottles at the venue instead of dumping them at designated waste bins. Heaps of waste was seen around the food counters and workers from the Mysuru City Corporation (MCC) cleaned the mess later.

MAKING HAY WHEN THE SUN SHINES

Taking advantage of over 50,000 people at one venue, many advertisement companies had sent their representatives along with thousands of brochures to be distributed. These printed brochures, however, were strewn all over adding to the mess.