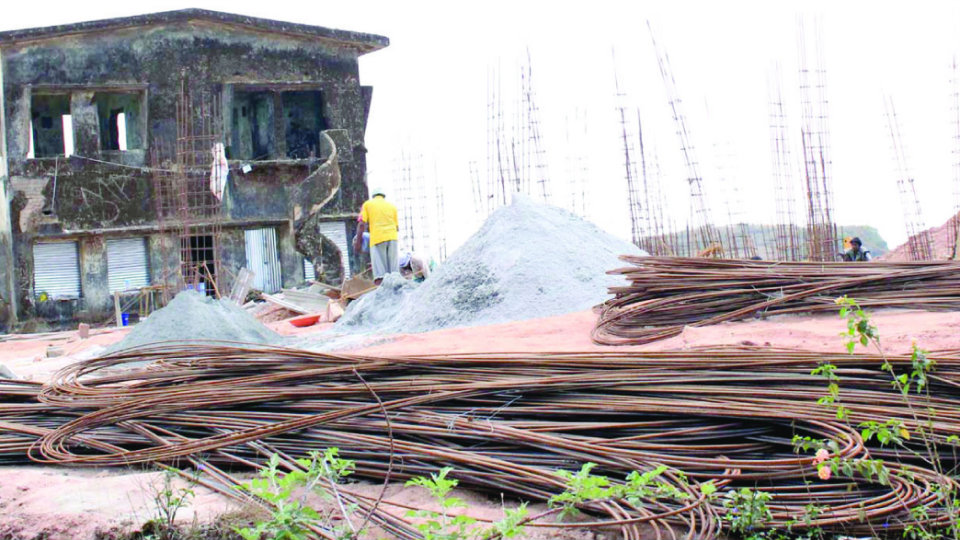 Madikeri: The proposed construction of a Guest House by South- Western Railway at Stuart Hill in Madikeri has received stiff opposition from all quarters. While environmentalists have questioned the necessity of such an office when the people are up in arms against Railway projects in ecologically sensitive Kodagu, Former Minister M.C. Nanaiah has written to Kodagu Deputy Commissioner demanding immediate stalling of construction.

The works on constructing the building that belongs to National Railway Development Project is being carried out at a brisk pace at Stuart Hill and one acre of land has been acquired for the purpose. The place has been excavated and pillars are being constructed. Nanaiah has demanded the District Administration to take the possession and conserve of the land.

In a letter to Kodagu Deputy Commissioner P.I. Sreevidya, Nanaiah has said that, “The Stuart Hill is a beautiful place. People get to experience nature’s beauty of Madikeri from Stuart Hill. If a guest house is constructed, then it will spoil the beauty of the place.”

Further, Nanaiah has said that in spite of it being a  protected area, the work on the Guest House has been taken up on Stuart Hill, which is illegal.

Nanaiah has alleged that without obtaining permission from the City Municipal Council, Madikeri Urban Development Authority, the work on the Guest House has been started by placing a name board of South Western Railway office. It was during the British rule, Commissioner Stuart had conducted a survey on the Hill, and named it as Stuart Hill, Nanaiah said.

At a time when the discussions on two Railway lines passing through Kodagu are on, the Railway officials have taken up the work without giving any clue.

“In 2012 and 2013, I had written a letter to the then Deputy Commissioner and had stalled the works of the Railway Board. Now they have started the works clandestinely by erecting a signboard in the area,” the former Minister said.

“Ten to 15 years back, the same location (Survey Number 460/1P) had housed a micro tower and a control room that would monitor the Railway running time table of trains plying in Southern areas of the country. Over 3.8 acre area had been used by the control room. When the Railways modernised its infrastructure and coaches, the control room was rendered defunct and it was shifted from Madikeri. Later, the 3.8acre land that was handed over to the Railways by the State Government was reclaimed by the State,” the letter said.

“The construction works clearly violates the City Development Plan (CDP) of Madikeri which allocates the land as Green Area. The District Administration must immediately stall the construction and take possession of the land before the green area becomes a place for Railway Officers to enjoy at the cost of environment,” he stated.

He has urged the DC to inspect the spot. “The work on the Guest House should be stopped before the public raise their voice. Owing to stiff opposition, the tower was shifted years ago. Now, the same place is being used for construction of a Guest House,” Nanaiah explained.