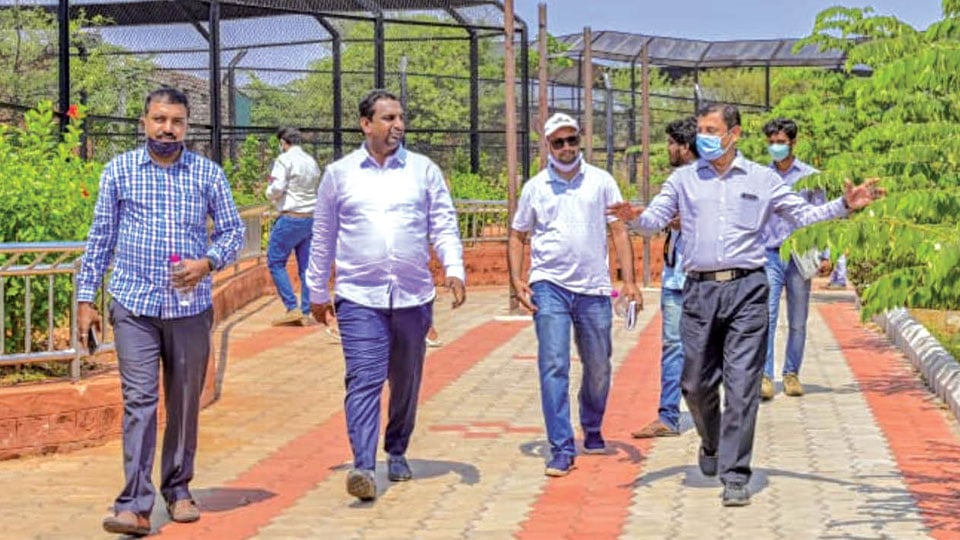 Mysore/Mysuru: Zoo Authority of Karnataka (ZAK) Chairman L.R. Mahadevaswamy visited Atal Bihari Vajpayee Zoological Park near Kamalapura in Hospet taluk of Vijayanagar district yesterday.  He went around the Zoo which is spread on 350 acres of land near Hampi and also inspected ongoing works.

Speaking to reporters, Mahadevaswamy said that Hampi Zoo was competing with the century-old Mysuru Zoo in all aspects. The Authority was giving importance to all nine zoo’s across the State.

Despite severe heat condition, the Hampi Zoo officials have planted 9,000 trees which is going to give a total green cover to the entire place. A pipeline is laid in downstream of Tungabhadra Dam to ensure water for the Biological Park. Once this work is done, it will provide ample water to fill up all natural water holes in the Zoo as well as recharge underground water.

He said Chief Minister B.S. Yediyurappa had announced Rs. 30 crore budget for the improvement of Zoos and Forest Minister Arvind Limbavali has released the amount recently. Revenue to all Zoos has been hit badly due to COVID-19 pandemic and the citizens can help  Zoos through the adoption of animals and birds of their choice. This will help the Zoos to a great extent,  he noted.

Mahadevaswamy said the animals were fed with chicken instead of beef in all zoos and there has been no change in animal behaviour. They were slowly getting adjusted to the new food. In fact, MLA  Anand Singh was taking lot of interest in development of this Zoo which was going to be another important tourist centre along with the Hampi monuments.

RFO Manjunath and DRFO Ramesh and others were present during the ZAK Chairman’s visit.