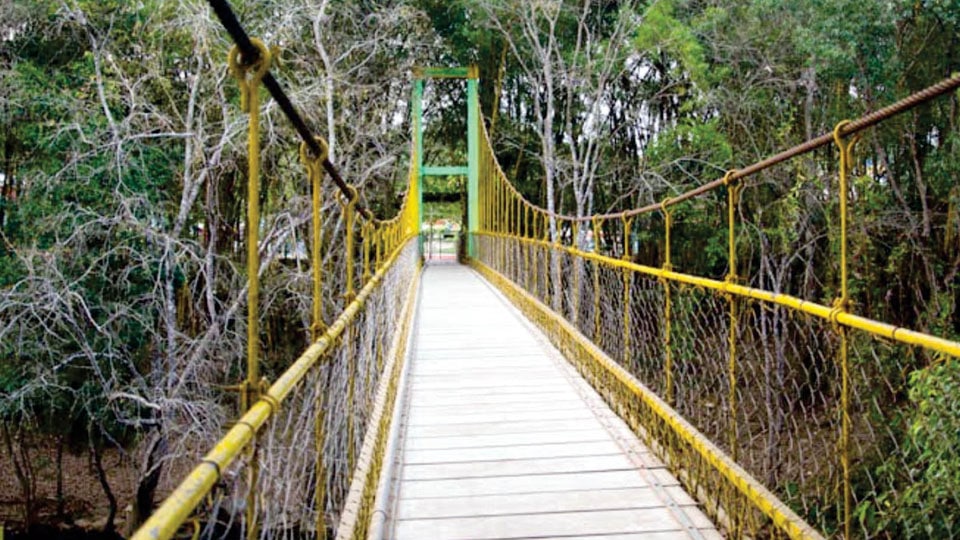 Second hanging bridge to come up at Kaveri Nisargadhama

Kushalnagar: The Kodagu Forest Department has sent a proposal to the District Administration to build another hanging bridge across River Cauvery at Kaveri Nisargadhama near Kushalnagar. The existing 90-metre hanging bridge has been declared unsafe.

The proposal has been submitted and is in the estimation stage and the district authorities have asked the Forest Department, instead of a hanging bridge why can’t a concrete bridge — a permanent one — be built. Department sources told Star of Mysore that a concrete bridge is not feasible as the Nisargadhama is a water-intensive area and some of the islands get submerged during monsoon due to heavy rains.

Also, constructing a concrete bridge will be an expensive proposition and even in a conservative estimate, it would cost more than Rs. 20 crore. So the district administration has settled for a second hanging bridge that is low cost and easy to maintain for at least 10 years.

Nisargadhama has been formed on a natural island where River Cauvery flows. The area is located at Bollur village under Guddehosur Gram Panchayat. As it is an island, the Forest Department connected it with a hanging bridge. Earlier there was a wooden plank bridge supported by pillars. After the wood started wearing out, the Department constructed a hanging bridge next to the old one in 1995.

This hanging bridge was built by Padmashree Girish Bharadwaj, who is an industrious social entrepreneur, popularly known as ‘Bridge Man’. He has built more than 100 hanging bridges or “Suspension Foot Bridges” across India. In 1975, he established his own “Rational Engineering Industries” at Sullia in Dakshina Kannada which is now called Ayasshilpa. His son Pathanjali Bharadwaj runs the show now.

Two years back, Pathanjali Bharadwaj had visited Kaveri Nisargadhama and had told the Forest Department that the hanging bridge was wearing out and unsafe for human movement. He even wrote a letter to the Department about the precarious situation that might lead to “sudden failure.” He stressed on the need to construct another hanging bridge keeping tourist safety in mind.

The iron wires that hold the bridge have been covered in bamboo and due to heavy rains, water seeps from the bamboo to the wires rusting and weakening it. Following Bharadwaj’s letter, the Nisargadhama officials limited the number of people who can cross the bridge since the last two years. If the tourist flow is heavy, only 10 people are allowed to cross over at a time with forest guards keeping a watch.

If the proposal of a new suspension bridge is accepted, the old hanging bridge will be decommissioned and tourists will be allowed to tread on the new one.