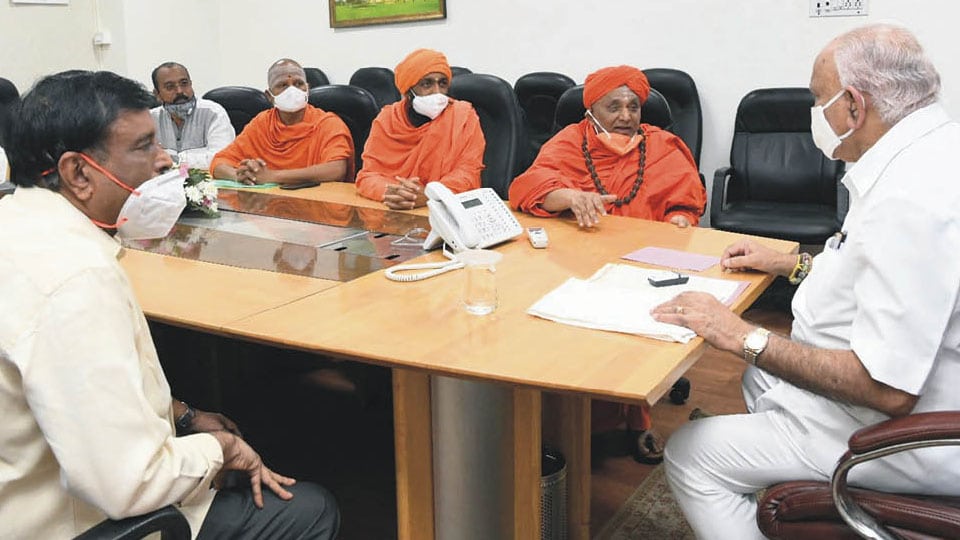 Bengaluru: The buzz around Chief Minister B.S. Yediyurappa’s possible declaration on OBC status for Veerashaiva-Lingayat community and  also the formation of Vokkaliga Development Corporation, that was reportedly slated for this morning, proved to be a dampener, as Yediyurappa  just ahead of today’s meeting of the Council of Ministers, announced that he would travel to Delhi shortly before finalising the proposal for including Veerashaiva-Lingayats, the community to which he belongs, in the  Centre’s OBC (Other Backward Classes) list.

Yediyurappa, only last evening after returning to the State capital from a three-day tour of Mysuru and Chamarajanagar districts, had announced that  a meeting of his Council of Ministers would take place at Vidhana Soudha on Friday morning, in a move that surprised even his close associates. Ahead of the announcement of the Cabinet meeting, Yediyurappa on Thursday evening, is said to have closeted with a couple of Lingayat Ministers, apparently to discuss  the issue concerning OBC tag and reservation for the community.

However, this morning, some of the Ministers, who reportedly  met the CM, advised him against making any announcement in a hurry on the issue of OBC tag and appealed Yediyurappa to hold back the announcement for now. Following this development, Yediyurappa decided not to make any announcements and merely told waiting presspersons that he would be travelling to Delhi.

Briefing presspersons after the Cabinet meeting, Law Minister J.C. Madhuswamy said that the Cabinet gave nod for the creation of Vijayanagar District with Hospet as its headquarters after carving it from Ballari district.

Pointing out that Vijayanagar District will be the 31st of the State, the Minister said that the new district will have 6 taluks—Hospet, Kudligi, Kottur, Harapanahalli, Hoovinahadagali and Hagaribommanahalli.

Meanwhile, it is learnt that nearly half of the Cabinet Ministers were absent for the meeting, as it was called in a hurry.