Home » News » Hassanamba Temple opens, but not for public 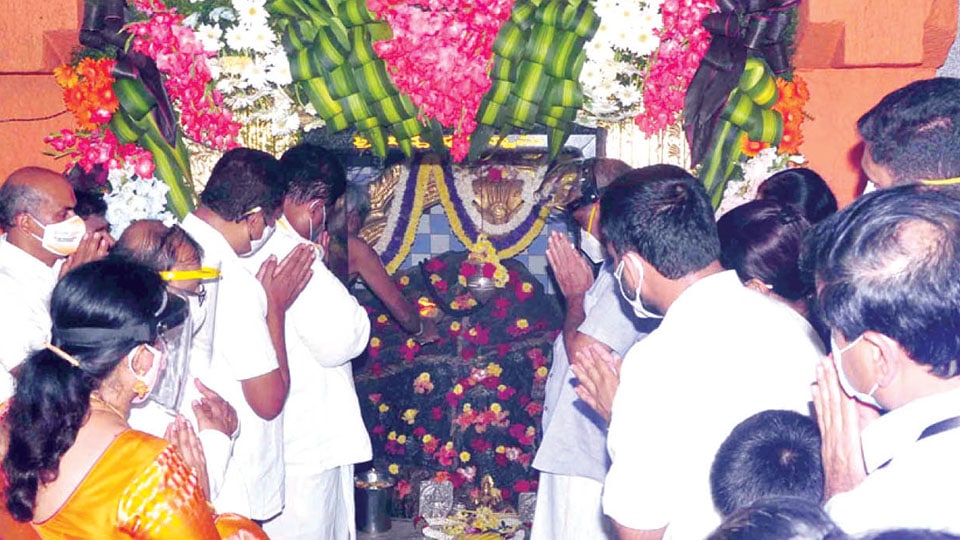 Hassanamba Temple opens, but not for public

Hassan: Amid the COVID-19 crisis, the doors of the famed Hassanamba Temple at Hassan were opened on Thursday for the annual festival.

The Temple was opened after Narasimharaja of Urs community chopped a banana stem in the auspicious time of 12.17 pm yesterday. Soon after the  stem  was felled, hundreds of devotees, who had gathered in front of the temple despite restrictions as a COVID-19 safety measure, rushed to collect a piece of it as it is believed to bring prosperity. Many devotees also tried to enter the temple to have a darshan of the deity ­— Goddess Hassanamba —, but were stopped by the Police who were deployed in large numbers as a  security measure.

Due to COVID-19 regulations, devotees are barred from entering the temple. However, the district administration has installed LED screens at 10 spots in Hassan city to enable devotees to have a virtual darshan of the deity. Arrangements are also made for online darshan and sevas.

Hassan District In-charge Minister K. Gopalaiah, Law Minister J.C. Madhuswamy, MLAs and other dignitaries had the darshan of the deity on the opening day yesterday. The temple would be open till 2 pm on Nov.16 and only select dignitaries will be allowed to the temple on the last day (Nov.16) also, according to temple authorities.The  Hassanamba Temple  festival and Siddeshwara Jatra Mahotsava will also be telecast live on Facebook page- www.facebook.com/the beauty of hassan/videos/343977/4479582036.