Home » Feature Articles » He builds an Agrahara, makes his house a temple 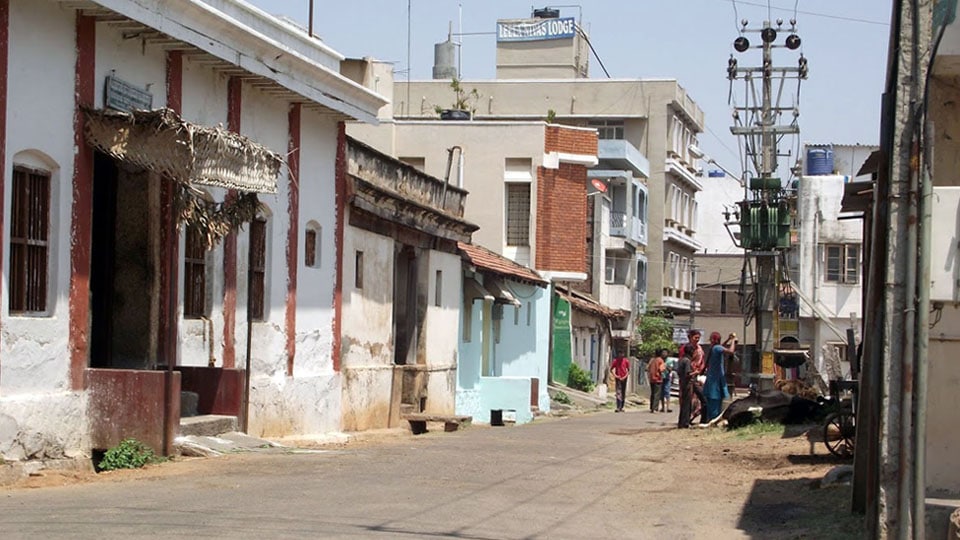 He builds an Agrahara, makes his house a temple

At the time of shifting of the headquarters to Mysuru from Srirangapatna, the erstwhile capital was in a devastating condition. The Fort and the Palace had been demolished. The situation was so bad that there was no proper structure where the installation of Maharaja Krishnaraja Wadiyar III could be conducted. As a result, the city had to be rebuilt, including a suitable residential place for the newly-installed King and his family.

The rebuilding of the capital city began after the restoration of the kingdom to the Mysuru royal family. From then on, Mysuru began to expand, adding new areas.

Initially, it began with the construction of houses within the Fort and later outside its four walls. New Keris and Agraharas began to appear. Besides Krishnaraja Wadiyar III, even his queens took interest in constructing Agraharas of 21 houses and donated them to deserving persons of the Brahmin community. These Keris and Agraharas came up in the then existing Fort Mohalla, Devaraja Mohalla, Krishnaraja Mohalla, Lashkar Mohalla and Mandi Mohalla, resulting in their expansion.

As the city began to witness a rise in population and the need for more houses began, the development moved from the construction of one-street Agraharas to Purams and Extensions like Lakshmipuram, Saraswathipuram, Chamarajapuram, Vani Vilasa Puram, Jayalakshmipuram, Chamundipuram (which includes Hosakeri and Chamundi Extension), Vidyaranyapuram, and Nagaras of a larger scale like Vishweshwara Nagara, Kuvempunagara, Vijayanagara and J.P. Nagara. New layouts with new names began to be developed on all four sides of the city, private developers also entering the field as the city progressed.

An interesting feature in this expansion is the contribution made by a few prominent personalities who evinced interest in constructing new Agraharas, apart from the rulers and their queens. Perhaps, Subbarayadasa surnamed Gopaladasa was the first such person to construct an Agrahara. According to records, this saintly person formed an Agrahara in 1836 and gifted it to Brahmin priests.

Formed in his name, the Agrahara was named ‘Subbarayadasara Agrahara’ and it was opposite the Prasanna Venkataramanaswamy Temple. Subbarayadasa made this Agrahara for ‘increasing the merit of the king, Krishnaraja Wadiyar III, and for the accruement of merit of his forefathers, of himself and his elder brother, Sinappadasa.’

The Agrahara had nine houses built for accommodating the priests of the temple. It included a feeding house (Anna Chatra) at its beginning. The land for the construction of the Agrahara was given by the Maharaja, who also had granted Vrittis of six varahas a person to three priests, Venkappachar, Venkatarama Sastri and Krishnadasa, who conducted daily worship in the temple and other residents, for their livelihood.

Opposite the eastern entrance to the temple stood a shaded structure to station the wooden chariot used for taking out the idol of the deity in procession through the streets. There was also a pond with an Anjaneya Temple and it was named ‘Srinivasa Pushkarani’ and a garden as well. The grove provided flowers and other requirements for the daily worship of the deities in the main temple and in its small shrines.

It may be noted that the Subbarayadasara Agrahara came up 15 years after the construction of the Krishnavilasa Agrahara with 20 houses which was built in 1821, along with the Lakshmivilasa Agrahara, which was opposite to it and Ramavilasa Agrahara. It was later the Jaganmohan Palace (1861), Maharani’s School (1889), the Dewan’s Bungalow of Sir Seshadri Iyer, which houses the Commercial Tax offices now, and other structures came up.

The temple has two entrances, one facing the east and the other to the South, facing the historic Maharani’s School. This was probably the first Agrahara to be constructed by a private person in Mysuru.

The highly revered Madhwa saint, a protector in all respects (sarvavishayadallu samrakshaka), was an officer in the Palace. He lived in the house, which was later converted into the temple of Prasanna Venkataramana, enjoying the ‘bhatamanya’ and ‘vritti’ at Anandur previously granted by the mother of Krishnaraja Wadiyar III, dowager queen Lakshmammanni.

Popularly known as ‘Mysore Subbarayadasa’, he was held in high reverence for his religious practices and pious acts. A devotee of Prasanna Venkatesha, Subbarayadasa is believed to have performed many pious deeds and miracles during the time of Maharaja Krishnaraja Wadiyar III. In recognition of his pious deeds, the Maharaja conferred on him several gifts and honours, including the piece of land for the construction of the Agrahara. The Maharaja had also made a payment of 3,680 ‘Kanthiraya Hana’ in 1843 for the feeding house Subbarayadasa was running at Bilikere.

When plague epidemic broke out in Mysuru and many people died, Lord Venkatesha is said to have appeared before Subbarayadasa like a boy in his dream and told him that the disease would disappear and the desires would be fulfilled if he distributed three ‘Angaras’, one ‘Kanthiraya Hana’, the then currency, and ‘Mantrakshate’ (sanctified rice grains) to the people in the town from the next day. Acting according to the direction he had received in his dream, Subbarayadasa distributed angara (sacred ash applied on forehead) and tirtha (sacred water) for nine days without food or sleep.

When subsequently Subbarayadasa decided to go on a pilgrimage, the Maharaja invited him to the Palace and honoured him with valuable presents. He also made gifts to the deity Venkataramanaswamy. Subbarayadasa undertook the pilgrimage in the palanquin Mummadi Krishnaraja Wadiyar had given to him besides money.

After returning from his pilgrimage, he presented the sacred water of the Ganges he had brought with him to the Maharaja. Pleased with this, the Maharaja got the temple constructed for Lord Prasanna Venkataramanaswamy in the house of Subbarayadasa in Krishnavilasa Agrahara with a tower, a pond (Srinivasa Pushkarani), a Mantapa, a garden, etc. He also got a chariot made for the temple for the procession and gave a grant of Rs. 100 a month for the festivals to be conducted.

After his house became a temple dedicated to Lord Venkatesha in 1825, Subbarayadasa built the Agrahara to provide houses for the priests in 1836.

Inside the temple, there is a three feet high ‘Bhakta Vigraha’ of Subbarayadasa with an inscription by its sides giving his name and other details. The Madhwa saint is shown as though giving away everything that he has. He carries musical instrument Thamburi and in his left hand a water vessel from the sprout of which falls a libation of water in the act of giving everything he can to the God he held close to his heart. A statue of his brother, Sinappadasa is also seen in the temple. The ‘Brindavana’ of Subbarayadasa is located within the premises.

On the slab above the doorway of the Anjaneya shrine, the inscription dated 1836 gives elaborate details of the piety, charities made to the God, and long journeys undertaken by Subbarayadasa all over India. Two stones fixed to the wall on either side of the entrance to the garbhagriha, narrate about Subbarayadasa and the grant of 3680 varahas the Maharaja had ordered to be paid from the Palace Treasury by Lingarajaiya Arasu to the feeding house run by Subbarayadasa at Bilikere. Pleased over the manner in which the temple and other facilities had come up, Maharaja Krishnaraja Wadiyar III had the inscriptions installed.

A significant feature of the temple is the Mantapa above the Anjaneya shrine. This unique ‘Chitra Mantapa’ is fully decorated with Mysuru-style paintings of Mummadi Krishnaraja Wadiyar’s era. The interior four walls of the painted hall are fully covered with frescos of 12 Maharajas of Mysuru mentioning their names and period of their reign, maps of Mysuru and Srirangapatna and sketches of pilgrim places.

There is also a wooden panel showing sage Vyasa seated on the coils under the canopy of a five-hooded serpent, attended by Madhwacharya, Garuda, Bhima and Anjaneya. In the lower portion are the standing figures of Dewan Purnaiah, Krishnaraja Wadiyar III, Subbarayadasa and Sinappadasa.

The temple and the Agrahara stand as a mark of testimony to the benevolent act by two notable personalities of the period — a king and savant. While Maharaja Krishnaraja Wadiyar III patronised Subbarayadasa, the Madhwa saint made his home a temple and built an Agrahara and offered everything to his patron deity deciding not to have anything for himself.

Standing in memory of this devoted person, the temple adds to the significance of Krishnavilasa Road, which also has the historic Parakala Mutt at the commencement of the Agrahara.

Agrahara Gouri Satya Maharaja Krishnaraja Wadiyar III Mysuru: A Look at its Past Subbarayadasa
A dangerous barrier on Bogadi-Gaddige Road
Malayalam novel about a Russian novelist

8 COMMENTS ON THIS POST To “He builds an Agrahara, makes his house a temple”