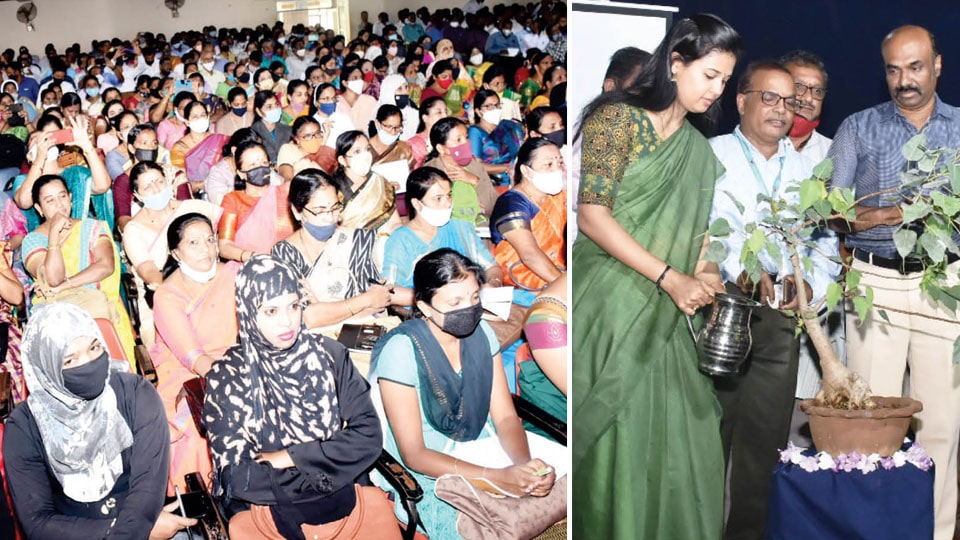 Mysore/Mysuru: A day-long seminar on improving SSLC results in the district was held under the joint aegis of Zilla Panchayat and the Department of Public Instruction at Sarada Vilas Centenary Hall in Krishnamurthypuram here yesterday.

Speaking after inaugurating the Seminar, Deputy Commissioner (DC) Rohini Sindhuri said that the physical classes for tenth standard has begun after a long gap of eight months from the previous academic year and the students have just got adjusted to attending schools after such a long gap. Noting that the SSLC exam that is scheduled to commence from June 21 is just three and half-months away, she said that the school heads and teachers must not waste any time in preparing the students for the exam and also on educating them on the exam method.

Stating that during her recent visit to a school, a seventh standard student was finding it difficult even to read lessons, Sindhuri said that teachers have got a responsibility in preparing very slow and slow learners for the all important SSLC exam in such a short period of time.

Pointing out that this academic year can be called as a  wash-out year, as schools remained closed for a long time due to the outbreak of the deadly COVID-19 pandemic, the DC said that there is no doubt that the pandemic has hit education hard, just like any other field.

Expressing disappointment that the district, which is known for many firsts, is lagging behind in SSLC results, Sindhuri said that all stakeholders should strive hard to ensure that the district comes at least in the top 10 ranking in the State, if not the top position.

Maintaining that 185 schools in the district recorded less than 60 percent results last year, she said that teachers should try their best to cover 100 percent syllabus within the short time that is currently available.

Advising the teachers to focus more on important chapters, the DC called for taking students to other schools on a study tour, just like being done at the University level.

Observing that the district has fared badly in English, Maths and Science subjects as can be seen in the performance of previous years, Sindhuri, citing an example when she was Hassan DC earlier, asked the teachers to engage the mothers of students to ensure that students concentrate only on studies at this critical juncture and give their best in the coming SSLC exam.

Earlier, K.R. Nagar BEO Raju, who delivered the keynote address, explained about the Micro plan conceptualised by the SSLC Board for the exam for the benefit of students. He further said that the key features of the plan include strengthening of learning ability and skills of students, watching the progress of learning, discovering the weak points in learning and a comparative study of the students past and present academic performances and records.

Heads of 660 Government, aided and unaided High Schools of the district attended the seminar.