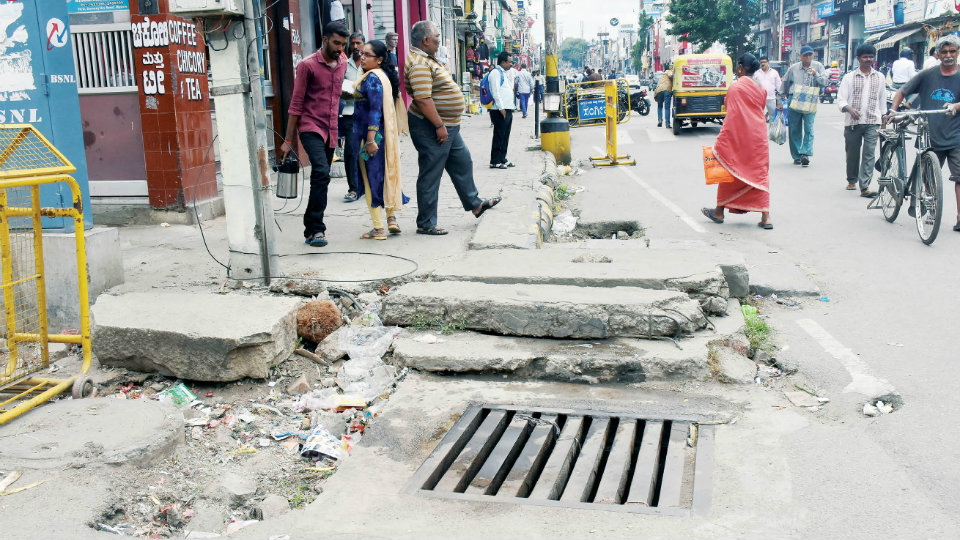 Mysuru:  Amid calls that the Government should first improve road infrastructure before imposing hefty fines for traffic violations, here comes the latest statement from our Deputy Chief Minister Govind Karajol: “Good roads and not bad roads are responsible for accidents.”

Probably, authorities in Mysuru are taking this statement literally and they have left bad roads unrepaired, forcing Mysureans to hop, skip, jump or dance to navigate across Mysuru’s footpaths and roads.  The city’s ill-reputed, pothole-filled roads and dug up footpaths are in the news again this Dasara.

Every Dasara, poor infrastructure is highlighted by the media and the Government carries out last-minute rush job. It is like practicing arms during a raging war. Invariably, such eleventh-hour works are shoddy as everybody takes their cut or percentage. And the cycle goes on and on, every year. This Dasara is no better, with pathetic infrastructure.

Forget outer roads and roads inside residential areas that look like a moon’s cratered surface, even the roads and footpaths around the Dasara ‘Centre of Attraction’ Mysore Palace are miserable and are in need of immediate attention. It is a ritualistic affair and every year the official machinery, headed by political bosses, gets on to the streets to repair broken footpaths, railings and fill potholes.

The crucial Bengaluru-Nilgiri Road on which thousands of tourists come to Dasara from Bengaluru and other places is full of potholes and one wrong move will result in either vehicle breakdown or loss of life or limb. The stretch between Government Guest House Arch Gate and LIC Circle has turned treacherous along with the stretches around Tipu Circle and Fountain Circle.

A sham of Raja Marga

While most of the tourists and locals would love to explore or commute through this beautiful city on foot, they are greeted by collapsed footpaths, potholed roads, lack of zebra crossings and locked subways.

The stone railings or balustrades erected on the Mysore Palace route via Sayyaji Rao Road up to Government Ayurveda College Circle under the much touted ‘Raja Marga Works’ (that began in 2010) have been destroyed and uprooted at many places.

It was the ambitious project of the MCC under the Rs. 100-crore special grant sanctioned by the State Government to give a royal touch to the Jumboo Savari route. Among the features proposed under the project were sculptures resembling elephants carrying “Ambari”, royal images, heritage lamp-posts that once adorned the streets during the time of the erstwhile Princely State and beautification of footpaths with Italian tiles. The grandeur now only remains on paper and in reality, the project has turned a sham. The place looks messier, making it tough to commute or walk.

Interlocking tiles fixed on footpaths have come out and protruding dangerously all along the Raja Marga and its surroundings including Palace, K.R. Circle, MCC Office, D. Devaraja Urs Road and towards Dasara Exhibition Grounds. As the tiles have come out in an erratic fashion, footpaths have become uneven with gaping holes causing a lot of inconvenience to commuters. Several people including senior citizens and disabled residents have tripped and sustained injuries.

Adding to this nuisance, many autorickshaw stands have been obstructing footpaths opposite K.R. Hospital and Cheluvamba Hospital, opposite KSRTC Sub-urban Bus Stand and near Railway Station Circle. In fact, there is no footpath at all on the right side of the stretch starting from Gayathri Bhavan Circle to Sringar Hotel Circle. Many roadside garages have mushroomed on this stretch, blocking way. And from Sringar Hotel Circle up to the Market, there is no space for pedestrians to walk.

If one decides to walk on D. Devaraja Urs Road, the pavement is uneven and bumpy all along the way. In many places — at least 100 meters of this whole stretch — tiles and concrete slabs have broken, twisted or there are gaping holes where traversing would certainly cause back pain or aggravate the symptoms if one has it already.

About a month ago, the administration started laying cables on the stretch starting from Old RMC Circle to J.K. Grounds Circle. The task is still unfinished as roadside cable bundles are found haphazardly occupying the street. In addition, there are a number of telephone boxes erected on footpaths near the J.K. Grounds Circle adding to the long list of woes.

While there are a lot of complaints pouring in from various city areas, the official machinery is yet to pull up their socks and carry out repair and restoration works. Their complaint is that day-in-and-day-out they attend various meetings and don’t have the time to supervise or direct works. And one meeting takes at least two to three hours and the entire official machinery is present there.

“Our day begins and ends in Dasara-related separate meetings called by the District Minister and the higher officials. In such a situation, how are we expected to carry out works before Vijayadashami? It is dark every day once we finish the meetings and clear routine pending files,” an officer told Star of Mysore.

Even if the officials and contractors have begun works at some places, intermittent rainfall is proving a challenge. The pothole-filled roads have to be filled with mud, jelly stones and M-Sand and then asphalted on the top. At many places, contractors have just filled mud and these spots are slushy as it is raining daily. Roads around Chamundi Vihar Stadium, Kalidasa Road and Yadavagiri are classic examples for this.

The condition of roads in Vijayanagar, Surya Bakery Road, Abhishek Circle and between University – SJCE Junction and Bogadi Main Road are pathetic as drinking water works are under progress on these stretches. Warning signs have not been put up and barricades are not erected, putting the lives of motorists under danger. And local residents complain that it has been more than a month and the work has not been completed.