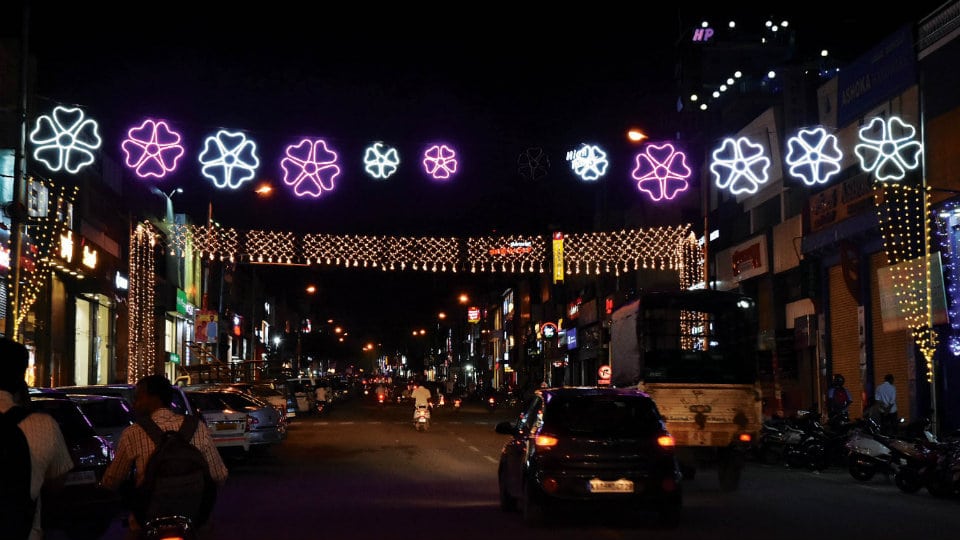 Dasara illumination to present a new hue to lure tourists

Mysuru:  If Paris in France is most commonly referred to as City of Lights, Mysuru will not be far behind this Dasara as 75 kms of the Heritage City and 91 Circles spreading up to Outer Ring Road junction will be illuminated, promising to be a visual treat.

This announcement was made when Mysuru District Minister V. Somanna released the posters of Dasara Illumination Sub-Committee last evening at the meeting hall of MUDA.

Last year, 54 kilometres of roads and 49 Circles were illuminated and Dasara illumination had hit headlines with heaps of praises from tourists. Somanna set a deadline of Sept. 25 for CESC to complete the works as Dasara starts on Sept. 29.

This year’s illumination will be different from what was followed all these years and in addition to public buildings and heritage monuments that will be lit up tastefully, the authorities are also planning to illuminate statues.

Illumination will require about 1 lakh units of power spread over more than 10 days. Hence the authorities have been directed to switch over to LED bulbs to reduce power consumption, especially around the Palace and other important tourist spots.

Twelve different designs are planned, including the replica of Goddess Durga of West Bengal in five places. The illumination will remain till Theppotsava (Coracle festival) atop Chamundi Hill. “Last year, the illumination was switched off on the day of Vijayadashami and this move had saddened the tourists and local hoteliers and businessmen who depend on tourism. This year, we have decided to extend illumination till the Theppotsava,” Somanna said.

Illumination is also planned at Srirangapatna at the cost of Rs. 10 lakh and Chamarajanagar at a cost of Rs. 15 lakh, the Minister revealed.

CESC Managing Director Dr. H.N. Gopalkrishna said that people should enjoy the lightings and should not come in contact with bulbs. “One Assistant Engineer and a lineman will be deputed at each Circle. This apart we will take steps to replace the fused bulbs,” he added.

Contractors have been asked to use newer materials and not again bring last year’s equipment, switches and wires. Also, the Minster directed CESC to illuminate the residential areas by the side of the Ring Road.

MLA L. Nagendra, DC Abhiram G. Sankar and others were present at the meeting.

At the meeting, it was announced that CM B.S. Yediyurappa will light the Dasara Sports Torch on Sept. 29 and it will reach Mysuru city on Oct. 1 after traversing across all the taluks of the district. The taluk-level sports are also being held as part of Dasara from Sept. 14 while Raitha Dasara will be held from Oct. 1 to 3. Aahara Mela will be held from Sept. 29 to Oct. 10 at Scouts and Guides Ground and at the MUDA land near Lalitha Mahal Palace Hotel.