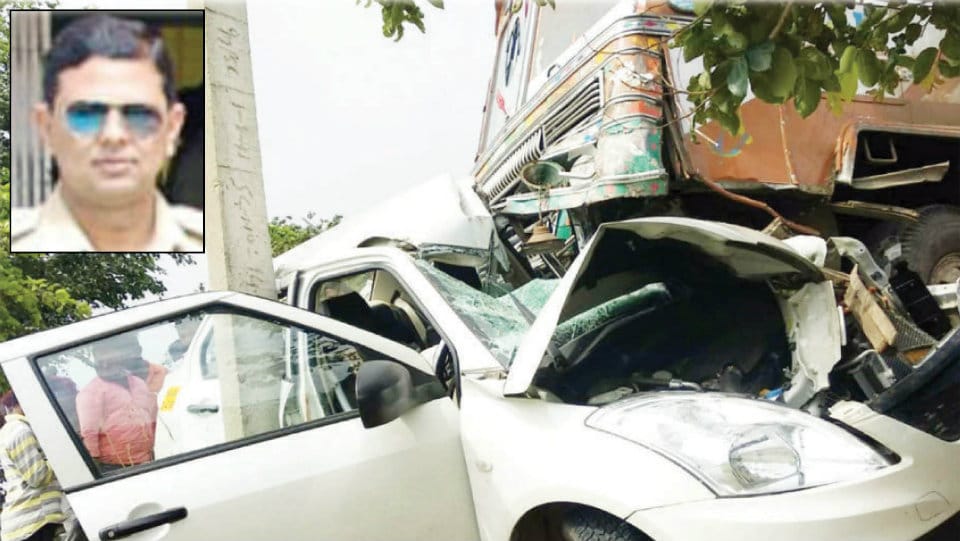 Was it a murder, wonder villagers at accident spot

The deceased has been identified as Abdul Naseem (45), a native of Shivanasamudra (Bluff), and a resident of Rajivnagar in Mysuru. The incident occurred at about 2.30 pm when the car (KA 09 D 4789) he was travelling was hit by a lorry (KA 34 A 4797) coming from the opposite direction.

Naseem, who had visited Mandya on an official work, was returning to Chamarajanagar when the accident took place. Naseem sustained grievous injuries along with driver Farooq. Villagers shifted the duo to T.Narasipur Government Hospital where they were given the first aid. However, Naseem breathed his last while being shifted to K.R. Hospital in Mysuru. Farooq is undergoing treatment.

T. Narasipura Circle Inspector M.R. Lava visited the spot. Bannur Police have registered a case and are investigating. People, who gathered at the scene of accident, were also heard murmuring about the accident being a possible planned murder to get rid of the Motor Vehicle Inspector.  Looking at the accident, they realised that the Inspector’s car was hit by the truck at a T Junction and there was no road for the truck to cross after it hit the car. On the other side, there is a field and the car, after hit by the truck, collided against an electric pole. The car was stopped by the pole and if not for the pole, the vehicle would have landed inside the fields.

The deceased officer is survived by his wife, a son, a daughter and host of relatives and friends. The mortal remains were handed over to relatives after conducting the post-mortem. His Namaz-e-Janaza was held after Jumma Namaz at Masjid-e-Azam on Ashoka Road this morning. The last rites were held at Old Muslim Burial Ground, opposite Tipu Circle.

Road accident
HDK’s political career was given on a platter by HDD, says GTD
Dasara illumination to present a new hue to lure tourists