Home » News » HDK’s political career was given on a platter by HDD, says GTD 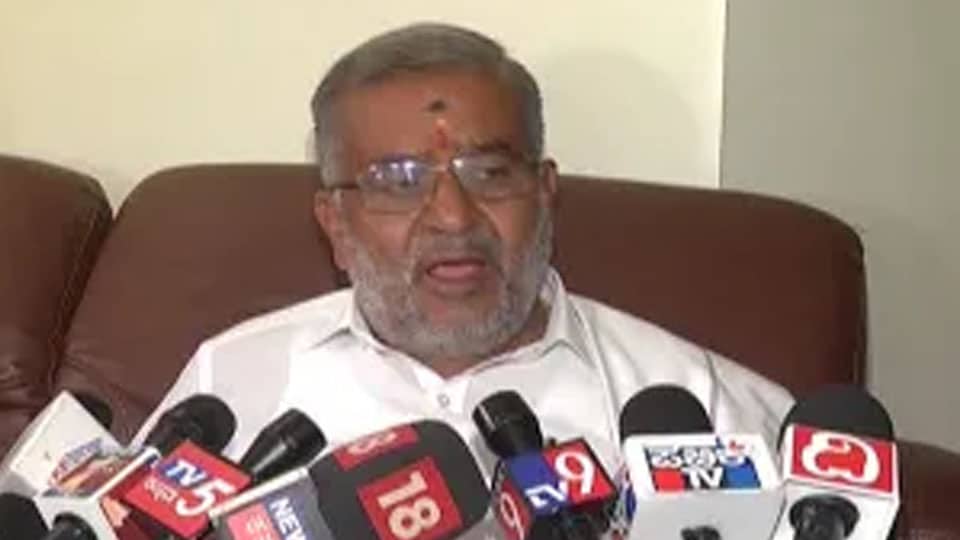 HDK’s political career was given on a platter by HDD, says GTD

Mysuru:  Explaining that he was not invited to attend the JD(S) party’s ‘Chintana-Manthana’ meeting chaired by former CM H.D. Kumaraswamy in city yesterday, Chamundeshwari MLA and former Minister G.T. Devegowda (GTD) defended his decision to skip the JD(S) meeting.

Speaking to press persons, GTD claimed that no party leader including the District and City JD(S) Presidents had extended an invitation to him. Venting out his anger against fellow party MLA and former Cabinet colleague S.R. Mahesh, GTD wondered why he was made District Minister during the Coalition Government, when Mahesh used to take the final call on every issue.

Asserting that he has grown politically on his own strength, GTD maintained that he had not spoken anything against JD(S) Supremo H.D. Devegowda (HDD) and former CM H.D. Kumaraswamy. GTD further said that he grew up in politics by himself without anyone’s support, while Kumaraswamy grew under the political leadership of former PM H.D. Deve Gowda.

“Kumaraswamy does not know hardships as Devegowda had worked hard and Kumaraswamy reaped the benefits by becoming the CM twice. I had no godfathers and I built my career from scratch while Kumaraswamy’s political career was handed over on a platter to him by his father. I have even ploughed fields,” he remarked.

Stating that H.D. Deve Gowda gave him the party ticket to contest the polls, because the JD(S) supremo knew about his political strength, GTD said that he was made a Minister in Coalition Government because he had strived a lot to build the JD(S).

Accusing Kumaraswamy of failing to keep his word on giving him (GTD) the powers equivalent to the Chief Minister if he won from Chamundeshwari segment against Siddharamaiah in last year’s assembly polls (as promised to voters), GTD said he was disappointed that he was given the Higher Education portfolio, when he was not much qualified educationally. Accusing S.R. Mahesh of misleading Kumaraswamy, GTD said he had tolerated all the insults he was subjected to within the party.

‘Kumaraswamy can send all JD(S) MLAs to BJP’

Hitting back at former Chief Minister H.D. Kumaraswamy (HDK), District Minister V. Somanna has said that Kumaraswamy can send all his JD(S) MLAs along with G.T. Devegowda, to BJP.

Replying to a media query on Kumaraswamy’s charge that the District Minister was only holding Dasara meetings while ignoring the plight of flood victims though being the Housing Minister, Somanna, who was addressing Dasara Illumination Sub-Committee meeting yesterday, said that he has already inspected flood-affected areas in H.D. Kote, Periyapatna, Hunsur and T. Narasipur taluks. Even the Chief Minister B.S. Yediyurappa has toured these areas.

The Government will shortly build homes for flood victims, he said and added that the Centre will release funds for rehabilitation works. Maintaining that he has sought the guidance of G.T. Devegowda as he was more experienced, Somanna said he has also sought the co-operation of another prominent JD(S) MLA from the district S.R. Mahesh.

Again referring to H.D. Kumaraswamy’s statement that he (HDK) himself had sent G.T. Devegowda to BJP to share his Dasara expertise, Somanna said he has no objection if HDK sends all JD(S) MLAs to BJP. Stating that Goddess Chamundeshwari had blessed Kumaraswamy till recently, Somanna said it was now the turn of B.S. Yediyurappa to be blessed by the Goddess and as such he has become the CM. Somanna further said that he does not want to talk much about H.D. Devegowda family.

GTD
HDK’s sarcastic best: We only have handed over GTD to BJP
Motor Vehicle Inspector killed in road accident