Home » Columns » Abracadabra By K. B. Ganapathy » Hindustan: A land of mighty temples-1 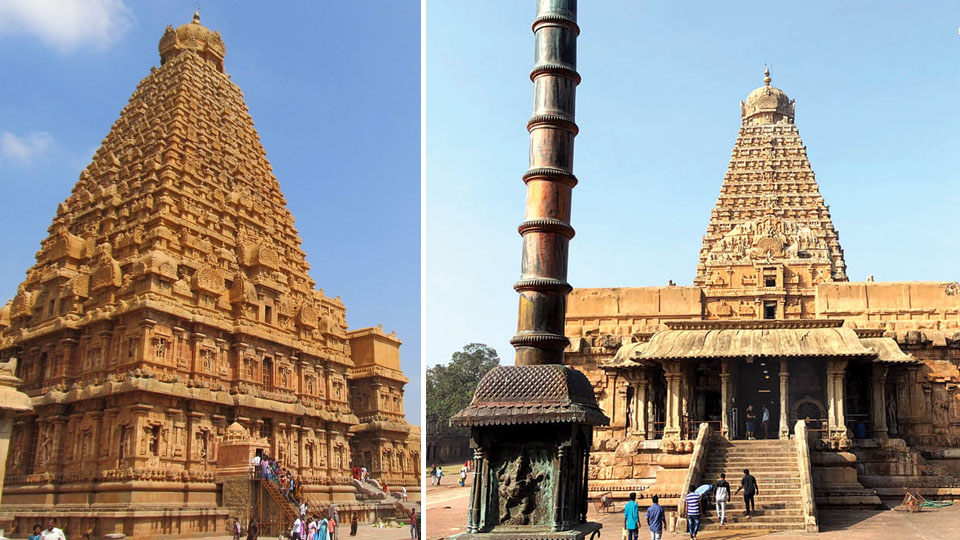 Hindustan: A land of mighty temples-1

It was in 1958, as I remember correctly, I went on a South India tour by train with a group of college students. I was studying at Madikeri First Grade College in Kodagu and our History Professor Muthuswamy, a Tamilian himself, was in charge.

Our first destination was Thanjavur to see the magnificent and mighty Brihadisvara Temple with its legendary 197 ft. tall tower (gopuram). We were told that at the pinnacle of the tower was placed a cupola, a single block of granite stone of  80 tonne weight.

Our Professor Muthuswamy went on rambling, explaining to his students the ‘engineering miracle’ executed by the architects of those days and gave a number of explanations conjured up by his fertile imagination. He told us that a six-mile-long ramp was built to lift the mighty single stone cupola and place it atop the tower as its crown. In fact, it seemed to us students, this singular engineering feat was the crowning glory of the Brihadisvara Temple.

I remembered my visit to the temple in 1958 once again when I went there on 11th of January, 2019. This time the tower looked different in colour — yellowish — than what I had seen in 1958. It was looking black. This 11th century temple built by the then King Raja Raja Chola I took seven years to build (between 1003 and 1010 AD). The huge temple complex and its architecture, so unique, it has been declared as the World Heritage Site known as the ‘Great Living Chola Temples’ by the UNESCO. It is claimed that it is built out of granite, the Vimana Gopura above the sanctum is one of the tallest in South India. The temple has very long and massive corridor and one of the largest, 12 ft. height, Shivalingas in India. I was told this was also the Fort of the King and therefore, the temple was built with a moat around as a defence against enemy attack.

Nearer home, we have these moats around Mysore Palace and also around the Fort in Srirangapatna. There is a huge Nandi Statue, the vehicle of Shiva, under a shrine. I found it a living monument because regular puja rituals are held and people do go there to offer worship. It may be mentioned that dead monuments are those where no daily or regular activities take place with only archaeological and tourist interest. The guide told us that on every Pongal Day, nearly 800 to 1,000 bullocks are brought here as part of worship and the huge courtyard measuring 240 mts x 120 mts would be filled with these animals pressing against each other. There are many sub-shrines for different deities in the temple complex.

The legend of Kannappa Nayanar was narrated to us in a very moving manner by our young guide qualified in engineering.  I was reminded of the Kannada film ‘Bedara Kannappa’ where the devotee of Shiva, Kannappa Nayanar finding an eye of the Shiva idol missing gorges out his own eye to transplant it into the hollow of the idol’s missing eye. The guide told us that Kannappa Nayanar was one of Lord Shiva’s 63 disciples.

Interestingly, Raja Raja Chola I had a guru by name Karuvoor Devar and there is a shrine built behind the temple in the same premises for this guru as well. History sometimes looks stranger than fiction. That was how I felt when our guide mentioned a war was fought inside the temple premises where the French garrison was billeted. It was the time when British and French were fighting against each other for dominance in that region of Tamil Nadu. As a result, a fierce war was fought here in which the French badly lost and had to withdraw to Pondicherry.

History records that Bhonsle dynasty of Marathas ruled Thanjavur from 1674 to 1900 till the 13th line of succession. Unfortunately for Marathas, the Law of Succession arbitrarily formulated by the British saw the end of Sambhaji Raja Bhonsle’s 44-year rule by one dynasty. It was something like what happened to Maharani Lakshmi Bai of Jhansi where, in the absence of direct line of succession, the Hindu tradition of adoption was not allowed and the kingdom came under the suzerainty of the British East India Company. The Rani of Jhansi fought the British and lost, but here the Bhonsle simply surrendered avoiding a war.

Later, we visited the museum which is so very well maintained and has most valuable artifacts of idols, symbols and sculptures of Lord Shiva in his various manifestations, including as Nataraja and a beggar.

For my query about why the statue of Nataraj, as the dancing Shiva, shows Shiva standing on a child-like idol, the guide answered saying that it was not a child but a dwarf demon symbolising ignorance by name Muyalavan.  Shiva was dispelling ignorance. This was a revelation to me. The guide continued to explain the symbolisms found in different Nataraja statues in different postures. On seeing a deer in one of his hands, I asked its significance. He said that a deer is a symbol of unstable mind and Shiva by holding it in hand symbolically suggests stopping of our unsteady and wavery minds.

Looking at another idol (see pic.) where Shiva has lifted his right leg to the height of his head, I asked the guide if it has any significance or it was just a dancing posture. He gave a rather naughty smile and narrated an incident. In a dance competition between Shiva and Parvathi, Shiva was finding it difficult to beat Parvathi but his male pride was not ready to accept defeat. Therefore, like Lord Krishna in epic Mahabharata, Shiva indulges in a deceitful act or works on Parvathi’s sentiments as a wife. Shiva suddenly lifts his leg to his ear and pulls out the earring. Now Parvathi has to match his posture and act. However, being a married woman, it would be inauspicious and a bad omen to remove her earring,  because such an act on her part would spell death to her husband. Lo and behold, the pride of man triumphs.

As we were moving around the museum, there was another idol of Shiva in a very strange posture — as a naked beggar with a begging bowl etc. The guide was very enthusiastic in explaining the story behind this idol.

It appears the Rishis of Himalayas became divinely very powerful as a result of tapas (penance and meditation). This made them so egoistic that they refused to worship Shiva as the Supreme Lord. Therefore,  Shiva decided to teach these arrogant Rishis a lesson.

One day he transformed himself into a naked beggar with his lingam lustfully visible with a coiled serpent ready to strike (see pic). He then went to the hermitage of these Rishis. And lo and behold! Guess what happened? It is said, in Hindu mythology there is no other deity who is so handsome, sexually attractive and capable of rousing the basic instincts of the opposite sex as Lord Shiva. Naturally, all the wives of those arrogant Rishis went after this beggar Shiva… deserting their husbands.

The Rishis realised their blunder and went after Lord Shiva begging that they would henceforth worship him as before and please return their wives to them. Lord Shiva, the beggar, gave a benign smile and said ‘tathastu.’ So be it.  Like the proverb, ‘Pride goes before the fall’ we can say here that ‘Pride goes before losing wife!’