Home » Columns » Abracadabra By K. B. Ganapathy » The Saffron Budget: Remembering Socialist Budgets of the past 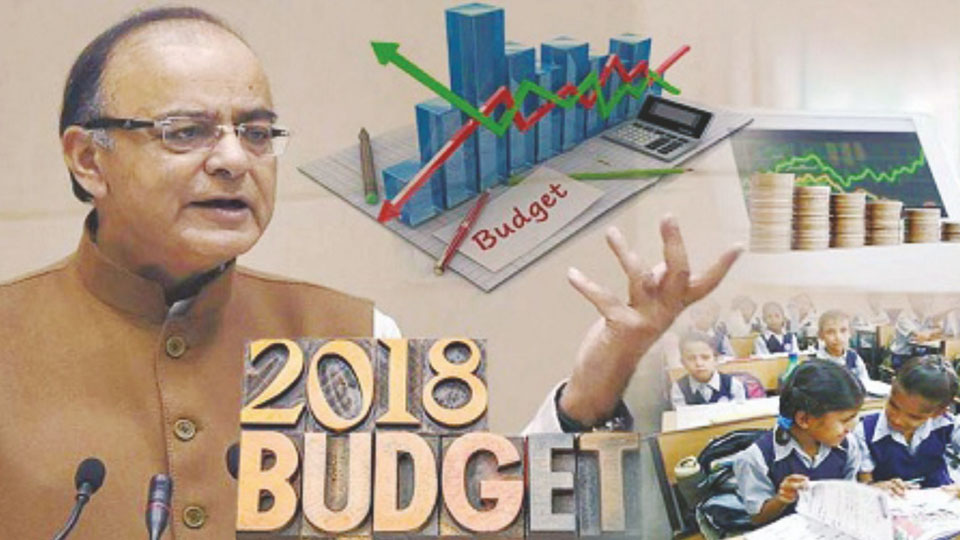 The Saffron Budget: Remembering Socialist Budgets of the past

Union Finance Minister Arun Jaitley must be an honest person. Which is why Prime Minister Narendra Modi chose him to guard the treasury of India and appropriate it for the good of the nation depending upon the need of different welfare and infrastructural projects and bring ache din that Modi had promised for we Indians in the Year of Our Lord 2014.

Now Arun Jaitley has to ensure that the promise of Narendra Modi, including Sabka Saath Sabka Vikas, is delivered.  And the Annual Budget is an opportunity to deliver these promises.

I still remember my Economics Professor in his first lecture saying ‘Man’s wants are many but means are limited.’ Means to meet those wants. It is where the wisdom of a budget planner comes in. His primary concern should not be tax collection but wealth creation for the nation. Winston Churchill has famously said that if you do not first create wealth for the nation, then you have only poverty to distribute to the poor. So do we need only an economist for this? I do not think so, though he may assist in providing data and assessing the growth. After all, an economist is one who knows the price of a commodity but never its value. Let it be.

Survival of the fittest and the smartest is the natural law which is applicable to all political parties in a democracy. The year 2019 is an election year for the Parliament. Naturally this budget of 1st February 2018 presented in the winter session of the Parliament is no doubt a budget that is election-centric. If Congress-led UPA could present a special extra-secular budget on an election season, why not NDA present a special saffron budget? Every ruling party plays its own game in a pre-election budget. Now the BJP-led NDA does the same.

Therefore, it is obvious Union Finance Minister Arun Jaitley has pulled out all stops in Narendra Modi’s last full budget with special love for farmers from where the bulk of the vote comes. I guess there is no reason for farmers to plead the Dickensian “Please Sir, Some more Sir.” The Government has decided to offer a Minimum Support Price (MSP) of a minimum of 1.5 times the expenses borne by farmers for all crops. I do not know if spices, coffee, tea, cocoa, coconut, areca nut etc., also come under this description of “all crops”.

Be that as it may, the wealth of the nation depends on other sectors too, apart from the farming one. Each year the State exchequer is replenished with the revenue generated from taxes. And it is here the skill of a Finance Minister comes to the fore. While causing wound to the income-generating entrepreneur, he should not hurt him. It is a balancing, tight-rope walking job. It is truly said that tax paid to the government and the dead body taken to the burial ground never return. Therefore, there is bound to be resentment from the people in the manner tax is levied on their hard earned income.

READ ALSO  One Nation, one Election: Do it now, tomorrow it may be too late !

I have not found much sympathy from the Finance Minister to individual, employed tax-payers. But 99% of the corporates that file tax returns will benefit because this budget (2018-2019) has extended the cut in corporate tax rate of 25% for companies with a turnover of up to Rs. 250 crore. Till now it was applicable only to firms with an annual turnover of Rs. 50 crore.

Incidentally, here is a case of my friend K.C. Biddappa, a retired Sr. Vice-President of ITC, who had offered an unsolicited advice to our Finance Minister Arun Jaitley on behalf of the pensioners like him, seeking concession in some areas. And lo and behold, as if Arun Jaitley had really gone through his letter and found sense in it, the budget had announced that there would be NO Income Tax on interest earned from the fixed deposits upto Rs. 50,000. Further, Rs. 50,000 can be claimed as tax rebate for general medical expenditure per year. Some mercy on the elder citizens.

The concept of levying cess is an evil to bleed the people by circumventing  the very principle of preparing a budget. Though it is supposed to be for a specific purpose and temporary it remains permanent.

Should anyone ask me what human condition I would like to avoid seeing, I would say when a person is sick, hospitalised and born with congenital disabilities or abnormalities. I would do my best to help such persons to the extent I can. After all, no matter one is rich or poor, upper-caste born or lower-caste born (in this caste-ridden country), or of this religion or that religion, of this race or that race, this country or that country, a human being is always susceptible to sickness, disabilities, old age and death.

Just because one is poor, the society or the government cannot allow him to his fate or destiny to suffer and die without proper medical treatment. Here I must congratulate the saffron party for introducing in this budget a health insurance scheme known as “National Health Protection Scheme” with a coverage upto Rs. 5 lakh for over 10 crore poor families. It must cover all the poor of the country but may not be possible now in one go. Let us give another five years to Narendra Modi, like we gave a second term to Congress-led UPA which, however, squandered the opportunity. Let us hope in its second term NDA will cover all the poor of this Punya Bhoomi (!), the ancient land.

Here I am reminded of a very apt remark of Osho Rajneesh as to how a good man should be and I think this should be applicable to all governments. He was talking about the attire of his disciples. The ochre, Kavi, saffron robe should not be a camouflage to cover your conceit and negative qualities. Saffron suggests you are always, 24×7, in a wakeful state that Buddha taught. Once you attain that state of consciousness, throw away the saffron and wear anything you like. Which is why Osho Rajneesh later asked his disciples not to call him Bhagwan, as they used to, wear any kind of clothes and keep aside the locket with his picture. I thought of Jiddu Krishnamurti.

Thus, no matter you belong to a saffron party or a red party or a white party or a green party, at the core you must essentially be a good, kind and compassionate person. Only then you as a ruler can reach out to the people ensuring roti kapada aur makaan, the basic requirements of a human being to live with dignity, if not in luxury.

Now let me recall how this business of budget was perceived in the past. In some of the budgets during Nehru’s days of ‘Licence and Permit Raj’ and Indira Gandhi’s desperate days, we found the Finance Minister acting as a killer of the goose that laid golden eggs. How can the economy grow? Why Trump’s ‘America First’ has worked which is clear from his ‘State of the Union’ speech made a few days ago and why Modi’s ‘Make in India’ failed? For simple example ask those who were running granite industry. This foreign exchange earning industry, providing employment to lakhs, is now dead.

Finding that India’s treasure is hidden in the houses — on women’s body and in the jewel box — the then Finance Minister of piskey reputation introduced the much hated ‘Gold Control Act’ sending jewellers and housewives into a spin. A man absolutely without a sense of humour, for once thought he was being humorous when he said in his budget speech giving some concession to women under this Act, “What God has enjoined, let no man cut asunder.” But at the end he remained a Nakshatrika of Satya Harishchandra of our mythology.

Does he mean that after one more year, Modi will not come back and he will be the Prime Minister? Rahul Gandhi’s dynasty was ruling this country for the past 50 years but could not solve the problems he had mentioned. Do we need this dynasty to rule us again?