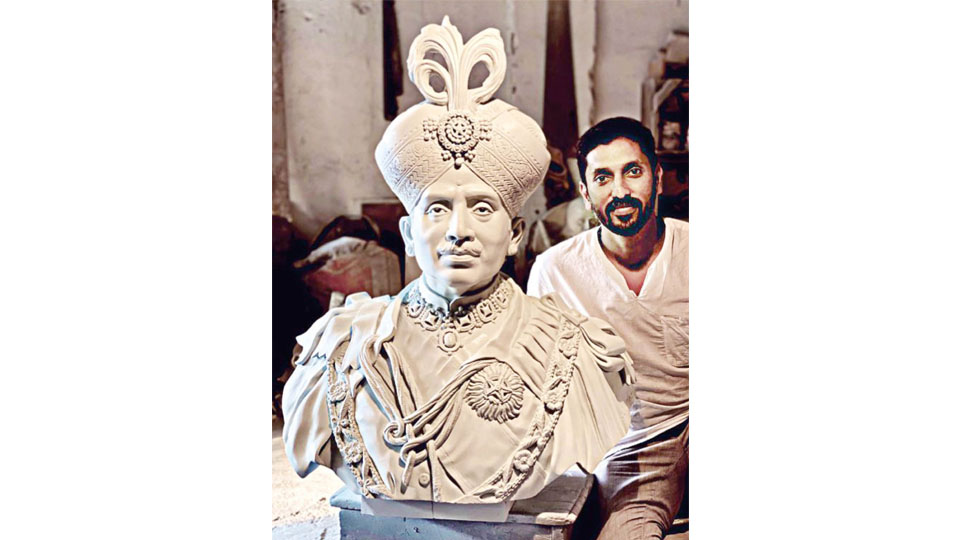 Mysore/Mysuru: The iconic Lalitha Mahal Palace, one of the city’s most famous landmarks at the foothills of Chamundi, turned 100 last year. Commissioned by Nalwadi Krishnaraja Wadiyar to treat his guests, he laid the foundation stone of this palatial building on Nov. 18, 1921. The architecture was inspired by the St. Paul’s Cathedral in London.

To mark the centenary celebrations, the State Government had ordered a bust of Nalwadi to be carved and the same was entrusted to Mysuru’s sculptor Arun Yogiraj who had gained national attention after carving the 12-feet 3D statue of Adi Guru Shankaracharya in sitting posture which was unveiled by Prime Minister Narendra Modi in November 2021 at the Kedarnath Temple in Rudraprayag district of Uttarakhand.

Speaking to Star of Mysore, Arun Yogiraj said that he got an order to carve Nalwadi’s bust from the Tourism Department in October last year and 90 percent of the works have been completed. “It is a single stone bust and the stone is black schist (Krishna Shile) from H.D. Kote. The bust weighs 450 kg along with the pedestal. The bust has a height and width of three feet and along with the pedestal it will be five feet,” he added.

He said that the Mysore royal family had helped him to access rare photos of Nalwadi. “Pramoda Devi Wadiyar readily offered help and enabled me to access photos of the late Maharaja wearing the royal attire. We studied the features when he was at different stages of his life and then arrived upon a design. His facial features were matched with whatever photos that were available,”  he explained.

The Tourism Department has plans to conduct a grand centenary celebration befitting the stature of the Lalitha Mahal Palace and it all depends on the plateauing of the COVID third wave, he added.