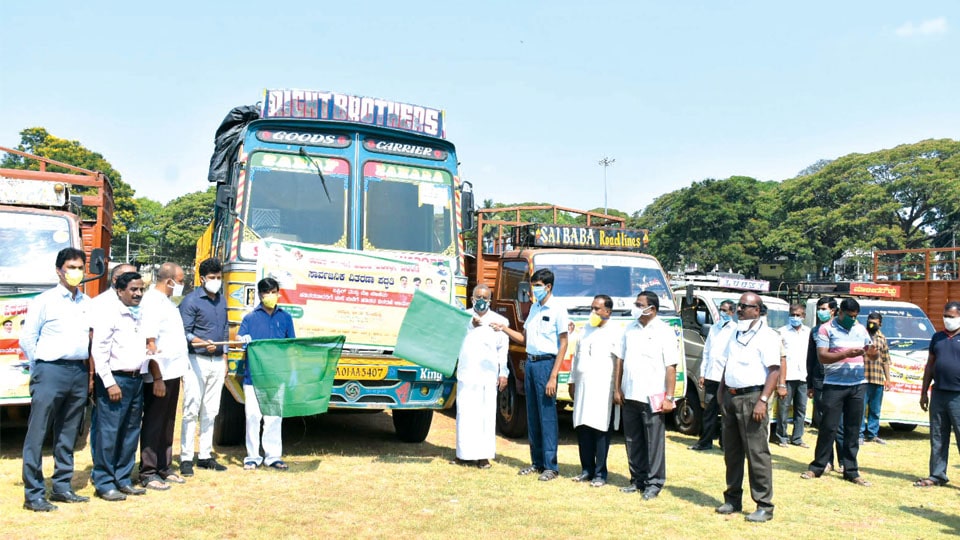 Mysuru district first in State to introduce this initiative

Mysore/Mysuru: Following the COVID-19 Nationwide lockdown,the district administration, in a bid to ensure that every citizen gets essential commodities, today launched home delivery of ration (for April and May) to households in the district.

Speaking on the occasion, MLA G.T. Devegowda said that the State Government in order to ensure that no person is left to suffer from hunger, has launched this novel initiative, following the COVID-19 Nationwide lockdown.

Noting that all Antyodaya, Below Poverty Line (BPL) and Above Poverty Line (APL) card holders will be delivered two months’ ration (April and May) at their doorstep, he said that persons who do not hold any such cards too will be listed by the authorities after a survey and supplied  ration thereafter.

MLA Ramdas said that the home-delivery of  rations is being carried out in Mysuru, the first district in the State to launch this novel initiative, in keeping with the intentions of Prime Minister Narendra Modi and Chief Minister B.S. Yediyurappa that no person should starve.

Pointing out that rations for two months is being delivered in advance to households, he urged the people for judicious use of ration. He also warned that  legal action will be taken against those indulging in black-marketing of rations. This novel initiative has been launched in order to avoid congestion in front of ration shops and also to prevent people from coming out of their homes.

While the ration is free for Antyodaya and BPL card holders, APL Card holders will be charged Rs.15 per unit.