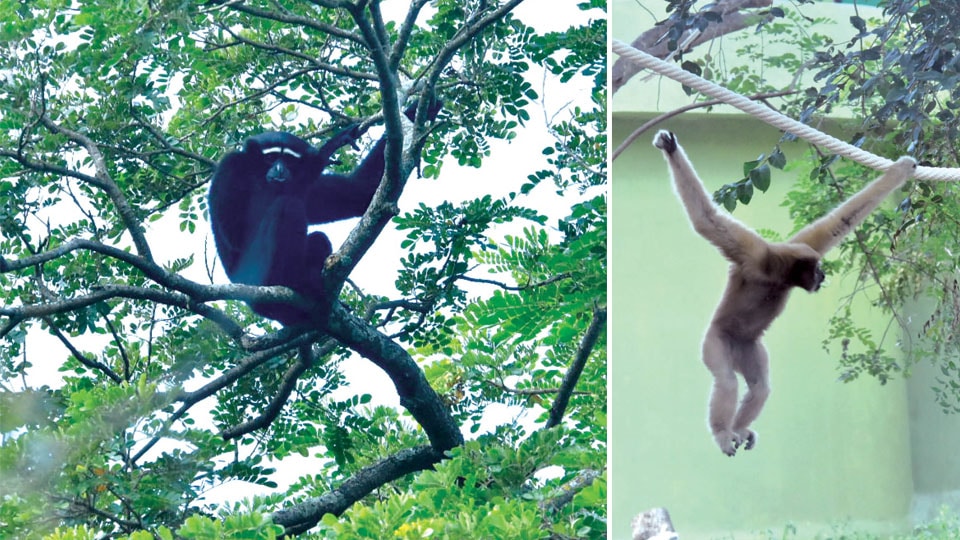 Mysuru/Mysore: On New Year Day today, Forest Minister C.C.Patil inaugurated the public display of a pair of Hoolock Gibbons at Mysuru Zoo.  These animals were brought from Assam Zoo as part of animal exchange programme.

Speaking on the occasion, Patil said that Hoolock Gibbons, which is an endangered species, has been brought to Mysuru Zoo in order to entertain visitors.

Pointing out that Mysuru Zoo is one of the leading Zoos in the world, he said that Zoo lovers will get a chance to see this rare and endangered species.

Earlier in the morning, the Minister, continuing his temple run, visited Chamundeshwari temple atop Chamundi Hill and offered special prayers to the deity.

On Tuesday, the last day of the year 2019, Patil visited Himavad Gopalaswamy Hill in Gundlupet taluk and offered prayers to the deity. He was accorded a ‘Poorna Kumbha’ welcome by the Temple Chief Priest Gopalakrishna Bhat.Later, Patil went to Bandipur National Park, where he inspected ‘Fire Line’ works. Taking note of the huge destruction of forest caused by forest fires in February last, the Minister directed the officials to ensure that such fires do not recur for whatever reason.

From Bandipur, Patil visited Basaveshwara temple at Hangala in Gundlupet taluk and offered prayers to the deity. Later, interacting with the villagers, the Minister said that he would speak to the authorities on erection of Railway track fencing to prevent wild elephant menace in the village, especially during summer.

On Monday evening, Patil arrived at M.M.Hills from Bengaluru by road and performed special puja at MM Hill temple.The Minister was honoured by the temple priests. DCF Yedukondalu and other officials were present.