Home » Columns » Abracadabra By K. B. Ganapathy » How to cure our officials from MAFA disease? 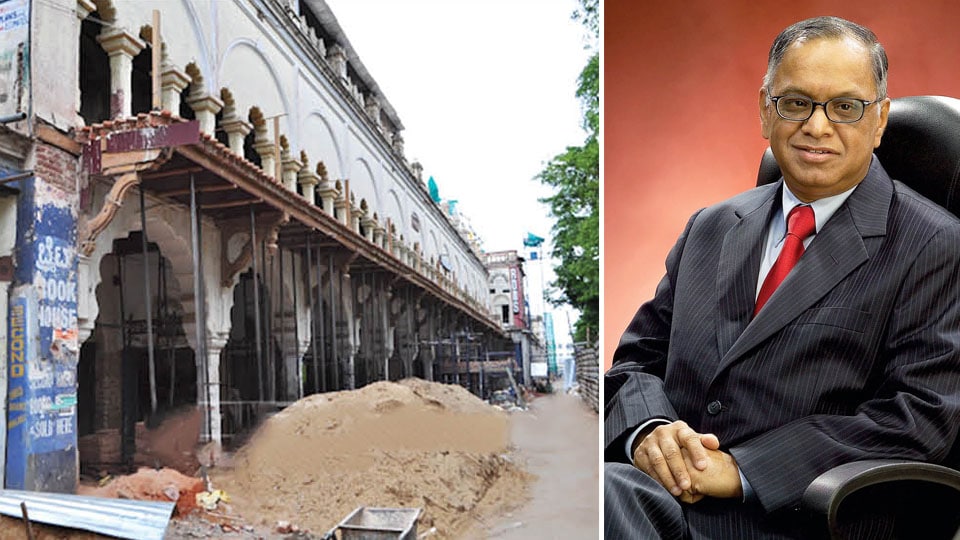 How to cure our officials from MAFA disease?

You are warned. These heritage buildings will collapse !

It seems our Government officials are suffering from a disease called MAFA. An abbreviation, acronym for an official mindset of Indian bureaucrats coined by N.R.  Narayana Murthy of Infosys. MAFA means ‘Mistaking Articulation For Accomplishment.’ Meaning, these officials think just by perpetually talking about a problem, it is akin to solving the problem.

In many parts of our country, it is not raining. It is pouring as if there is a breach in the sky. Mysuru is no exception. Many days in the latter part of last month July and now into the second week of August 2019, sun did not seem to have risen to its zenith at all casting a gloomy, melancholic, wet atmosphere over the city and its neighbourhood. Last afternoon between 2 pm and 3.30 pm, there was bright and warm sunshine and I did not miss to bask in its warmth before it turned dark, murky and rainy to last the whole evening into the night.

Yesterday being Sunday, I had decided to stay put at home scanning the Sunday papers with extra pages, but yielded to the urge to get under the blanket and doze off the cold forenoon. Then the call came from the Bapuji Children’s Home, requesting if I could see the moving spirit of the Home, Alok Gupta, to talk about the new concept of fostering the children of the Home before adoption etc. Such a humanitarian care and concern in a society lacking in human face, I  headed to the office to meet our city’s Guardian Angel, Alok Gupta.

In the car, I picked up the day’s newspaper and began to read about the meeting of officials of Mysuru City Corporation (MCC), Mysuru Urban Development Authority (MUDA) and Heritage Department (Department of Archaeology, Museums and Heritage) presided over by MLA L. Nagendra (BJP) of Chamaraja Constituency.

It was clear that the trigger for holding this meeting was the collapse of the 121-year- old heritage portico of Saraswathipuram Fire Brigade building last Friday. The most important and the only decision taken after prolonged discussion was the declaration by the in-charge MCC Commissioner P.S. Kantharaju that he would issue notice to the Departments represented at the meeting to provide information to him about the condition of the heritage buildings in the city numbering 132.

According to MCC Commissioner, there are 200 heritage buildings in city but in view of the collapse of the Fire Brigade portico, only 132 of them were declared as heritage buildings. Funny and also foolish. An ancient, old building of historical value does not become heritage building by virtue of it being declared so by a Government official. There must be a defined architectural criteria for a building or a structure to be considered a heritage one.

Curiously, the Deputy Director of “Heritage” Department was talking about the Fire Brigade not providing the blueprint etc., for the renovation of Fire Brigade Quarters when in fact the subject of concern should be the portico that had collapsed. Diversionary tactics of Government officials on such occasions is swallowed by our MLAs with glee. This was four years ago and there was no mention of the portico. And it was the portico that had collapsed due to the Department’s negligence, nay dereliction of duty. It is in this context that Narayana Murthy’s comment comes — that our Government officials are suffering from a condition known as MAFA — Mistaking Articulation For Accomplishment.

What did the MCC Commissioner and the Deputy Director accomplish after the meeting? Simply, MAFA!

According to the report, the last word came from the people’s representative Nagendra. In great flourish, he declared that either demolish and rebuild the heritage buildings that have lived their lives or renovate wherever it is possible. But to whom was he addressing these opinions? According to the Additional Deputy Commissioner (ADC) B.R. Poornima, who was present, in such situations, the matter should be brought to the attention of the Deputy Commissioner (DC) and get his suggestion and direction. Yes, then what? Why the DC was not approached for four years with regard to Fire Brigade works? There was no answer to this question. Even the DC did not seem to be taking any punitive action against officials who practice ‘MAFA’ as Japa or Mantra.

And then, for God’s sake, tell us where the buck stops? Is it at the table of the DC? If so, DC must be held responsible for the disrepair and collapse of heritage buildings. Right now there are three major heritage buildings ready to collapse, if this kind of rains continue for another 10 or 15 days. They are: 1. Lansdowne building (vacated by its occupants nearly seven years ago in 2012); 2. Devaraja Market, already collapsed in the Northern part along Dhanvanthri Road in 2016 and 3. The monumental massive, ornate Arch Gate at the Northern side of Government Guest House at the junction of Mohammed Sait Block, near the Mosque.

If the DC is the decision-making authority, let him act and say so to the Government for the final decision. There is no point waiting for the buildings to collapse, God forbid, taking precious lives. Time, B.S. Yediyurappa’s BJP Government decides to put an end to the MAFA disease from which our Government officials are suffering.

4 COMMENTS ON THIS POST To “How to cure our officials from MAFA disease?”