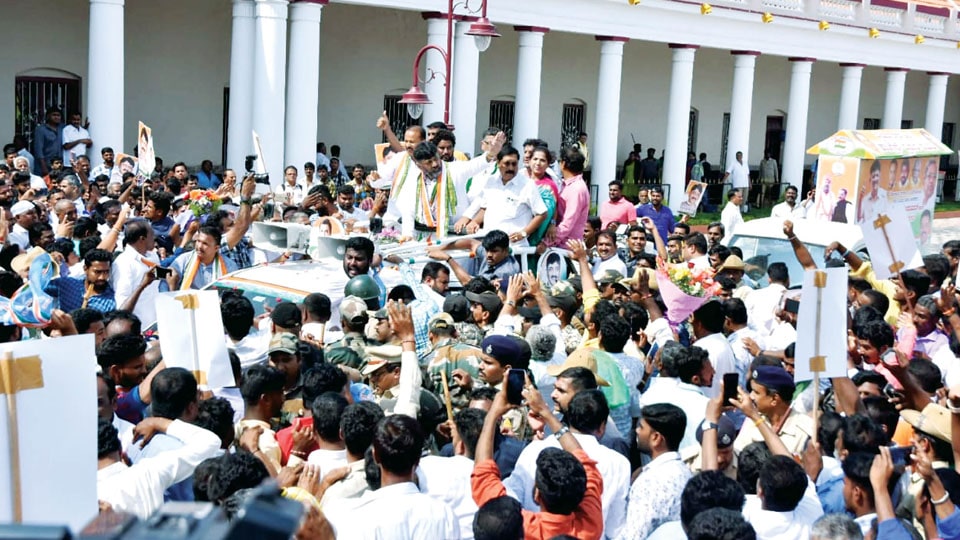 Mysuru: Senior Congress leader and former Minister D.K. Shivakumar, who was released from New Delhi’s Tihar Jail recently, was given a rousing reception by thousands of Congress workers upon his arrival at the City Railway Station this morning.

This is Shivakumar’s first visit to Mysuru after his release from jail. He was arrested by the Enforcement Directorate in connection with a money-laundering case in the first week of September and was released from Tihar Jail about a fortnight ago after a Delhi Court granted him bail.

Shivakumar, along with former Hunsur MLA H.P. Manjunath, arrived in city by Chennai-Mysuru, Shatabdi Express from Bengaluru at about 1 pm when thousands of party workers at the Station greeted him by raising slogans hailing him.

Party workers jostled to present bouquets and garlands to the Congress leader. Crackers were burst near the Babu Jagjivan Ram Circle just outside the Railway Station for a long period. Shivakumar was also presented a huge apple garland.

After coming out of the Railway Station, Shivakumar was taken in an open jeep to the City and District Congress Office located at a stone’s throw distance from the Railway Station. The procession was accompanied by a host of folk troupes even as enthusiastic party workers continued to burst crackers.

The Police had a hard time in controlling the crowd which was eager to see Shivakumar from a close range. Police had cordoned off the stretch of JLB Road from Jagjivan Ram Circle to H.C.  Dasappa Circle for over an hour which inconvenienced motorists and pedestrians. The City Police had deployed over a hundred Policemen to regulate the crowd.

Shivakumar will address the party workers at the Congress Office which was a buzz of activity right from the morning. The entire site of the office was covered with shamiyana with the building itself specially decorated.

MLAs Tanveer Sait and R. Narendra, former MLA M.K. Somashekar, former MP R. Dhruvanarayan, City Congress President R. Murthy, District President Dr. B.J. Vijaykumar and a host of other Congress leaders were among those who received Shivakumar, who is scheduled to go on a two-day temple run in Mysuru and Mandya starting this evening.

3 COMMENTS ON THIS POST To “Huge crowd welcomes D.K. Shivakumar”