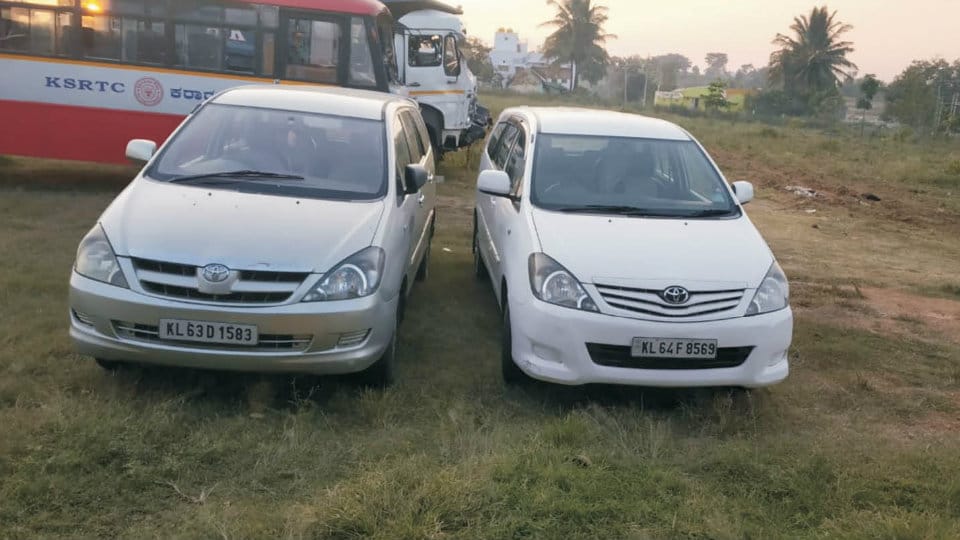 Hunsur: Hunsur Police, who traced three teams of dacoits waiting to loot those carrying hawala money from Kerala to Bengaluru, have arrested nine dacoits of two teams and have seized three cars from them.

The  dacoits of the second team, who were arrested at about 1.30 am, are 30-year-old Nikhil of Neeramankara Perampalli village, 39-year-old Nayaz of Taliparamba Syed Nagar in Kannur district, 47-year-old Saji Josh of Poyal Church Camp in Eratti taluk, 37-year-old Anish Thomas of Mundayamparamba village and 36-year-old Ritish of Muppalam village.

As soon as the Police arrested the dacoits of the two teams, the members of the third team comprising Sukhish, Razak and Crush left their car behind and escaped, according to the Police who also said that one Subbu was the leader of the three teams of dacoits, who had hatched a plot to loot.

Details: Hunsur Police, who were patrolling Hunsur Highway on Monday at about 11.30 pm, saw an Innova SUV (KL-64 F-8569) with four persons inside it parked near Kuppekolagatta  in a suspicious manner and took them into custody. On enquiry, the Cops came to know that they were the members of a dacoit gang led by one Subbu.

On further interrogation, they reportedly told the Police that there are three teams of dacoits on the road from Yelwal to Thithimathi, waiting to loot hawala money.

The Hunsur Police immediately got alert and proceeded on the road from Yelwal towards Thithimathi during which they found another Innova SUV (KL-63 B-1583) parked about 50 mts. inside the forest area and immediately surrounded the vehicle and nabbed the dacoits of the second team.

The Police also found another car (KL-08 AY-1794) parked at a distance, but the occupants of the vehicle had escaped into the forest. The Cops then seized the car and on inspecting the seized vehicles, they (Police) found iron rods and sticks inside them.

The arrested dacoits were produced before a Court, which has remanded them to judicial custody.