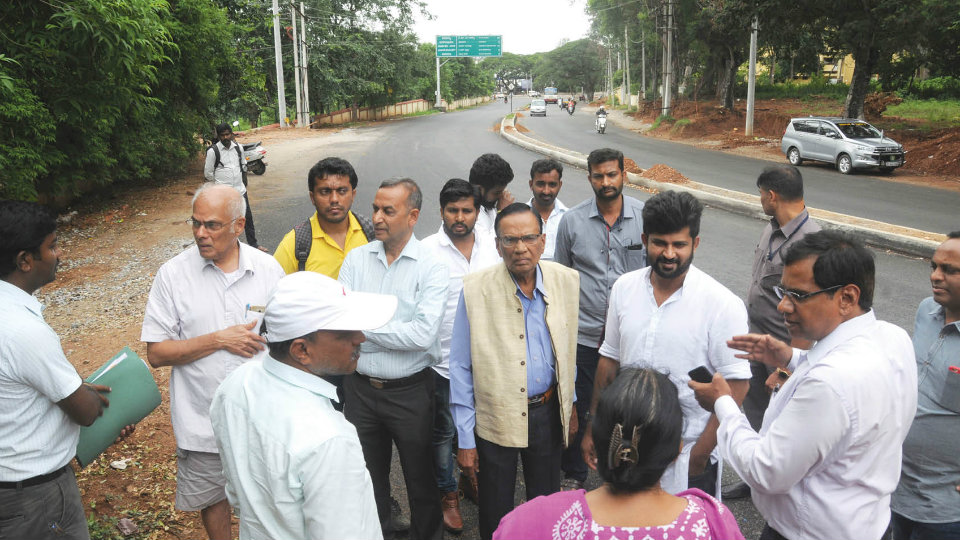 Mysuru:  Only five trees will be felled for straightening or road widening project on the accident-prone curve between Field Marshal K.M. Cariappa Circle (Metropole Circle) and Valmiki Junction near the Jaladarshini Guest House. Due to severe opposition from the environmentalists, the original plan of road straightening could not be taken up and instead adjustments have been made in the project.

The original project was to straighten the steep-gradient road to prevent accidents and it involved cutting of over 100 fully-grown trees. Following opposition from residents and environmental groups, the number of trees to be cut was reduced to six. Now an additional five trees will be cut. Rs. 12.5 crore for the project was released by the Centre under Central Road Fund.

After the meeting, the team went on a spot inspection where the MP appealed to the Forest Department to clear trees as they are obstructing the free movement of pedestrians especially, students of the newly-built Maharani’s College of Commerce and Management at Paduvarahalli (Vinayakanagar). Even earlier, similar appeal was made and the MGP had moved the Court against cutting of trees.

During the spot inspection, the MP argued about the “black spot” at two curves near Jaladarshini Guest House and justified increasing the radius of the road on both sides to facilitate higher speed. Based on the technical analysis provided by MGP members Maj. Gen. (Retd) S.G. Vombatkere and retired engineer Bapu Satyanarayana, the MP was informed that there was no need to increase the road radius. However, they agreed that adequate footpath space must be provided for safe movement of students of Maharani’s College. 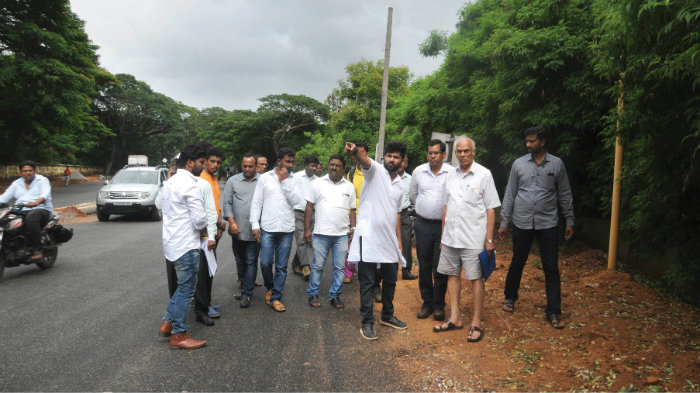 It was also resolved to provide 2.5 metres footpath on Jaladarshini side instead of three metres while a three-metre footpath will be provided on the Kukkarahalli side. Road will be widened on both the sides of the road divider to the width of 8.4 metres instead of 9 metres.

As per the original plan, the road was to be widened on both the sides of the divider up to 9 metres as according to Indian Road Congress (IRC), the Apex Body of Highway Engineers in the country, as there is a curve, there needs to be additional width of 9 metres. But here MGP members argued that while the width from Kalamandira was 7.5 metres, there was no need to widen the road till 9 metres.

“The IRC might have suggested additional width based on faster speed. We insisted on 7.5 meters which allowed vehicles moving up to 50 kms per hour which is higher than 40 kms per hour as per the road sign here.

As the road on the Kukkarahalli side was already around 9 mts we agreed on 8.4 metres. For this, the authorities will move the road divider to provide more width on Jaladarshini side,” Bhamy Shenoy told Star of Mysore.

They also resolved not to touch the ‘heritage wall’. “The radius of the road will be around 100 metres and not the originally announced 120 metres. In other words, widening or increasing the radius is only to provide for adequate footpath and not to allow for higher speed. The PWD engineer will furnish the final drawings before commencing the work and the Forest Department will give permission to cut five trees,” he added.