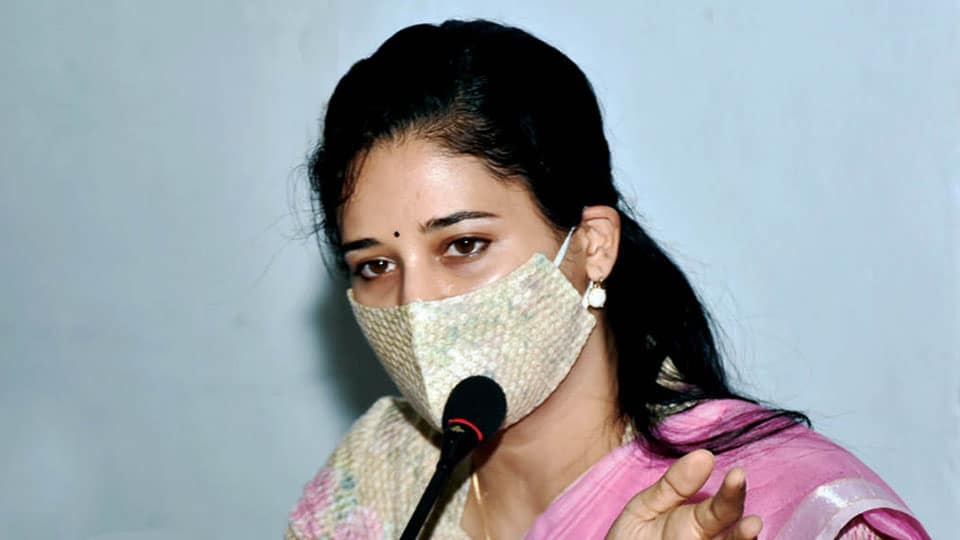 I Paid the Price for confronting Land Mafia

Rohini Sindhuri speaks as she leaves Mysuru with a ‘heavy heart’

I had tried to clear encroachments of Kergalli Lake and rejuvenate it. I wanted to save 1,500 acres of Survey Number 4 (Kurubarahalli) by assigning a good lawyer to fight the case in the SC. I would have continued as DC if I had not taken on the land mafia.

Thank You Mysuru, I am leaving with a heavy heart, as a daughter leaves her parental home.

Mysore/Mysuru: Breaking her silence for the first time after being transferred from Mysuru as Deputy Commissioner, Rohini Sindhuri said that Mysuru is like her parents’ home (thavaru mane) and she was grateful for the love showered on her by the people of this district, who have treated her like their own daughter.

She was speaking to reporters at Government Guest House in city this morning before leaving to Bengaluru to take charge as Commissioner for Hindu Religious and Charitable Endowments.

“I did not expect this transfer and I was asked to leave the district at a time when I was doing good work. What happened and how it happened is known to everyone. It is wrong to think that ‘a mission is accomplished’ after abruptly transferring an IAS Officer. It is difficult to run a system if these kinds of developments take place, be it a district or any institution and I will not react much on the issue,” she said.

Though she refused to elaborate, Rohini Sindhuri spoke about land mafia in Mysuru and the involvement of certain political leaders in land dealings. “I was not allowed to work. Some people unnecessarily troubled me as I had tried to clear encroachments of Government lands. As a DC, my prime responsibility is to save Government land, Lakes and other public properties. I was doing this work from the day I took over as DC and I got into the wrong books of a few. I was a victim of  conspiracy,” she said.

“I had tried to clear encroachments of Kergalli

Lake and fill clean water into it for rejuvenation. I wanted to save 1,500 acres of Survey Number 4 (Kurubarahalli) and wanted to assign a good lawyer to fight out the case in the Supreme Court. I would have continued as DC if I had not taken on the land mafia,” she said cryptically indicating the extent of work her office was doing in the last eight months.

On former MCC Commissioner and fellow IAS Officer Shilpa Nag whose outburst was the genesis of the whole issue that ended in abrupt transfers, Rohini Sindhuri said, “I have pity on her. It is quite clear from her words that she faces insecurity and she has vented her ire at me out of this frustration and insecurity. I can only say that I feel sad for her. I cannot say anything beyond this. There is a particular procedure for all IAS Officers and I have not violated these procedures.”

With her voice breaking, Rohini Sindhuri said that she was leading exemplary work in Mysuru’s COVID control. “We are Numero Uno in vaccination in the State and I had set a target of a COVID-free Mysuru by July 1. This would have been achieved but now I have to leave,” she said.

“Thank You Mysuru,” she said as a word of praise for Mysureans for treating her like a daughter. “I had come to Government Guest House to meet the new DC and I have explained in detail about the COVID work in both city and district and I am leaving with a heavy heart, as a daughter leaves her parental home,” Rohini said before boarding her vehicle.