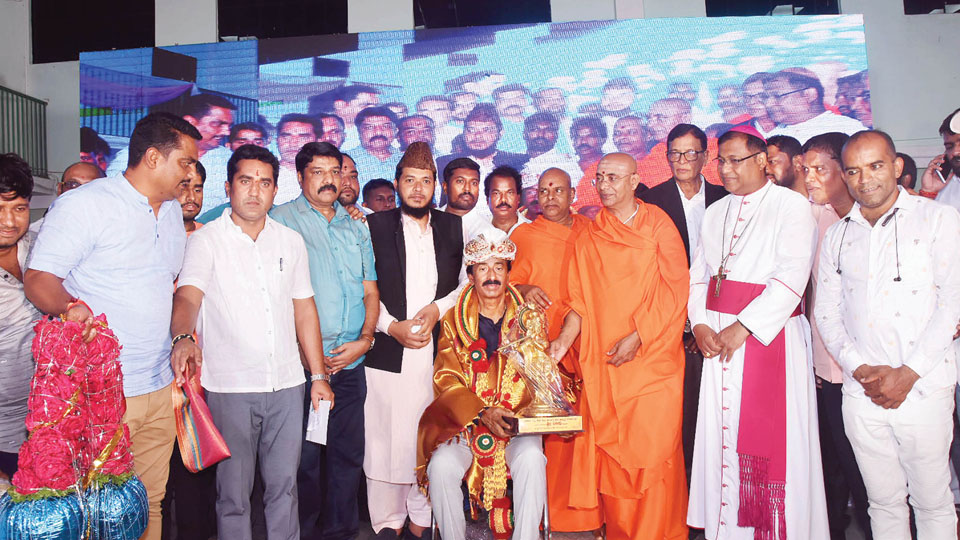 Former MLA Vasu speaks his heart out at felicitation event

Mysore/Mysuru: Former Chamaraja Constituency Congress MLA Vasu has expressed gratitude for each and everyone who supported him in his public service as an MLA.

He was speaking after being felicitated on his birthday and for having received the prestigious Sahakara Ratna State Award at a programme organised by his supporters and Janaspandana Foundation at Leela Channaiah Samudaya Bhavan on Valmiki Road here yesterday.

Noting that he began public life as a Director of Karnataka State Co-operative Bank way back in 1976 and then served as its Vice-President and President, Vasu said that he entered politics by contesting the MCC polls in the 1980s and later became the city Mayor.

Pointing out that he served as Political Secretary to the then Chief Minister Dr. M. Veerappa Moily (1992-94), Vasu said though he contested from Chamaraja Assembly segment four times, he won only once in 2013. Maintaining that he was not deterred by his defeat, the former MLA said that Chamaraja was close to his heart and he still wants to serve the people, whether he is in power or not.

Recalling the works he had done when he served as MLA (2013-2018), Vasu said he was happy that many Government Hospitals came up along KRS Road during his tenure. Contending that Kidwai, NIMHANS and Nephrology Units and many such developmental works were all his plans, for which lands too were identified, Vasu said that he felt satisfied with his work as an MLA.

Maintaining that no Royal family in the country had worked for the well-being  of people like the erstwhile Mysore Maharajas, Vasu said he was carried away by the love and affection bestowed on him by people from all sections of society and leaders irrespective of party affiliations.