Home » Feature Articles » ‘I want every youth to become a Soldier’ 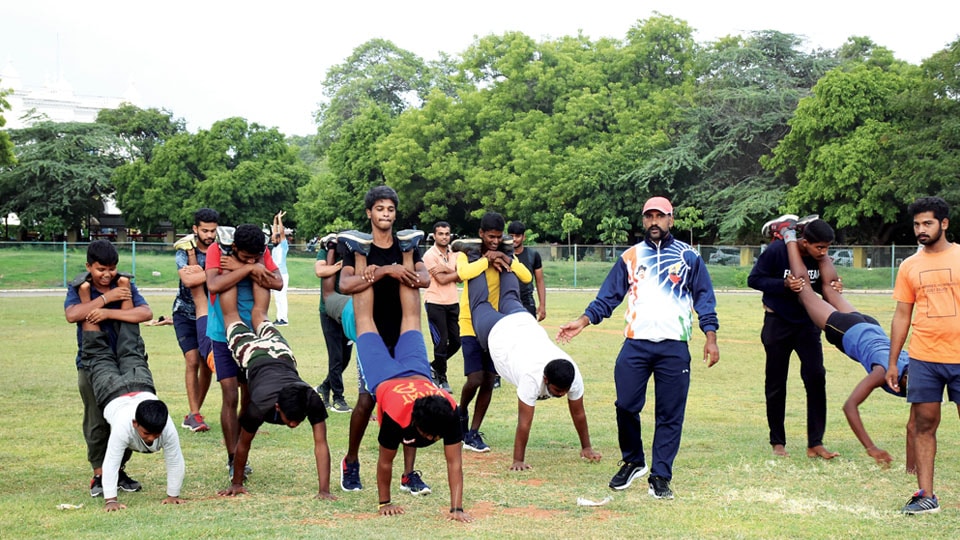 ‘I want every youth to become a Soldier’

Martyrs and families easily forgotten after paying 21-round gun salute

Once a soldier always a soldier, goes a famous proverb. And for a soldier, the nation always comes first, followed by family and then friends, even when he is on leave. One man who exemplifies this adage is Yodha Ravi from Mysuru.

Next time when you visit the Oval Grounds opposite the Crawford Hall at around 5 am, you will hear a bunch of voices calling out on top of their voice “Bharat Mata Ki Jai,” “Vande Mataram” and “Jai Hind.” More than 30 youngsters aged between 18 and 21 — carrying dreams of joining the Indian Army — are being trained by Yodha Ravi.

He is imparting the training for free for his leave period of three months and Ravi has been doing this since the last 12 days. His dream is to inspire every Karnataka youth to join the Indian Army. Along with Army training, Ravi is also providing Police force training.

Forty-year-old Yodha Ravi, who is serving in the Army for more than two decades, is a resident of Janathanagar in Mysuru. His father Ramanna (now late) was a KSRTC bus driver. He completed schooling in Sadvidya High School and PUC at Vidyavardhaka PU College. After completing BA from Maharaja’s College, he did his Master’s in History from Karnataka State Open University.His wife M. Suma, two daughters Raksha and Prateeksha stay in Janathanagar. A proud father says Raksha was born on Aug. 15, 2010.

Developing patriotic feelings from a young age, he joined the Army in April 2000 and entered the Military force in September same year. Ravi’s recent posting is in Lucknow, Uttar Pradesh and he is a Havildar (physical trainer, weapon trainer and also drill instructor).

Sharing his views with Star of Mysore on the eve of 75th Independence Day, he said, “I want to make every youth of this country a soldier. The current generation is less patriotic and most of them aspire to work in MNC companies, earning salaries in dollars. It’s rare that we find youngsters showing interest in joining the Army. Celebrating while the Indian team wins any cricket match or a gold medal at the Olympics is not patriotism. Fighting for the country, standing at the borders in adverse conditions is true patriotism.”

Families of martyrs must get respect

The Government and people easily forget family members of martyrs after paying the 21-round gun salute during the last rites. Firstly, the Government should provide employment and free education to the dependants.   Most importantly, the wife and children of martyr soldiers should get equal respect. Also jobs must be given to retired servicemen in educational institutions, he said.

Karnataka’s contribution to the country is immense. Someone needs to push it harder and show it to the world that every Kannadiga is a soldier. Karnataka will become a ‘Sainika Rajya’ one day as more and more youngsters will join the Army, he hoped.

“Bhagat Singh died for the country when he was just 23 and now he is forgotten. There is no single building, stadium or airport named after him while politicians keep their own names to parks and stadiums. India now needs a revolution as there is corruption in every field. We need another revolutionary like Bhagat Singh,” Ravi said.

Over 30 students from different parts of the State are being trained under Ravi. Yuvaraj, a 19-year-old student from Koppal said, “It’s my fifth day in the training camp and I am already feeling like a soldier as the training is vigorous and needs stamina. The training looks simple but as time passes, exercises become gruelling.”

Chandrashekar, a 20-year-old Kalaburagi native said, “My dream is to join the Police force. We enjoy the training sessions every day and we also hear stories from Ravi on his experiences on the Jammu & Kashmir border.”

“We have seen military training in movies and now we are experiencing the hardship of the same. I always wanted to join the military as I am from the district which has given a large number of soldiers to the country,” said 20-year-old Pavan from Kodagu.

Yodha Ravi has been a part of many operations like Surankote Operation in 2005 and Kupwara Operation same year in J&K. 2012-14 Leh Operation in Ladakh and 2018-2020 on the Arunachal Pradesh-Assam Border. Ravi claimed that he has trained about 3,000 students out of which more than 1,000 have been selected for the Army and over 500 to Air Force, Navy and the Police.

Ravi has given free military training for youths in other places like K.R. Nagar, Bengaluru, Uttar Pradesh and Assam also.

The first session in Ravi’s training is from 5 am to 8 am and the second session from 5 pm to 8 pm. Interested candidates can contact Ravi on Mob: 75799-77851 to take part in the  training that will continue till Oct. 30.

Meanwhile, at Maartalli in Chamarajanagar district, a group of retired soldiers is striving to reclaim the village’s distinction of being a ‘Yodhara Grama’ (Soldiers’ Village) as more than 100 soldiers from this tiny village bordering Tamil Nadu are serving the defence forces.

Retired soldiers have opened a training centre to train Army-aspiring youths. They have formed Army Association Trust and it is run with the financial contribution made by retired soldiers and the ones who are serving the Armed Forces. The Trust has taken one acre land near Sulwadi Government Hospital for a lease of Rs. 2 lakh and has been training youths. Five ex-servicemen are providing the training to meet the Army standards.

It may be recalled, Star of Mysore had published a feature article titled ‘For youths of Maartalli in Chamarajanagar serving Nation is serving God’ on May 3, 2021.  The Trust can be contacted on Mob: 95358-70900.

G. Amit Kumar Indian Army M.N. Lakshminarayana Yadav Soldier Yodha Ravi
How the British won India
How To Invest in Bitcoin for The First Time: A Perfect Guide for You