Home » News » I will continue to fight for social justice: Siddu 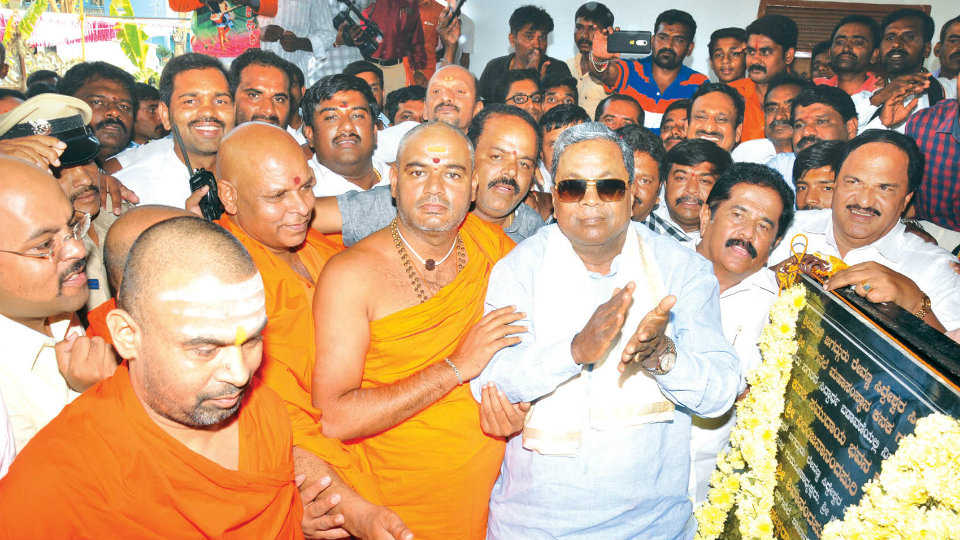 I will continue to fight for social justice: Siddu

Mysuru: Maintaining that he has not bowed to anyone in his decades-long political career, former Chief Minister Siddharamaiah has said that he will never stop fighting against those who oppose social justice.

He was speaking after inaugurating Kanaka Samudaya Bhavan at Siddarthanagar yesterday.

Observing that there is no purpose in life if one loses his self-respect, Siddharamaiah asserted that he is a votary of ‘AHINDA’ and as well as the economically weaker sections of the society.

Noting that those fighting for the cause of social justice and equality should get support from all quarters, he underlined the need for leading a conscientious life.

Pointing out that the caste system gets eradicated if economic and social equality between castes comes to an end, the former CM opined that no community can grow without a political clout.

Stressing on the need to understand facts after getting to know of the surroundings, Siddharamaiah maintained that he played a big role in organising the community.

Recalling the days when he served as the President of Kalidasa Students Union in early 1970s, he said that he used to visit every college then for organising the community students.

Noting that Kaginele Gurupeetha was set up in 1992, he recalled the growth of the Mutt over the years.

Former Minister C.H. Vijayashankar, in his address, said that just as Siddharamaiah is a former Chief Minister, he (Siddu) can also be called as the future Chief Minister.

Alleging that Siddharamaiah was denied his second five-year term by certain vested interests, he recounted the contributions of Siddharamaiah during his five-year rule as the Chief Minister.

Former MLA M.K. Somashekar said that Siddharamaiah had worked for the poor from all communities, without limiting himself to Kuruba community.

Kaginele Kanaka Gurupeetha’s Sri Niranjananandapuri Swamiji, who graced the occasion, said that Siddharamaiah’s large-heartedness has been the cause for the formation of the coalition Government.

Maintaining that Siddharamaiah holds key for the survival of JD(S)-Congress coalition Government, the Seer said that the community was always behind Siddharamaiah.

Lauding the former CM for announcing various welfare schemes for the poor, the Seer opined that although there may be some politicians like Siddharamaiah, there are no personalities like him.

Former Chief Minister has said that the Budget presented by CM Kumaraswamy on Friday was a good one. Speaking to press persons yesterday, Siddharamaiah said that although he was yet to go through the Budget in detail, overall it can be said that it is a good one.