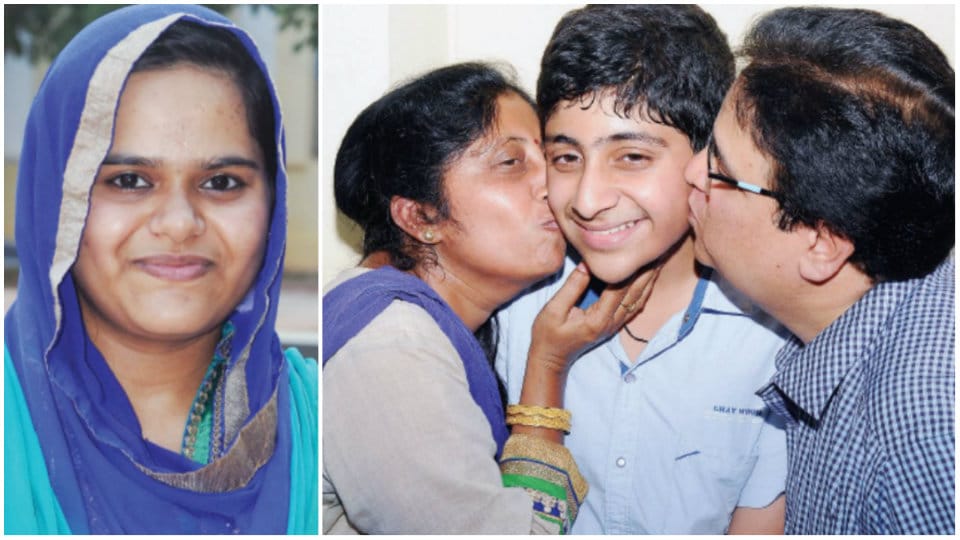 Mysuru: Two students from city figure in the Top-10 list of Second PUC results that were announced in Bengaluru yesterday. Ayesha Miryam of Marimallappa PU College who secured 580 out of 600 marks, has emerged as the fourth topper for the State in the Arts stream. Y.R. Prajwal, a Science student of Vijaya Vittala PU College, stood fourth in the State by securing 593 marks out of 600.

Speaking to Star of Mysore this morning, Ayesha Miryam said that she wanted to become an IAS Officer and she had public service in mind that made her to opt for arts instead of science and commerce streams. “I have scored well and this will make me realise my dreams. I loved arts and was always interested in writing competitive examinations to get through either the IAS or KAS. I had worked hard and expected to be a topper and the results have proved my efforts,” she said thanking her family and teachers for their unflinching support.

Ayesha is the daughter of Zaheer Ahmed Khan and Tahira Begum, residents of Vishveshwaranagar in city. Zaheer is Senior Section Engineer in the Indian Railways. She scored 99 each in history, geography and economics, 95 in political science, 91 in English and 97 in Hindi. “I have not taken tuition even for a single day and I used to study for up to five hours a day,” she said.

Other toppers too attribute their success to hard work and guidance from parents and teachers. Y.R. Prajwal of Vijaya Vittala PU College, who secured 593 out of 600 in Science with computer science as one of the options told SOM that science was his pet subject and he would like to pursue engineering in computer science.

Prajwal has scored 100 each in physics, chemistry and computer science.

“I used to focus on my studies since Day 1. I have cleared JEE Mains and waiting for CET results to get into engineering. My achievement would not have been possible without the guidance and support of my parents and teachers.

Prajwal is the son of Y.R. Raghu and K.R. Mala, residents of Kuvempunagar. Raghu works in the Central Sericulture Research and Training Institute while Mala works for L&T.

H.S. Hamsashree from Marimallappa College is among the topper in Commerce stream with a score of 100 each in statistics, mathematics, business and accountancy (593).

“I want to become a Charted Accountant and I have enrolled for the foundation course. I will finish my graduation too,” he said. “I used to study for about 5 hours a day and there was no pressure from parents. The college too had conducted preparatory examinations five times and that too helped me,” she said. Hamsashree is the daughter of Praveen, a businessman and Anupama who is a housewife.

G.V. Tanushree, also from Marimallappa College has scored 588 marks and 100 each in physics, chemistry, mathematics and electronics while she secured 98 in Sanskrit and 90 in English and is set to enter the Indian Air Force after completing her engineering. Her parents G.C. Vikramraj and K.C. Jyothi live in Periyapatna and Tanushree stayed in a hostel at Saraswathipuram to pursue her studies.

Soubhagya of Marimallappa College has topped the institution in Science stream (589). Her father, who was employed in the KSRTC, expired when she was in primary school nearly seven years ago and the family had to undergo financial difficulties. However, lack of financial security did not discourage Soubhagya and she has secured 100 out of 100 in physics, chemistry, mathematics and biology and secured 94 in Kannada and 95 in English.

“I used to study about six hours a day and also went for tuition but my mother’s and teachers’ encouragement was the other factors besides my hard work,” said Soubhagya. She wants to become an IAS officer after completing  her engineering.

Ananth N. Rao of Vijaya Vittala College has scored 590 out of 600 marks in the science stream and he did not go for any tuitions.

He is the son of S. Narayanarao and V. Lakshmi, residents of Kumbarakoppal. “I used to study with a group of friends and we used to clear all doubts with our teachers,” he told Star of Mysore.