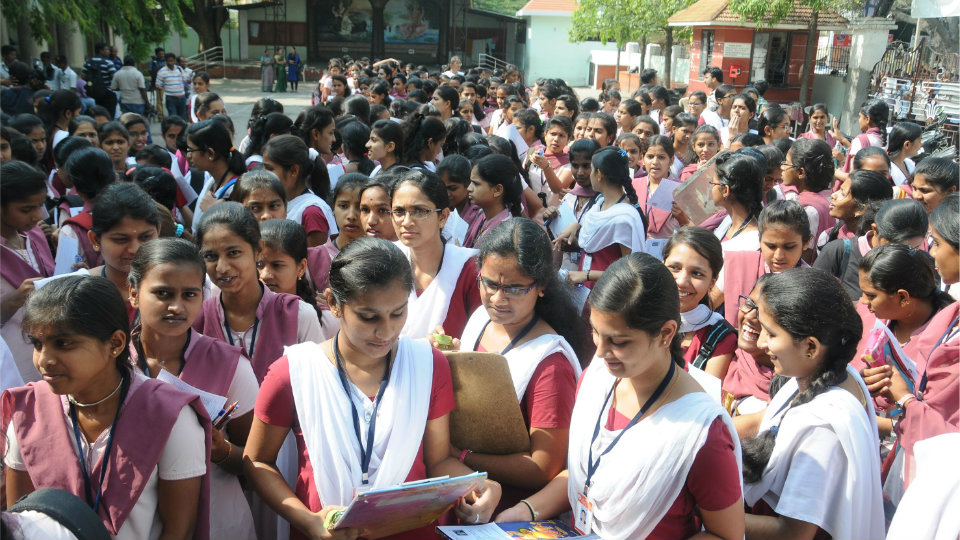 The most eagerly awaited PUC results are out; ending what can perhaps be called the longest and most painful wait of their lives for all the students who appeared for the examination and their parents too. While they bring much cheer to some they also bring much anguish to others. That is why alongside the stories of rejoicing youngsters we see sad reports in our newspapers of many not-so-successful students ending their lives in depression. This is also the time when we see colleges and coaching academies issuing huge and often centrespread advertisements in all newspapers with photos of their students who have excelled.

So the interesting and funny part here is that irrespective of who wins or who loses the race, the time of the PUC results is the time that brings the maximum happiness to all newspaper publishers who become the real winning horses!

A strange thought always used to come to my mind whenever I saw these ads. I used to wonder why many students seem to have such sad expressions on their faces when they have actually given their photos to the managements for insertion in ads that proclaim their outstanding success. I always felt that they should actually be flashing their best smiles in them. This was until a friend who is a college lecturer, told me that these photos are the same photos that the managements collect at the time of admission for issuing identity cards to their students.

Now, because these rather grim faces look so inappropriate in happy announcements I have a suggestion here. Colleges and coaching centres should start collecting two sets of photos — one with the formal look for the identity card and the other with a beaming expression for insertion in the ads in case the students make it to the top rung!

Leaving humour aside, I have some serious issues too that bother my mind. While the PUC College managements claim that it is the excellence of their infrastructure and staff that transformed ordinary mortals into super-human beings, the coaching academies proclaim that it was their focused approach that did the trick. Afraid of being left behind and consequently missing the bus, most students who are serious about achieving their goals enrol themselves at the best colleges and also at the most reputed coaching centres. It is only a handful of students who do well on their own with just what they are taught in their colleges without joining any kind of coaching facility.

Interestingly almost all of them are from rather poor families who can ill afford the high cost at which all extra coaching comes. Very often many students after completing their stint at colleges and coaching centres during the academic term also join ‘Crash-Course’ centres during the holidays to get their final dose of horse power to break the sound barrier, like jet engines! For this they often go to far-flung places and while they used to stay at Paying Guest facilities earlier, many coaching centres now include food and accommodation too in their packages.

For PUC students of the Science stream practically all their holidays are written off for a whole year. Their weekends too are spent cramming for the D-Day because both colleges and coaching centres hold extra day-long weekend sessions. These days we see that even if there is just one PUC student in the family everybody in the family is forced to forgo his or her holiday and all other engagements like weddings and other functions.  Most tuitions and coaching classes necessarily start at very unearthly hours, sometimes at five in the morning and end late in the evening. After that the students have to spend considerable time again at home till late in the night, going through their day’s lessons.

Sleep, the most essential daily break that everyone needs to be in a state of good health takes a back seat. That is why we often see many students dozing on the back seats of their vehicles as their parents ferry them from one class to the other! All this entails a great deal of effort which can be very stressful and taxing. It is certainly not a healthy thing for our youngsters. It makes them cheerless zombies for a whole year which is very cruel if not entirely despicable.

As a doctor I have seen many bright students and their parents being reduced to tears unable to bear the pressure of being in the race. Many students come to me with stress related psycho-somatic symptoms like abdominal pain, nausea, loss of appetite or diarrhoea. Many complain of lack of sleep, forgetfulness and confusion. My other  doctor colleagues too tell me that they too have a flood of such cases during exam times. We cannot treat them with tranquillisers and sedatives because of their young age and also because they need all the alertness at their disposal to do well in their studies.

To end this misery, I have a suggestion which I am putting forth although at the risk of opening a Pandora’s Box. Why should we not make the PUC course an open-study course without the need for enrolment and mandatory attendance at a college? Students who do not wish to take competitive examinations and who just wish to enter degree courses can do so by studying at regular PU colleges. Students desirous of getting their coaching at centres of their choice instead of spending their time, energy and money on two parallel courses can then directly appear for and pass the PUC examination and then take the entrance tests for their respective professional courses. This will reduce fifty percent of their burden.

The cancellation of the dozens of other Medical Entrance Tests after the adoption of NEET has helped students similarly and it is therefore now being extended for admission to engineering courses too. Even if it seems a little too unconventional I think it is time to bring in some much needed reform that can unburden our students for whom the PU is now more of a curse than a course!

3 COMMENTS ON THIS POST To “Unburdening our PUC Students”