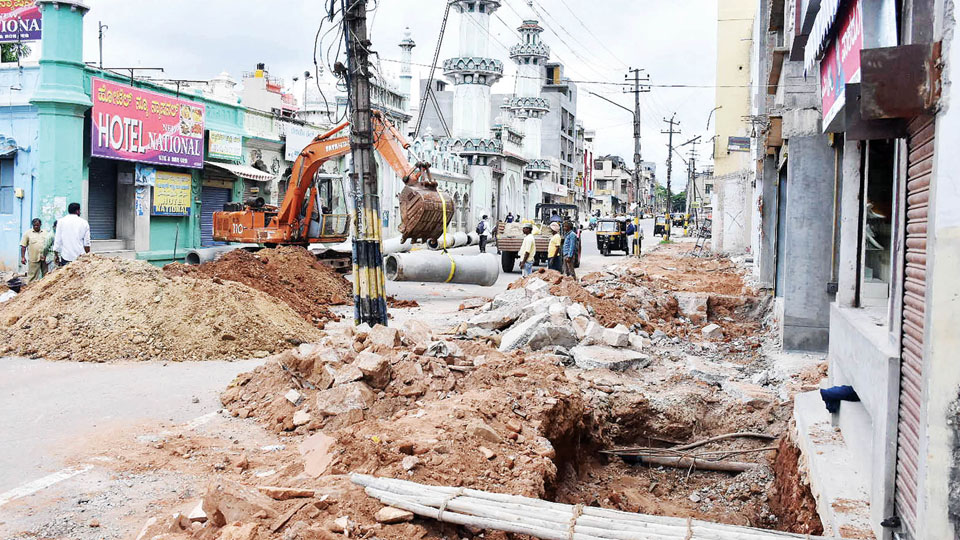 Digging as part of Irwin Road works exposes underground pipes illegally laid to supply water to areas on either side of the road.

Mysore/Mysuru: Leakage and pilferage apart, the Mysuru City Corporation (MCC) has been struggling to regularise unauthorised water connections in city. At almost every MCC Council meeting, the issue of illegal water connection crops up where stringent action is sought against violators but nothing is done on the ground. As such, the illegality has thrived over the years, uninterrupted, burning a hole in MCC’s coffers.

However, such illegal connections are bound to be unearthed one day or the other like it happened while the MCC was undertaking digging work to widen the Irwin Road. During digging, the officials of Vani Vilas Water Works (VVWW) found a vast network of illegal water connections. VVWW is the water supply wing of the MCC and the civic body is undertaking the road widening works in coordination with various agencies.

Many parallel connections and interconnected pipes were discovered and all of them drew water from the main authorised water pipeline. Shockingly, the illegal pipelines have been laid parallel to the main line and they have been buried under earth till now.

This was brought to public purview by Mohammad Fauzulla Mustaffa, Assistant Executive Engineer of VVWW, at the virtual talk-cum-interaction on ‘Recent trends in water supply management by VVWW in Mysuru’ organised by Mysore Grahakara Parishat (MGP) on Dec.13.

The Engineer revealed that there was a vast network of illegal connections in the city centre. “We were baffled to discover parallel lines next to our legal supply network. Three to four lines were discovered and those had many supply links and when they were mapped, they were not found in the water supply maps of VVWW. The water, however, was drawn from the legal line. We do not know when the illegal network was laid and under whose supervision the work was done,” he told the participating citizens.

On discovery of the illegal network, the VVWW acted swiftly and removed the pipes that supplied water. “We have blocked water supply now and clearing the area of all illegal lines besides undertaking systematic works. We are on the watch for any illegal connections and will fix tamper-proof meters,” he said.

MGP members insisted that VVWW must form Vigilance Squads to independently check existence of any illegal connections and bring to light all such cases for legal action and penalties.

To a question on how water bill dues are recovered from rural areas surrounding Mysuru, Fauzulla Mustaffa said that as water to such areas was being supplied in bulk, unlike the slab rates of Mysuru city, Gram Panchayats are charged less and despite this, more than Rs. 35 crore is yet to be realised from them. The matter is under discussion in the Council, he informed.

One of the MGP members pointed out that in apartments and complexes where water is being supplied from local borewells within their premises, no bill is charged for utilising Underground Drainage (UGD) facility though they are connected to the main UGD line. This results in large loss of income to the MCC.

Responding to other questions, VVWW Asst. Executive Engineer Fauzulla Mustaffa said that development works are being carried out under Atal Mission for Rejuvenation and Urban Transformation Scheme at Melapura, Hongalli, Belagola and Kabini at Bidaragudu pump houses. “The works include enhancement of existing pump houses to a higher capacity and erect water treatment plants. The projects which were delayed due to COVID-19 is expected to be completed by next year which would enable water supply for at least two hours a day throughout the city,” he added.

Drinking water supply is a 120-year-old system in city and many pipelines may have been laid all these years to supply water. In the process, some of them may be illegal too like we found on Irwin Road. We have disconnected water supply anticipating residents to come forward to get re-connections. But no one has come forward yet.

As per an estimate, there are over 12,000 to 15,000 illegal water connections and steps are being taken to regularise them. Two squads — Cauvery and Kapila — are visiting houses and installing water meters. On an average, over a dozen illegal tap connections are regularised daily. In case of economically weaker sections, the meters are installed free of cost and are regularised on the spot. This process will pick up once we receive the next consignment of water meters. We are planning to complete the regularisation drive in the next 6-8 months.”— Mohammad Fauzulla Mustaffa, AEE, VVWW

6 COMMENTS ON THIS POST To “Illegal water pipes discovered”