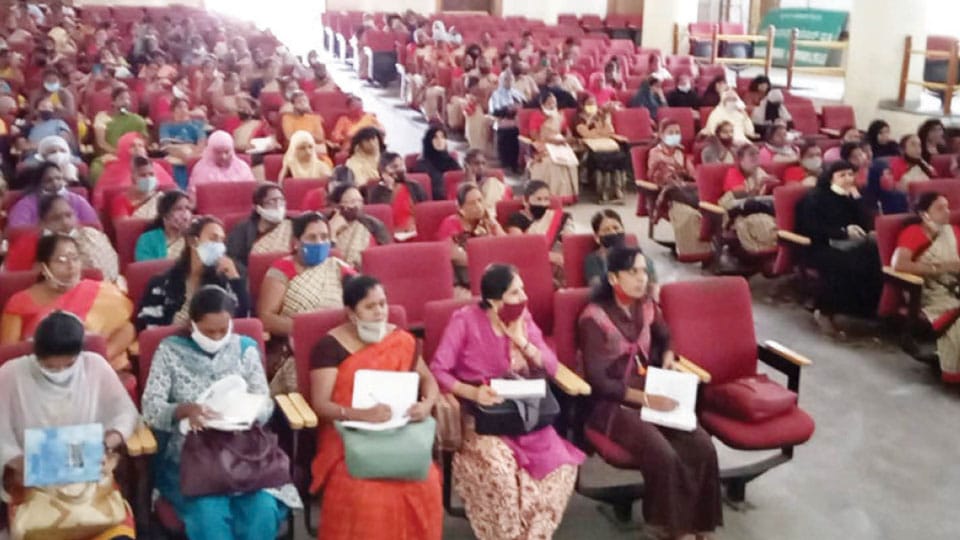 MCC to launch household survey of school dropouts from tomorrow

Mysore/Mysuru: With the Government directing all Urban Local Bodies (ULBs)of the State to carry out a survey of school dropouts in their limits, the Mysuru City Corporation (MCC) will be launching an House to House survey in the city from tomorrow (Dec. 23), in association with the Department of Public Instruction.

Ahead of the launch of the survey, the MCC had organised a training workshop for Anganwadi workers at the Town Hall yesterday.

Addressing the workshop, DDPI Dr. Panduranga said that earlier, the Department of Public Instruction alone used to conduct such a survey. However, the survey could not attain the desired results in total and now, with the participation of MCC, it is expected that the survey to identify school dropouts and bring them back to schools, will be a total success.

Noting that the Public Instruction Department usually used to carry out the survey during night time in December as residents of households used to go for work during the day, he said that 56 school dropout children were identified in the district, including 20 in Mysuru city alone last year. Following the survey, the Department ran tent schools for these children. However, the academic activities in these schools were discontinued following the outbreak of the deadly COVID-19 pandemic in March this year, the DDPI said.

The survey will be carried out with the help of a mobile app ‘Karnataka H2H Children Survey’ app developed by the Centre for e-Governance of Government of Karnataka. The survey, that is aimed at collecting data of children aged between 6 and 14 years, who have dropped out of schools, will go on till Feb. 14, 2021. The data so collected  in Mysuru will be collated and posted on the MCC website.

The survey is being held following an order from the Karnataka High Court and the subsequent direction of the State Government. The survey, which was earlier planned from May 1 to 31, had to be postponed following the COVID-19 crisis.