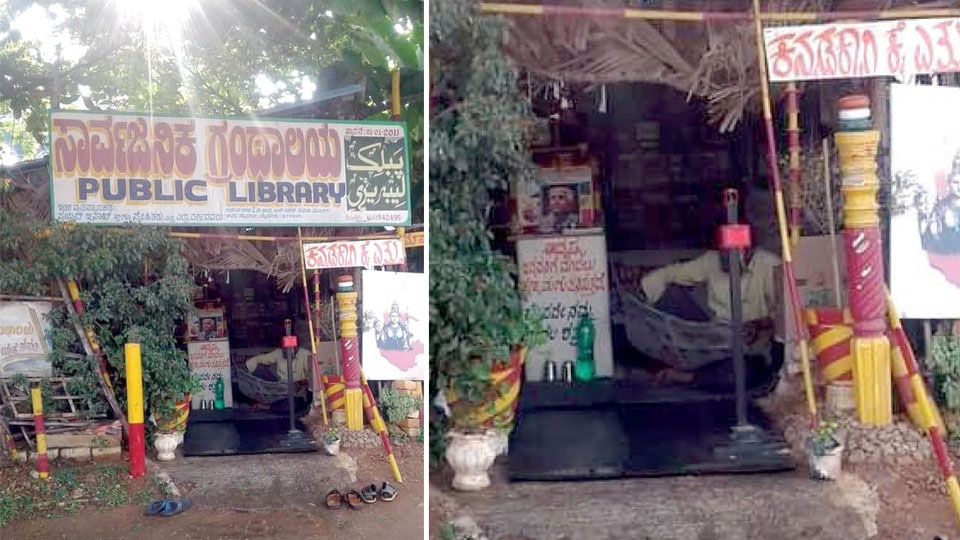 Mysore/Mysuru: A group of citizen activists have written to Mysuru City Corporation (MCC) Commissioner Shilpa Nag questioning how did authorities allow encroachment of a public land — belonging to Mysuru Urban Development Authority (MUDA) — to set up a Library. The letter comes a fortnight after the library that was set up by Syed Isak in Rajivnagar was destroyed in a fire.

Till now, nobody has raised the ‘inconvenient’ question while there were many reports in the media on how the library was mindlessly torched, they said. “When we first read his story in the media, our initial reaction was how the officials allowed an encroachment on public land,” the letter signed by Bhamy Shenoy, C.R. Aswathanarayan, Shoba Sambasivan, Venkatesh Kharidi, Roy Joseph, Nanjapur Yaduraju and Usha Yaduraju said.

The activists, who have written the letter to MCC Commissioner,  have marked a copy to MUDA Commissioner Dr. D.B. Natesh. A copy of the letter has also been sent to Star of Mysore where the activists have regretted the failure of the officials to take action when Syed Isak started a library on a Civic Amenities (CA) site belonging    to MUDA.

No doubts about noble deed

“There is absolutely no question about Syed Isak’s noble goal of giving easy access to books and newspapers to readers in Rajivnagar. This is most admirable. But it is most unfortunate that nobody has raised the ‘inconvenient’ question of encroachment so far,” the letter stated.

“As we learnt more — like an illiterate starting a library, tiny shed having 11,000 books, spending Rs. 8,000 per month to support the library despite his limited wage earnings, support for promoting Kannada books, having hundreds of books like Bhagavad Gita, Bible and Quran, etc., our emotions took over. Some of us even wrote a letter suggesting that we need to raise funds (we were not aware of the crowd-funding then) to help him”, the letter said.

“However, this episode has taken a different turn with politicians, Ministers, officials coming forward to compete with one another to get involved. Even at the risk of being misunderstood, some of us who have taken principled stands against various encroachments in the past want to raise a fundamental question,” the letter stated.

Activists referred to their earlier campaigns against encroachment or violation of law during the construction of a building in Cheluvamba Park, a library in People’s Park, besides other residential buildings or shops.

“During the long years since 2011 when Syed Isak started the library in a CA site belonging to MUDA, why did the officials fail to take action? Even now when we all know that Syed Isak has violated the rule of law, what is the right thing to do? Just ignore the illegality as we seem to be doing,” the letter asked. “If someone robs a bank to steal money to help a cancer patient to pay for the medical charges (really a noble motive), should the society forgive his illegal act and admire his noble motive,” the letter questioned.

“Today in our city, where the violation of law is rampant everywhere -— thousands of traffic violators endangering the lives of others, adulterated food and sweets sold in the market, pesticide-sprayed vegetables sold to unsuspecting consumers, more than 90 percent of buildings violating bylaws, mis-allocation and misuse of CA sites, unnecessary delay in providing Government services to force payment of bribe, etc. — should we just forget the encroachment even when done with the noble motive,” they asked.

The activists further state in the letter to the MCC Commissioner, “We do appreciate the delicate position you are in. But we wanted to bring this to your attention. We are simply interested to promote the rule of law in Mysuru.” The activists clarified that they were not opposed to the construction of a permanent library building at the spot in Rajivnagar after due allocation of land for the purpose.