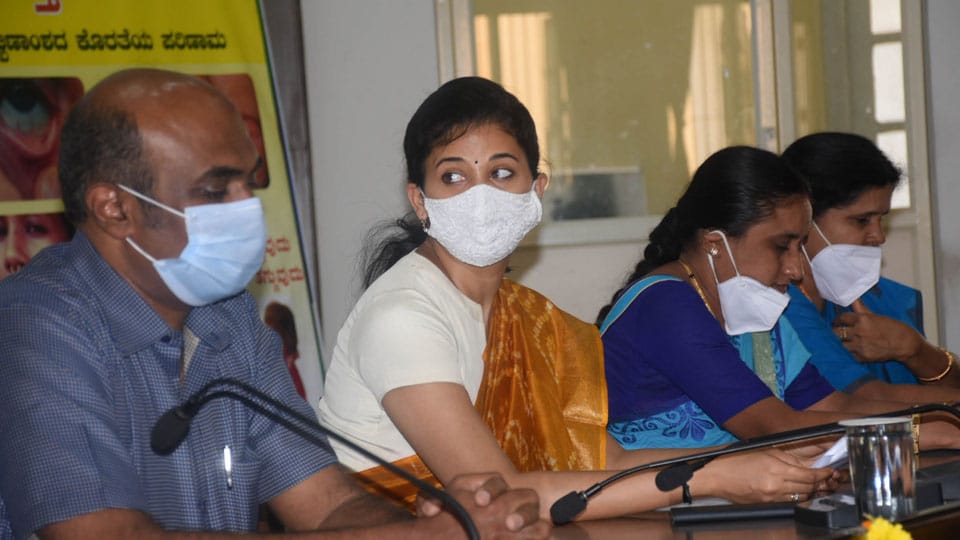 Mysore/Mysuru: The sudden increase in Corona positive cases was due to ramping up of RT-PCR test and not because of COVID-19 situation going out of control in the district, said Deputy Commissioner (DC) Rohini Sindhuri.

Talking to reporters on the sidelines of a function this morning, she said it was true that the district was recording 100-plus positive cases daily in the last one week. Hitherto, around 3,500 RT-PCR tests were conducted and now it has been jacked up to nearly 6,000 cases. Naturally, more positive cases were coming to light. The Corona Positive rate was around 1.3 percent to 1.4 percent and it was less than the State average. Even Death Rate has been very much under control, she said.

The DC said that tracing of primary and secondary contacts has been stepped up in the district and those who tested positive have been isolated. As compared to October 2020 situation, there was no shortage of oxygenated beds as 150 beds were available in District Hospital on KRS Road. Even Mandakalli Corona Care Centre will be re-opened from tomorrow where around 650 beds were available to treat patients with mild symptoms. Around 50 oxygenated beds in each Taluk General Hospital were reserved for COVID patients. “It is wrong to note that positive cases are coming from rural areas. Of the 100 positive cases, 80 cases belonged to city and the rest to rural areas,” she added.

Rohini said that declaring any area as Coronavirus cluster was very difficult as the cases were coming from different places. Last year, they had more number of cases from a factory in Nanjangud which necessitated to declaring it as Corona cluster. The State Government has implemented strict guidelines in the interest of public safety but they were not followed by citizens. People have stopped wearing mask and maintaining social distance. Already, they have suffered a lot last year. It was unfortunate that citizens expect Police personnel to create awareness on face mask and social distancing.

On jathras, public festivals and shandies, the DC said that the State Government has already issued guidelines banning congregation of more than 500 persons. But, it was left to the discretion of Tahsildars to take a call on banning festivals which will attract more people.

All students are safe

District Health Officer (DHO) Dr. T. Amarnath said that students of K.R. Nagar Morarji Desai School, Bannur School and another two schools in Mysuru city, who tested positive, were out of danger. In fact, 99 percent of the kids were not required hospitalisation. They have been isolated for two weeks. Contact tracing of parents, teachers and others have been done and subjected them to undergo RT-PCR test. All of them tested negative.

He said vaccination of people above 45 years of age will begin in all vaccination centres in the district from tomorrow.  Already, around one lakh senior citizens of the total 2.79 lakh, have been vaccinated.

ONE COMMENT ON THIS POST To “Increase in Corona positive cases due to record RT-PCR testing: DC”