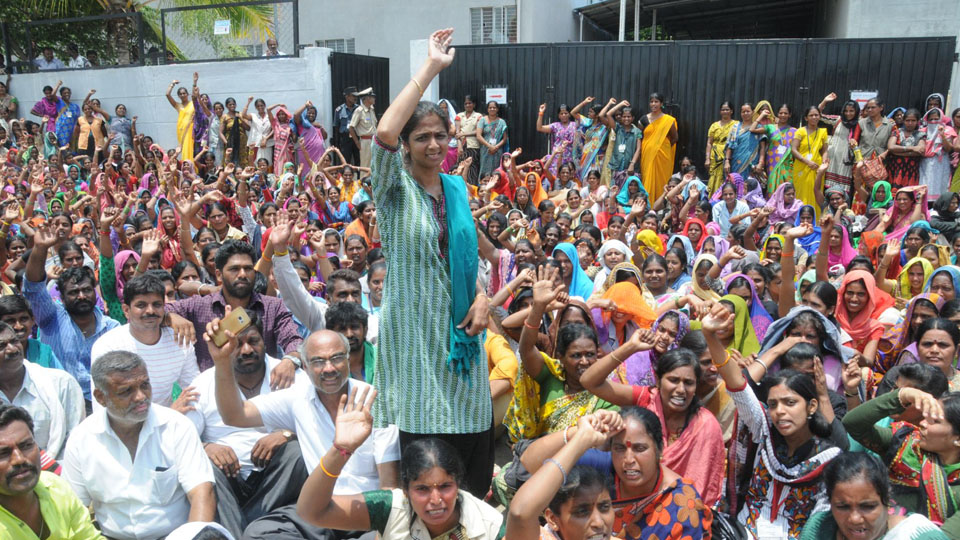 Over 1,000 employees of the garment industry, mostly women, are on strike seeking a hike in wages and regular social benefits.

The employees alleged that the management had offered a meagre rise of Rs. 12 per day in basic wages as against a demand of Rs. 50. They complained that employees who had resigned were not paid the final settlement amount.

The employees said that they were not eligible for gratuity. They contended that unreasonable targets were fixed daily for the employees and were being unnecessarily harassed. Added, there were no incentives. They also complained of a bad treatment by supervisors. They further alleged that the management was forcing them to work even on Sundays (weekly off).

The employees expressed a determination to continue the stir till their legitimate and fair demands were met by the management.

Smitha Puttannaiah (daughter of late MLA K.S. Puttannaiah) of Pandavapura Raitha Sangha who is supporting the striking employees said that the management should compulsorily pay the minimum wages as per Industries Act and added that the Sangha was fully supporting the employees Former ZP President Koorgalli Mahadeva, ZP Member Arun Kumar, GP Member Shivakumar, Sangha members Girish, Abhilash and others were present in support of the striking employees.