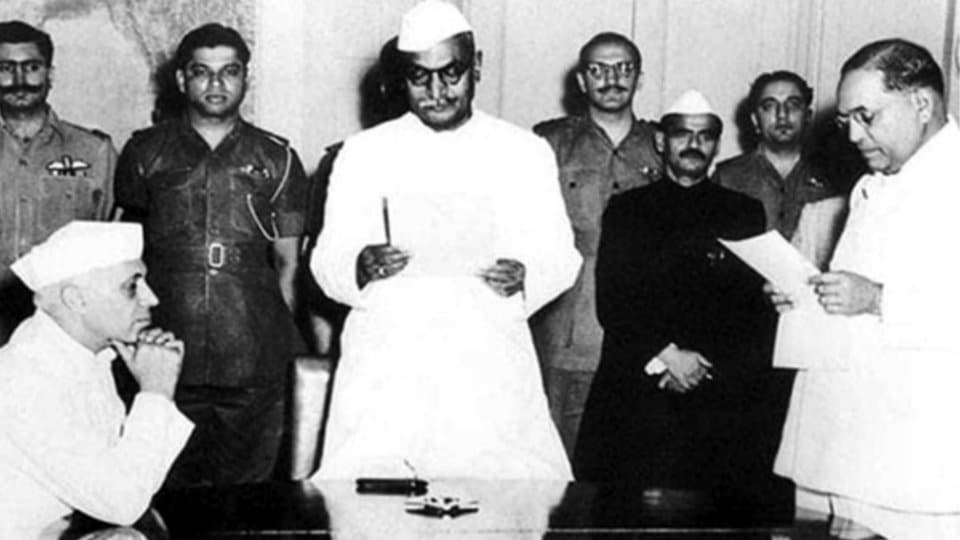 India gained Independence on 15th August 1947 but technically it was not yet a fully free nation. The newly-independent country had a dominion status and  King George VI of Britain was its nominal head. The process of giving it a Constitution and making India a Republic had started even before the day of Independence and culminated on 26th November 1949 when the Constituent Assembly adopted the Constitution of India. By this time three people had emerged as tall and revered leaders of the Nation. Prime Minister Jawaharlal Nehru had governed wisely in a democratic way, contributed immensely to the framing of the Constitution and was extremely popular with the Indian masses.

An equally popular and beloved leader was the Deputy Prime Minister and the Home Minister Sardar Vallabhbhai Patel and he had a big hold on the members of the Congress party which was far more than that of Nehru. As the first Home Minister and Deputy Prime Minister of India, Patel organised relief efforts for refugees fleeing to India from Pakistan and worked to restore peace. He led the task of forging a United India, successfully integrating into the newly-independent Nation approximately 565 self-governing Princely States. His commitment to National Integration in the newly-independent India earned him the sobriquet “Iron Man of India.” He has also earned the name as the “patron saint of India’s civil servants” for having established the modern all-India services system. Unfortunately, he died in December 1950.

By the time the Constitution was adopted, a third equally  popular leader had arrived on the national scene and that person was Dr. Rajendra Prasad. An advocate from Patna, Dr. Prasad had sacrificed a lucrative practice at Calcutta and Patna High Courts, for the freedom struggle with the Mahatma and had spent many years in jail. With his pleasant countenance, patience and deft handling of the Constituent Assembly as its President, he had won the admiration of the Congress party and the Indian public. He was called “Ajatha Shatru” for he had no enemies.

Dr. Bhimrao Ramji Ambedkar was the first Law Minister of Independent India. Probably he is the highest qualified Law Minister or for that matter, the highest qualified Central Minister in Indian history. He had a Doctorate in Economics from Columbia University, New York, a second Doctorate from the London School of Economics and then studied Law and qualified as a barrister from London. He was known for his work for the cause of dalits, labour and the cause of women and for his erudition and the books he authored. Maternity Benefit Bill was introduced by Dr. B.R. Ambedkar in 1942 during his tenure as Labour Minister in Governor General’s Executive Council. But he earned great renown when, as the Chairman of the Drafting Committee, he got the Indian Constitution approved unanimously by the Constituent Assembly and earned the title “Father of the Indian Constitution.”

As the Law Minister, he vehemently opposed putting Article 370 in the Indian Constitution and the granting of special status to Jammu & Kashmir. He did not even participate in the discussion on Article 370. Dr. Ambedkar was determined about the Hindu Code Bill. It was believed that Nehru and Ambedkar argued about the matter quite often, anger among them was not just about the Bill. Dr. Ambedkar came from London and New York with Ph.Ds in Economics and wanted a major role in issues related to the country’s economic planning but Nehru was against his inclusion in India’s economic planning. Nehru favoured a Soviet style Socialism with Central Planning, but Ambedkar views were different. Dr. Ambedkar was also against Nehru’s foreign policies. He resigned from Nehru’s Cabinet in October 1951 and started preparations for the Lok Sabha elections by creating a separate party of his own. His resignation speech to the Parliament is thought-provoking and relevant even today.

READ ALSO  Modern South India: Past and modern story of South India and of Southern Culture

All these and the other Founding Fathers had differing visions for the future of this new Nation. One of the major reasons for the political differences between Dr. Rajendra Prasad and Pandit Jawaharlal Nehru was the attitude of both of them towards the significance of religion in the society. Nehru had been highly influenced by planning and progress of Soviet Russia after the revolution of 1914. He favoured modern Socialism and believed that attitude towards religion was the main reason for India’s poverty and backwardness. According to him, after Independence, India had to move forward with a Secular outlook and the country needed large industries, planned cities, hospitals, schools and laboratories over places of worship. Rajendra Prasad also favoured progress, but not at the cost of core Indian culture and people’s beliefs. He was very religious. Vallabhbhai Patel’s thoughts were somewhere between these two approaches.

The major public confrontations between Nehru and Prasad started with the Hindu Code Bills. Dr. Ambedkar presented the draft in October 1947 in the Constituent Assembly and Nehru supported him. They wanted this Bill to be part of the Constitution. Under this, a rule code for all Hindus was to be created. As the President of the Constituent Assembly, Dr. Rajendra Prasad intervened. He suggested that such rules should only be created after taking to account the opinion of masses. He argued that the traditions are prevalent in many forms, hence, to make the Code Bills successful people must approve it. He was also of the opinion that such a code should apply to all sections of society and not merely the Hindus.

The debate on the Code Bill spread all over the country and conservative religious leaders opposed it vigorously. Nehru noticed the controversy surrounding the Bill and at the time when Constitution was to be filled with the Hindu Code Bill, he took a tough stand.  Furious with Nehru’s attitude, Rajendra Prasad wrote a letter to him. In the letter, he described Nehru as unjust and undemocratic. Prasad shared the letter with Sardar Patel before sending it to Nehru. Patel read the letter and suggested him not to act angrily and withhold the letter.  He advised him to raise his disagreement in party’s forum. Rajendra Prasad was unhappy with this advice of Patel, but followed it and kept back the letter. Patel was a shrewd politician and had his own plans. Finally Nehru could not get the Bill included in the Constitution.

It was already September 1949. The Constitution was being completed and the Presidential elections had to be held soon after that. Patel wanted  Prasad to be the President. Nehru, at that time, favoured the then Governor General Rajagopalachari to be the first President of India. Chakravarthi Rajagopalachari had not participated in the Quit India Movement and hence was not popular with the Congress party members. Patel and Prasad had a stronghold on the organisation, even more than Nehru. But Patel did not want any direct confrontation with Nehru. After all, Nehru was the face of Congress and the most popular leader among the people. But Patel’s strategy was successful and the Congress party chose Rajendra Prasad as the President of India. On January 26, 1950, at 10.24 am, Rajendra Prasad created history by becoming the first President of the new Republic. The Constituent Assembly started working soon after the completion of the Constitution as a Legislative body till the general elections of 1952. During 1950-52, before the general elections, the debate on Hindu Code Bills was still continuously going on.