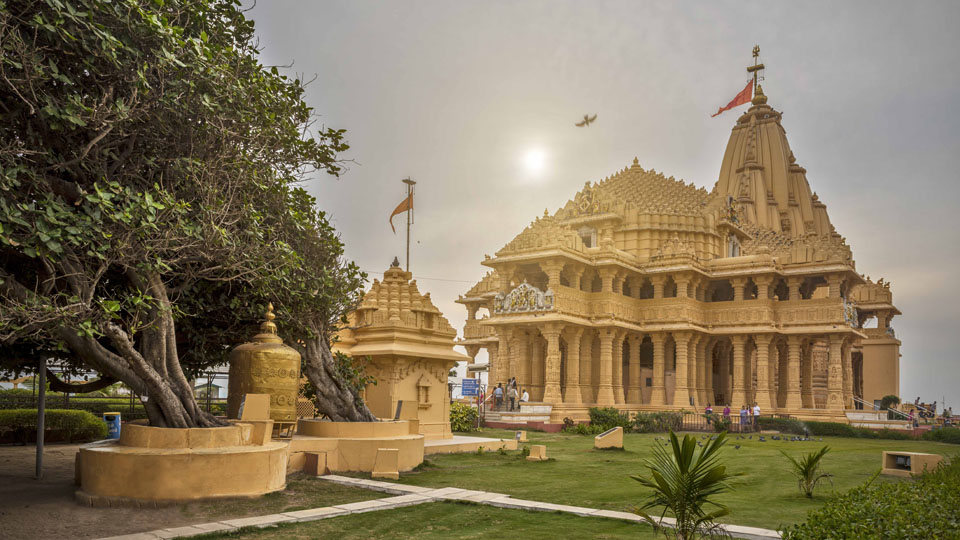 The famous Somnath temple was in Junagadh State (or Junagarh, a Princely State in Gujarat) before Independence and was known for its splendour and wealth. It was first plundered and destroyed by Gazni Mahamood in 1025 and subsequently by many more foreign invaders. After India’s Independence and the accession of Junagarh State into Indian Union, Sardar Vallabhbhai Patel, the then Union Home Minister, pledged that Somnath should be reconstructed and restored to its original glory. When Patel broached this subject with Mahatma Gandhi, Gandhiji endorsed the plan but said that the contribution for the reconstruction of the temple should come from the public. Patel accepted this advice. With the demise of Patel, the task of the restoration of the temple was ably led by K.M. Munshi, a Cabinet Minister in the then Prime Minister Nehru’s Government.

Nehru never liked the idea of restoring this ancient monument and more than once criticised Munshi for its reconstruction. At the end of a Cabinet meeting, Nehru called Munshi and said: I don’t like your trying to restore Somnath. It is Hindu revivalism. Munshi did not utter a word but later wrote to Nehru a long letter saying, “… It is my faith in the past which has given me the strength to work in the present and to look forward to our future. I cannot value freedom if it deprives us of the Bhagavad Gita or uproots our millions from the faith with which they look upon our temples and thereby destroys the texture of our lives… this shrine once restored to a place of importance in our life will give to our people a purer conception of religion and a more vivid consciousness of our strength.”

When the then President of India, Dr. Rajendra Prasad, was invited to inaugurate the temple, Nehru advised the President “against participating in a significant function which unfortunately has a number of implications.” Rajendra Prasad ignored Nehru’s advice and added, “I would do the same with a mosque or a church if I were invited.” So, on 11th May 1951, Rajendra Prasad, while presiding over the opening ceremony of the temple, gave a stirring speech. He said that “the physical symbols of our civilisation maybe destroyed, but no arms, army or king could destroy the bond that the people had with their culture and faith. Till that bond remained, the civilisation would survive. He added that it was the creative urge for civilisational renewal, nurtured in the hearts of the people through centuries that had once again led to the “praan-pratishta” of the Somnath deity. Somnath was the symbol of economic and spiritual prosperity of ancient India, he said. The re-building of Somnath will not be complete till India attains the prosperity of the yesteryear.”

The First General Elections and The Presidential Election 1952

The first general elections were held in 1952 and was the first major milestone for the infant Republic. While the world watched sceptically, Indian elections with the universal franchise and the biggest electorate in the world went on peacefully and a democratically elected Government was installed in New Delhi. Congress got a spectacular majority under Nehru’s leadership. Nehru had emerged as the undisputed supreme leader of India. After the general elections, new election for election of President was to be held.

Against the wishes of Nehru, the Congress party nominated Rajendra Prasad again for the President. The other parties supported Professor K.T. Shah as they believed that a politically neutral person should occupy the post. Professor Shah was associated with the labour organisations. He had completed his studies at the London School of Economics. Professor Shah was also a member of the First Planning Commission, made under the leadership of Nehru in 1938. In the 1952 elections, the Congress got 364 out of 489 seats. Being a Congress candidate was the only condition to become President of India. Rajendra Prasad got 5,07,400 votes in this election, whereas Shah got only 92,827 votes. An interesting aspect of this election was that 65 MPs and 479 MLAs of Congress did not cast their votes. It was later stated that since Rajendra Prasad’s victory was certain, many people did not bother to vote. Nehru in full control of the Congress party after the 1952 elections to Parliament, easily got the Hindu Code Bills passed and President Prasad, as a true democrat, signed those Bills without any protest.

While he accepted the party’s will in 1952, in the elections of 1957, Nehru had the opportunity to elect the President of his own choice. So, this time, his favourite was the first Vice-President Dr. Sarvepalli Radhakrishnan — who was a philosopher, sanskrit scholar, prolific writer, former professor of east west philosophy in Oxford and a former ambassador to Soviet Union. To the utter disappointment of Nehru, the choice of the Congress party was Rajendra Prasad once again and he was easily elected. Dr. Radhakrishnan was upset and wanted to resign. Nehru changed the order of precedence to placate Radhakrishnan. Previously the order was President, Prime Minister and the Vice-President. He made the Vice-President second, demoting himself to the third position. Dr. Prasad is the only President in Indian history to have occupied Rashtrapati Bhavan for twelve long years.

The procedure for awarding the Bharat Ratna has been straightforward: The Prime Minister recommends the names to the President of India, who then accepts such nominations. The process under which the Prime Minister or the Cabinet nominates names to the President to confer the Bharat Ratna is a convention and not the law of the land. On July 13, 1955, Nehru had returned from a successful tour of European countries and the Soviet Union, a tour aimed at the promotion of peace as the Cold War was rapidly escalating. Nehru’s efforts to establish India as a major player in world affairs found popular support outside India. On Nehru’s return to Delhi, the then President of India, Rajendra Prasad, went to the airport to receive him, disregarding protocol. He also hosted a special State Banquet on July 15, 1955, at Rashtrapati Bhavan in honour of Nehru. It was at this event that Prasad announced his intention of conferring the Bharat Ratna on Nehru. Prasad described Nehru as the ‘great architect of peace in our time.’ The President himself confessed that he had acted unconstitutionally as he had decided to confer the honour “without any recommendation or advice from my Prime Minister” or the Cabinet.

Contrary to the popular myth, Patel and Nehru were not rivals. Though they disagreed on many issues, they acted as partners in laying the administrative foundations of the infant Republic. Similarly, Rajendra Prasad and Nehru, in spite of strong differences, admired and respected each other. President Prasad was a true Gandhian and believed in simple living. The official salary of the President was Rs. 10,000 per month. But he drew only Rs. 5,000 per month. After he left office in 1962, he did not stay in Delhi, but went to live in Sadaqat Ashram in Patna. He donated all the jewels of his wife to National Defence Fund at the time of war with China. India’s highest honour Bharat Ratna was conferred on him in 1962. He died on 28th February 1963.

When India attained freedom in 1947, most of the world leaders and western press were pessimistic of its future. They had felt that this multi-ethnic, multi-lingual and multi-religious vast country would break up in ten years. In the first two decades, the young nation faced many challenges like the integration of 565 Princely States, Police action in Hyderabad, Tribal and Pakistani invasion of Kashmir, Chinese war of 1962 and the 1965 war with Pakistan. Time and destiny have proved our detractors wrong. From being one of the poorest countries of the world in 1947, we have progressed to become the world’s fifth biggest economy in 73 years. Our Founding Fathers gave us a good Constitution, rule of Law, established Democratic institutions, facilitated a Free Press and allowed an independent Judiciary to function and gave us a vibrant democratic Republic.

On this 71st anniversary of the establishment of The Republic of India, let us bow our heads and pay our tributes to all our Founding Fathers who laid the strong foundations of modern India and pray (borrowing the words of Abraham Lincoln) “that this Nation, under God, and that Government of the people, by the people, for the people, shall not perish from the earth.”

10 COMMENTS ON THIS POST To “India becomes a Republic: Somnath Temple in Gujarat, The First General Elections, Bharat Ratna to Nehru”