Home » Sports » India wins Down Under 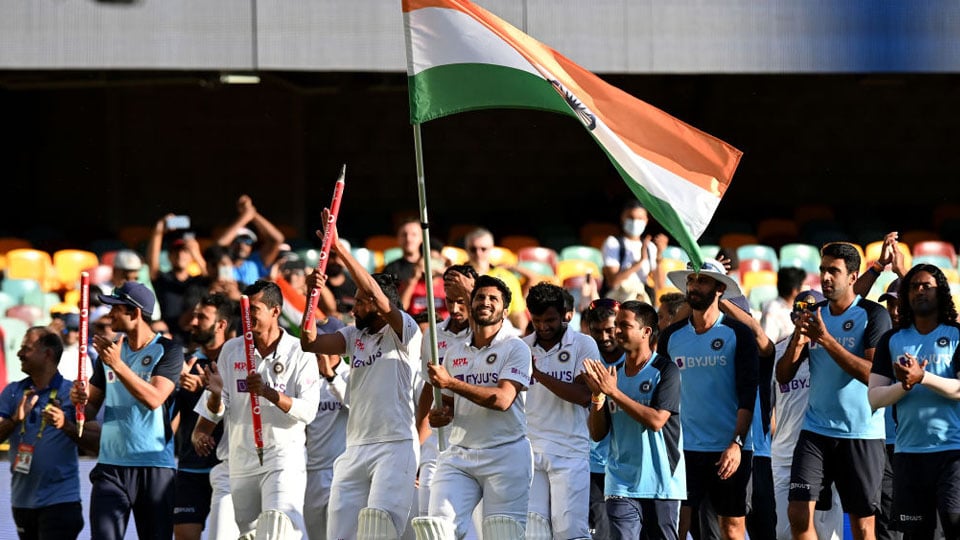 India wins Down Under

After an embarrassing first Test defeat by crashing to just 36 runs all-out, team India today created history by not only winning the fourth Test match but also becoming the only team to beat Australia at the Gabba in 32 years. With this, India also marked its third highest successful run chase in Test cricket. An inexperienced Indian team chased down the target of 328 to script history on the fifth and final day of the fourth and last Test against Australia at the Gabba.

India thus won the away series 2-1 with third Test ending in draw.

Injury-hit India team rose from the ashes to hold on to Border-Gavaskar Trophy in one of the greatest Test victories.

India, which began the day at 4 for no loss, needing 324 more to win on the final day, did it in grace by scoring 329 for 7, thus achieving a remarkable feat against the host nation.

Although India lost experienced Rohith Sharma cheaply, a counter-attack from new-comer Shubman Gill (91), who along with Cheteshwar Pujara, featured in a 114-run partnership for the second wicket which proved crucial for India’s victory. After Gill fell, Pujara was joined by captain Ajinkya Rahane who together took the score to 167 before Rahane fell for 24.

The hard-hitting Rishabh Pant (89*) was promoted to Number 5 as India looked to go for the win in the afternoon session. At Tea, India were 183/3, still needing 145 to win in the final session. Pujara, after weathering numerous blows to the body, was given out LBW on umpire’s call for 56.

Pant carried on India’s charge towards a historic win in the last hour of the Test, hitting the winning runs with minutes remaining before close of play. Australia had not lost a Test at the Gabba in 32 years before this.

For Australia, pacer Pat Cummins was the most successful bowler with 4 wickets while Nathan Lyon took 2 wickets.

Rishabh Pant, who remained unbeaten on 89 and took India to the victory lap, today became the fastest Indian wicket-keeper batsman to score 1,000 Test runs. Pant got to the milestone in his 27th inning thereby breaking former India captain M.S. Dhoni’s record of 32 innings.