Home » Columns » Indira: The Evil and The Good 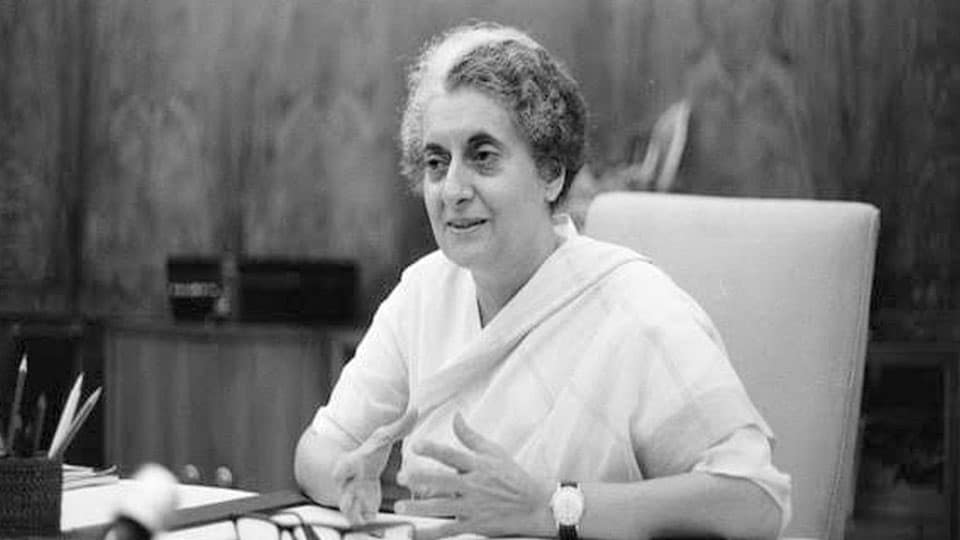 Indira: The Evil and The Good

I spent an hour with Indira Gandhi last week. She was at her photogenic best, looking confident, well-groomed, attractive. She kept a camera-conscious smile all the time, though there were moments when uncomfortable questions were thrown at her and she had to make an effort to look composed. It was a 1978 television interview with the BBC’s Jonathan Dimbleby — a year after the infamous Emergency during which she and her son Sanjay Gandhi brought India under their dictatorship.

It was clear that Indira agreed to the interview because of the magical aura of the  Dimbleby name. The present generation may be unaware of what that surname meant. During the Indira years, the BBC had more influence in India than it has today and no BBC name was more awe-inspiring than Dimbleby. For three generations that name had dominated the glamour associated with the BBC. Richard Dimbleby, who ran a programme called ‘Panorama’ had the popularity of a film star and the status of a political messiah. He pioneered the television interview style that combined politeness with toughness. His sons David  Dimbleby and Jonathan Dimbleby continued that tradition with great competence. David’s son Henry Dimbleby took it to the next generation. A remarkable family record.

The Indira interview by Jonathan Dimbleby was notable for the thoroughness of the homework he had done and for the manner in which Indira defended herself. He brought out the ruthlessness of her two-year Emergency,  from imprisonment of political opponents to the scandalous sterilisation programme supervised by Sanjay Gandhi. Young and old were lined up to be surgically rendered incapable of reproduction. It was Sanjay Gandhi’s idea of solving India’s population problem.

In the Dimbleby interview, Indira justified everything she did. There wasn’t even a hint that perhaps this or that could have been done in a different way. The premise on which things were justified was, as she explained, opponents were committed to the policy of “if we cannot win by the ballet, we shall win by the bullet.” If she had not taken a firm stand against such desperate opponents, she said, “India would not have survived.”

That is the kind of self-serving justification all autocrats find for their abuse of democracy. It is a pity that a shrewed political tactician like Indira did not understand that people’s  feelings  were hurt by her  Emergency rule. In the 1977 election that followed the Emergency, the Congress party lost control of India for the first time since independence. It is a different matter that the hastily  concocted Janata Party alliance fell by the wayside with Morarji Desai’s eccentricities and Chandrasekhar’s personal ambitions turning the whole thing into a circus.

Indira did have a strong democratic instinct within her. May be the Nehru family tradition had something to do with it although it is fashionable these days to dismiss Nehru as an inconsequential figure. It must be that inherited instinct that led her to announce a general election when she could have just as well continued with the convenient Emergency. Clearly she wanted the stamp of  popular  approval for her rule. It must have been a surprise to her that people declined to  act as rubberstamps.

Perhaps the best example of Indira taking the public for granted was her claim that pre-censorship was abandoned because the press began self-censorship. It was an enforced self-censorship.  No report on Tihar Jail was permitted.  Can we imagine the press doing it on its own?  Film star Nargis was arrested in London on a shoplifting charge. Reports on this were ordered to be blacked out. Indira saw nothing wrong in such things. She sincerely believed that she never  lost the support of the people. As she saw it, people were simply misled by her opponents.  The real tragedy was not her losing popularity, but her conviction  that no popularity loss occurred. Coomi Kapoor’s “The Emergency: A Personal History” provides quite a few revealing sidelights.

READ ALSO  Dissent is a vital part of nationalism. We need it. Enforced nationalism is counter-productive

May be it was her insecurity that spoiled what could have been a life of triumph.  And the contradictions in her. She would dote on her spoiled son Sanjay — and turn violently angry against Sanjay’s wife Maneka, throwing her luggage out of the house in full view of the world. She loved sycophants  including those who shouted the disgraceful slogan “India is Indira.” The stuff of greatness was in her, but so was the pull of smallness. The smallness could not even be camouflaged. In Shakespearian terms, the evil she did lived after her, the good was interred with her bones.