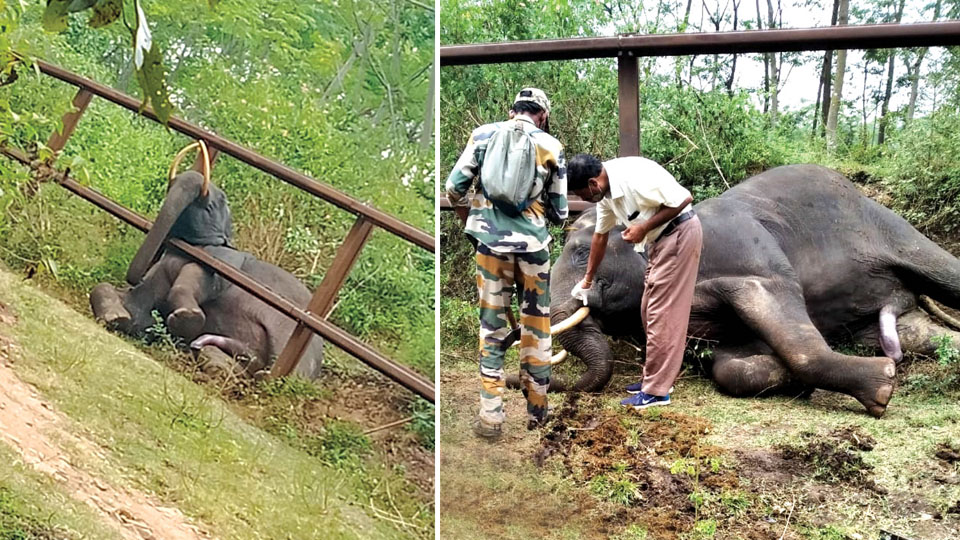 Mysore/Mysuru: In a tragic incident, a wild tusker died after it was caught in iron railing erected to prevent the elephants from straying out of wild in Nadaahadi Beat of Moleyur Range of Bandipur Tiger Reserve on Tuesday.

According to information reaching here, the incident occurred when a jumbo, after grazing on the standing crops in agriculture farms, was returning to its habitat. The ground was slippery due to overnight rains. When it tried to cross over the railing, the torso portion got struck in the railing and reportedly died of asphyxia. Just 800 meters away from the spot, a Haadi (hamlet) is situated. Though the elephant repeatedly cried for help, the tribals thought it as usual and neglected its plea. On Tuesday morning, they went near the spot to see the elephant whose head was stuck between the iron railing. The tusker was aged around 14-15 years.

The Forest Department had erected the iron railing at a four-feet height to prevent the wild animals from straying out of forests to human settlement.

On receipt of information, Bandipur Tiger Reserve Director S.R. Natesh, Hediyala Assistant Conservator of Forests (ACF) Ravikumar, Range Forest Officer (RFO) G. Puttaraju visited the spot. The autopsy was conducted by Dr. D.N. Nagaraj and Rangaraju in the presence of senior officials at around 3 pm. The carcass was buried after removing the tusks.

It may be mentioned here that a wild elephant that was caught in iron railing in Bandipur forest was rescued by Forest staff. However, another jumbo which attempted to cross over the iron railing in Veeranahosalli Range, had died before the arrival of rescue team.

A wild elephant aged around 14 to 15 years old has died after its torso portion stuck between iron railing. Prima facie it looks like death due to suffocation. Post-mortem report is awaited, says S.R. Natesh, Director, Bandipur Tiger Reserve.