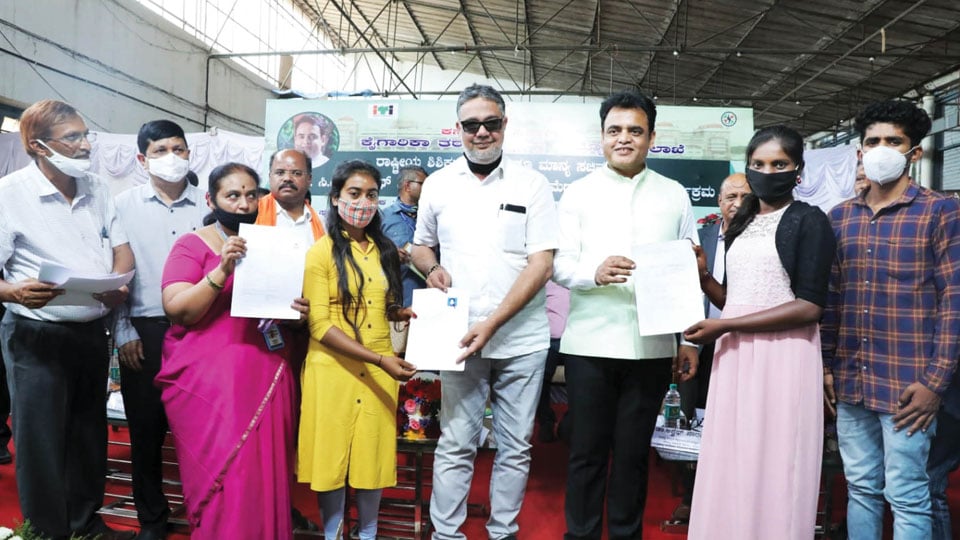 Govt. set to modernise and remove obsolescence in laboratories

Mysore/Mysuru: Minister for Higher Education and IT and BT Dr. C.N. Ashwathnarayan said that all ITI and Polytechnic Colleges in Karnataka including the one in Mysuru will be upgraded with modern equipment and latest software.

He was speaking at an interaction programme and National Apprentice Mela organised at Government Industrial Training Institute (ITI) at N.R. Mohalla yesterday where he outlined the ambitious plans of the State Government to fully equip Polytechnic Colleges and ITIs so that it will go a long way in developing critical thinking and problem-solving abilities among students.

Dr. Ashwathnarayan, who also holds portfolios for IT and BT, Science and Technology; Skill Development, Entrepreneurship and Livelihood, said, “This initiative will further reduce the skill gap by aligning students’ skills with industry demands, leading to better job opportunities for our youths.”

The Government will modernise and remove obsolescence in laboratories, workshops, computing facilities to enhance the functional efficiency of technical institutions for teaching, training and research purposes.

“We will support new innovations to ensure that the practical work and project work to be carried out by students is contemporary and suited to the needs of the industry. Extensive consultations with industry, academia, alumni and Government authorities will be held before the revamp of diploma courses,” he said.

The focus will be on increasing students’ employability and to align the courses with global standards to suit the current developments and demands. He said that not many students are aware that they could also pursue engineering after a polytechnic course but all of them join PU and then take up an engineering course.

“Those interested in engineering as a career join PU after their SSLC or Class X and then later do a B.E. Instead of joining PU, such students can take up a polytechnic course as the knowledge and skills they gain in the course is immense,” he added.

The Minister later visited the house of H.K. Meghan, who bagged first rank in all five streams in the Karnataka CET-2021 (Common Entrance Test) for admission to Engineering and other professional courses (barring Medical and Dental courses) in the State. Meghan, a CBSE student of Pramati Hillview Academy, Kuvempunagar in Mysuru, secured first rank in all the five streams, thus creating  a record of sorts.

Felicitating Meghan for achieving the feat, Dr. Ashwathnarayan said that Meghan is a role model to other students. He presented a tab to Meghan and also complimented his parents for creating a conducive atmosphere to study and excel.

MUDA Chairman H.V. Rajeev, who is also the Secretary of Pramati Hillview Academy, accompanied the Minister.