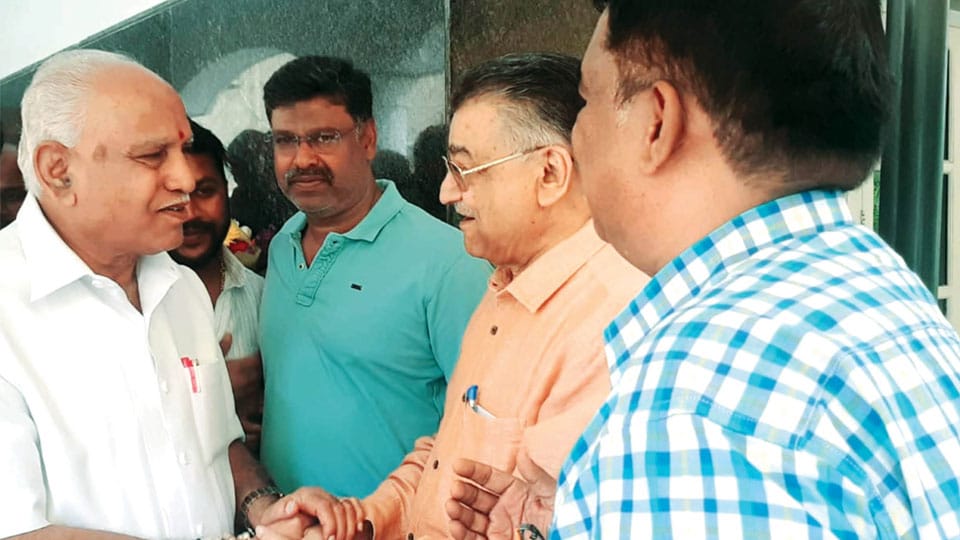 As reported from Bengaluru by K.B. Ganapathy

While passing through the Dollar’s Colony Road in Bengaluru yesterday, Star of Mysore Editor-in-Chief K.B. Ganapathy, who had gone to Bengaluru on some work, spotted an unusually large crowd in front of a house. Curious, he went near the house only to realise that he was standing in front of ‘Dhavalagiri’, the residence of BJP State President B.S. Yeddyurappa in Dollar’s Colony, one of the posh localities of the Capital City. He went near the compound and met a few political leaders from Mysuru, who led him to meet the man who is tipped to be the next Chief Minister of Karnataka. Here is the first-hand account of meeting and greeting  the future CM and the festive atmosphere prevailing inside and outside Yeddy’s bungalow. —Ed

It is celebration time outside ‘Dhavalagiri’, BJP State President B.S. Yeddyurappa’s house on the Dollar’s Colony Main Road in Bengaluru where his supporters are exuding happiness over the toppling of the 14-month JD(S)-Congress Coalition Government.

Yeddyurappa is the BJP’s Chief Ministerial candidate and the entire Dollar’s Colony Road has become a beehive of activity as a large number of MLAs, political leaders, party workers and prominent citizens are paying visit to greet him. BJP MLAs, particularly Ministerial aspirants, were prominent among those who visited his house.

A festive atmosphere is prevailing at ‘Dhavalagiri’ and swift political developments are taking place with the perennial visit of VVIPs, party workers, MLAs, leaders, well-wishers and a large number of fans from places like Bookanakere (Yeddyurappa’s birth place near Mandya) and Shikaripura near Shivamogga from where he has been chosen consecutively as an MLA.

Saying it with flowers

Every visitor was seen either carrying a flower garland or a bouquet to greet their leader and most of them fell to Yeddyurappa’s feet, seeking blessings. In a bid to please their leader, some supporters were seen carrying huge garlands and taking photographs and selfies with Yeddyurappa.

Apart from wishing good luck for Yeddyurappa, leaders and strategists are also discussing the BJP’s next move and were airing their suggestions and opinions. Not to lag behind, women party workers too are visiting the house of BJP strongman with boxes of freshly-made and aromatic sweets. Yeddyurappa was seen having a small bite of the sweets, not to disappoint his women fans and supporters.

If this is the scene inside Yeddyurappa’s house, outside a large number of banners, buntings and cut-outs of the leader dominate the road and the huge compound of his bungalow. A BJP flag is flying tall atop his house.

As there is a continuous flow of leaders and supporters from all over the State including Mysuru, the Police have placed barricades to control the crowd and at the same time regulate the movement of vehicles. Dollar’s Colony Main Road is generally busy as it connects Sanjaynagar Main Road on one side and M.S. Ramaiah Memorial Hospital on the other side. There is continuous deployment of Police to man the surging crowds and vehicular traffic.

When Yeddyurappa had become the CM for the first time in 2008, the Dollar’s Colony Road was widened, asphalted and beautified with neat interlocking concrete footpaths, ornate dome lamps and stone benches by the side for people and walkers to sit and relax in the evenings. The same road has once again become the centre of attraction now with the collapse of Coalition Government and BJP emerging as a single largest party to form the next Government.

Outside the house, party workers are bursting crackers, distributing sweets among each other and also congratulating each other. They were seen chanting pro-BJP slogans and also hailing Yeddyurappa, Prime Minister Narendra Modi and BJP National President Amit Shah.

Added to the crowd of party workers and leaders, a group of media persons too have made the space opposite ‘Dhavalagiri’ their permanent location. Their cameras are on and ready to film or shoot a photo at any given point of time. Along with cameramen and videographers, reporters are giving minute-by-minute update on what is happening inside the house. They are taking sound-bites from leaders trooping out of Yeddy’s house after meeting him about any political developments that has been discussed inside.