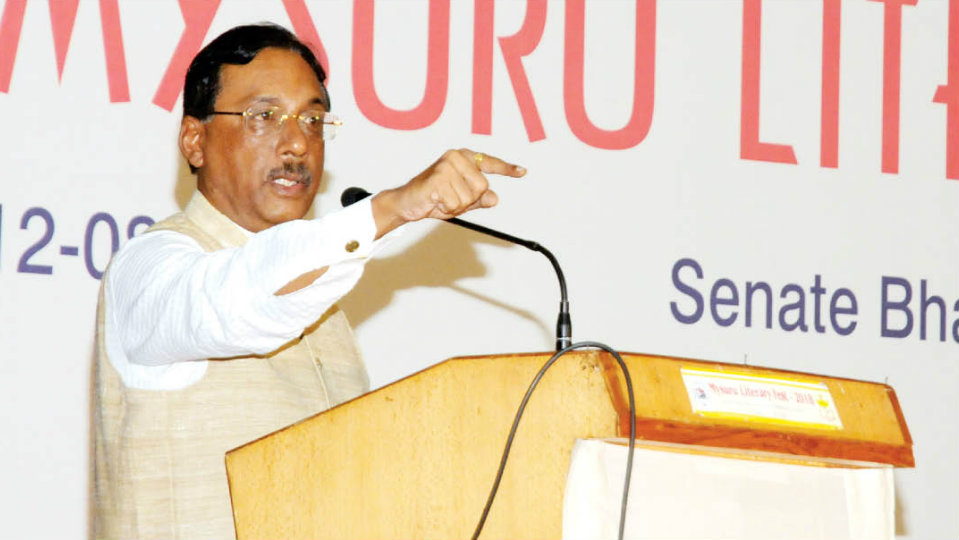 This year’s Mysuru Literary Fest was held on Aug. 12 and the VIP speaker, who was the cynosure of all eyes, among others, was Pavan K. Varma, former diplomat, Press Secretary to the President of India and, of course, an eminent and prolific writer on subjects as varied as politics and religion. He was a member of the political party JD(U) and was also a JD(U) Rajya Sabha Member.

It was my interest in English literature and books in general that took me to this festival. This year, however, I made it a point to be present and the first talk, delivered after the inauguration, was by Pavan Varma. Because of his books and appearance on TV for panel discussions, his name and fame had preceded his arrival for those who are TV and book savvy.

As for me, the first book I read of his was ‘Yudhisthir and Draupadi’ in verse form with a rendering of it in Hindi by Gulzar, the famous lyricist and film director. There was also another good reason for my interest to see and hear Pavan Varma. Just a week back I had finished reading the TV host Karan Thapar’s book ‘Devil’s Advocate’ and there was a mention of Pavan Varma sharing what was told to him in confidence about Modi. This I thought did not behove well for a diplomat – intellectual of Pavan Varma’s stature.

Karan Thapar writes that he was wondering why the BJP honchos and Spokespersons treated him as an untouchable refusing to give him interviews and if it could be because of a botched up interview he conducted of Narendra Modi seven years back before 2014, when Narendra Modi became the Prime Minister. Then, on 18th October 2017, Karan Thapar writes, Pavan Varma gave him the proof.

Actually, from what was written, I could conclude that Pavan Varma was acting as a tattle-tale. It appears Pavan Varma was sitting in Karan Thapar’s office and on seeing a photograph of Modi said, “Do you know what Prashant Kishor told me about that interview?” The picture was that of the interview which Modi terminated all of a sudden for reasons. Prashant Kishor  was supposed to be the election whizkid who brought Modi victory in the 2014 Parliamentary elections.

Pavan Varma gave him details of his conversation with Prashant Kishor about how after the aborted interview Modi kept Karan Thapar for a whole hour so that Karan Thapar would leave Modi’s home convinced there was no ill feelings on Modi’s side (for aborting the interview). Karan Thapar told Pavan Varma, it was true Modi did not look upset by the outcome of the interview.

At this point, Pavan Varma said that Modi’s courtesy was deliberate, a conscious strategy by Modi and added that Modi had told Prashant Kishor that he would never forgive Karan Thapar and when he got an opportunity would take his revenge.

This bit of information confirmed for Karan Thapar as to why BJP Party Spokespersons and also Amit Shah refused to appear in Karan Thapar’s TV shows. Of course, Prashant Kishor had already deserted BJP by this time going to Bihar to help Nitish Kumar of JD(U). Let it be.

Pavan Varma’s talk was entrancing as much as flawless in a language that flowed from his lips like steaming tea cascading from the spout of the kettle. It was eloquent. There was scholarship in every word he uttered about the subject, “Adi Shankaracharya: Philosophy and Society.” He spoke exactly for one hour and ten minutes and the audience listened to him in pin-drop silence, I must say spell-bound.

Responding to the sentiments of earlier speakers who said that a busy man like Pavan Varma graciously gave away his three days for a mere 45 minutes lecture, Pavan Varma in all humility said, “You have done a favour by giving me an opportunity to make this literary pilgrimage to Mysuru which is among the few civilised cities in India. It is going to be a memorable experience for me.”

He said he would speak of the resilience of Hinduism and its power of original thought. He then said, what I guess Dr. S. Radhakrishnan had famously said for the first time that ‘Hinduism is a way of life.’ In fact, he began his talk with what he had written in the preface to his book ‘Adi Shankaracharya: Hinduism’s Greatest Thinker.’

I think it is worth quoting here: “It has no one Pope, no one text, no inflexibly prescriptive ritual, no mandatory congregation and no one presiding temple.” According to Pavan Varma, Hinduism as a religion is inseparable from Hinduism as a philosophy. Of course, it is very true as every Hindu knows the religious part of it has varied rituals and rites while the philosophical part of it has Vedas and Upanishads. He thereafter dilated on the theme tracing the ancient roots found in “forest academies.”

Before writing this book he had travelled from Kaladi in Kerala where Adi Shankara was born in 788 AD to Kedarnath where he obtained Samadhi, also visiting other places which are associated with his life. The earlier part of the book narrates the places he visited and the incidents in those places connected with Shankaracharya. Interestingly, it was Shobha Karandlaje, BJP MP from Udupi-Chikkamagalur Constituency who had rendered support for his visit to Sringeri.

Pavan Varma seems to have been much obsessed with and passionate about the subject of his book Adi Shankaracharya.He confesses that there were countless occasions when he felt that Adi Shankaracharya was directly there to give him hope and strength and to find solutions to what appeared to be intractable obstacles. ‘Stockholm syndrome’ I thought!

Reading Pavan Varma’s book about Adi Shankaracharya and the Brahma Sutras written by Badarayana, who is identified as Vyasa, one gets the feeling that the fountain-head of Hinduism is Vedas. It is based and rooted deeply on the views of one or the other ancient Veda and Upanishad which predates Buddhism and Jainism by about four to five centuries.

It could be, that those Vedic practices got corrupted leading to ‘Varnashrama Dharma’ which became the base for caste system leading to the pernicious practice of untouchability. Thus Hinduism, also called ‘Sanathana Dharma,’ was begging for reformation and those reformers were the founders of Jainism, Nigantha Nataputra and Buddhism, Gautama Buddha.

Reading this explanation for the birth of Jainism and Buddhism, I thought of the birth of Christianity under similar circumstances. There was practice of commerce and immoral activities taking place in the Jewish Temple and in the Synagogues. That was the reason why Jesus, himself a Jew, goes to the temple and attacks the priests and money changers. This ultimately led to the crucifixion of Jesus who merely wanted to reform the Jews of the time but a new religion was born !

According to Vedic scholars, Sanathana Dharma is the religion born from the Vedas of Indo-Aryan origin and the progenitor of Vedas was Vyasa or Badarayana, either separate individuals or one person known in two names. However, Vyasa is the familiar and popular name accepted.

This identity of Vyasa as author of Vedas gets further affirmation from Mahabharata, also by Vyasa, where he has interpolated the quintessential philosophy of Vedas in the form of ‘Geetopadesha’ which became a separate Hindu religious Holy Book, ‘Bhagavad Gita.’

From the Vedas sprang six orthodox schools of thoughts forming the philosophical aspect of Hinduism. They are               1. Nyaya 2. Vaisheshika 3. Samkhya or Sankhya 4. Yoga 5. Purva Mimamsa  and 6. Vedanta or Uttara Mimamsa.

This, naturally became very unwieldy so much so it needed regular systematisation and the Sutra texts were born — short aphorisms called Sutras.

‘Brahma Sutras’ is also known as Vedanta Sutras and authored by Vyasa himself. Many have written commentaries on ‘Brahma Sutras’ but the oldest of the extant commentaries on Brahma Sutras is by Adi Shankaracharya, the exponent of Monism as opposed to Dualism of Madhvacharya and the Qualified Monism of Ramanujacharya (Dvaita, Advaita, Vishishtadvaita respectively.)