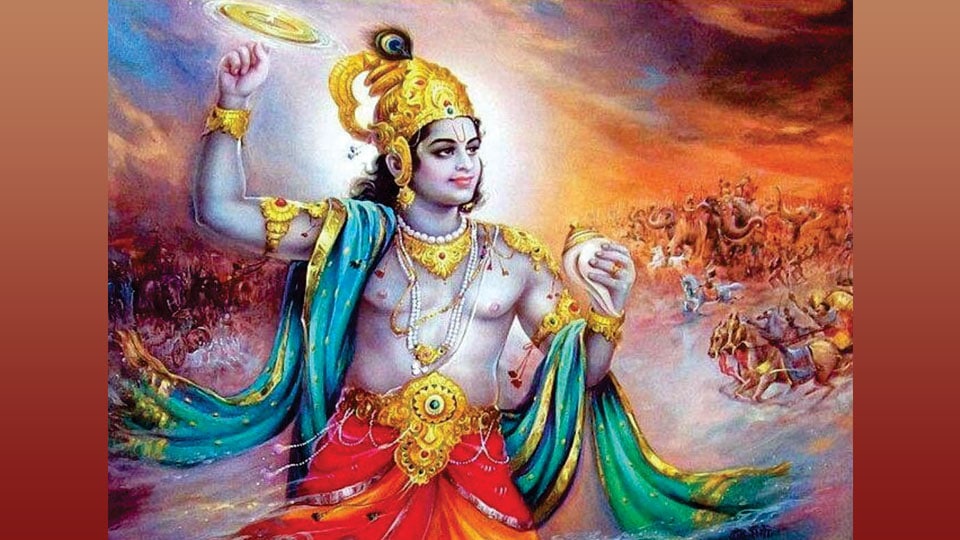 Musings on pada puja, a role-model of a government officer and Bhagavadgita

A few days back I visited a friend’s place in city on learning that a revered Swamiji would be visiting his house for pada puja. A family devotion but I was invited.

I had seen a couple of pada puja (ritual worshipping of a Saint’s feet) earlier where the ritual prayer is offered to the feet of the Swamiji placed on a silver or golden tray beginning with an ablution.

The Swamiji so worshipped sits on a dedicated chair during the ritual of chanting of mantras and offering of flowers, fruits etc., as in a trance, rarely opening his eyes.

Mathoor Krishnamurthy, who was the Director of Bharatiya Vidya Bhavan (BVB) in London and later in Bengaluru, wanted to revive BVB Mysuru which was in a dormant state. He got together a team and decided to raise funds for a building through his religious discourses at Jaganmohan Palace auditorium to a full house always. Among the congregation were some, so mesmerised, they wanted to invite him for a pada puja to their houses.

Since I was closely working with Mathoorji, one couple approached me to  speak to Mathoorji to visit their house for the purpose. Though Mathoorji, in his characteristic smile and a twinkle in his eyes, refused outright saying that he was not a Swamiji or a Saint to be worthy of such a special veneration, he at last agreed for my sake.

Naturally, I was a special invitee and was made to sit diagonally opposite to Mathoorji rather close to him. The rituals began as I have described above. Mathoorji sat stiff, eyes closed. When he opened his eyes, he winked at me with a smile and said “Ganapathyji, these are not my legs” and closed his eyes again. Let it be.

To return to the recent visit to such a pada puja, I was in  for a surprise when the revered young Swamiji sat in Padmasana on a dwarfed platform while the ritual was performed to a pair of clogs that looked fresh. Did not seem being used by the Swamiji.

Soon after the Swamiji left the house the atmosphere changed, like the ‘climate change’, from the metaphysical (spiritual) to the mundane. One person button-holed me for a friendly conversation and asked, apparently awakened by the religious ambience created by the presence of the Swamiji: “Once Sri Vishwesha Teertha Swamiji of Pejawar Mutt was asked by a devotee, quoting verses 7 and 8 of chapter-4 from Bhagavadgita (whenever there is adharma in this world for the protection of the good and the destruction of the wicked, I manifest in every age to establish righteousness. Why this assurance was not fullfilled. We were ruled by the invaders for over 1,000 years, why Krishna did not come to help us?”

Even as the questioner was wondering what answer Swamiji would give, pat came the answer:

“Why do you doubt the Gita. Sri Krishna is already there in your heart. You are already that avatar, that incarnation. You are not aware of it. You are not making up your mind to fight the wicked, the adharma.”

That same evening I went to see my another friend to spend some more quality time. I mentioned to him about what I heard earlier after the pada puja about Pejawar Swamiji. This friend raised his eyebrows and asked, “Do you know the person who asked that question to Swamiji?” I said I did not ask nor did he mention. Now the revelation.

This friend is a retired government officer from the Information Department. He is of a kind who is ‘more loyal than the king.’ If any government employee has followed the political moral precept of the former Chief Minister of Karnataka (then Mysore) Kengal Hanumanthaiah that ‘Government’s Work is God’s Work’ which was engraved on the stone building of our Vidhana Soudha, it was this person.

He was posted in Mangalore, near Udupi. Among his duties was publicising and propagating ‘Family Planning’ message to the people. It was a Government programme entrusted to his Department. But how to get the elephant into the Khedda? He conceived the idea of going places in his van carrying a 16 mm cinema projector and exhibit a film about the famous classical singer M.S. Subbulakshmi who was then in the news having conducted a music concert at the UN which was much appreciated.

The confidence trick was to insert the ‘Family Planning’ message in-between the screening of the film. The message was conveyed!

Once he was to show that M.S. Subbulakshmi film to Pejawar Swamiji but was not sure how he would like the ‘Family Planning’ message in the film. So as a person who is true to himself mentioned this to Swamiji.  The Swamiji’s response was ambiguous but this Officer who was ‘more loyal than the king’ took a chance. The Swamiji was not offended. Rather he gave a pep talk on the subject after the show.

It was then the Officer posed the ‘Gita’ question to  Swamiji and the Swamiji gave the answer I mentioned earlier above.

My friend had played a similar ‘trick’ on another overbearing, always news-making ICS Officer from Mangalore Lobo Prabhu. I am sure many of my contemporaries might remember him.

Lobo Prabhu being a gentle-man and a highly cultured person did not feel offended but made his remarks in his British English: Yes, I noticed the sugar-coated pill in the film.

God’s work well done. My friend retired from service with a clean hand, a clear heart and a clear conscience.

2 COMMENTS ON THIS POST To “Waiting for Lord Krishna”