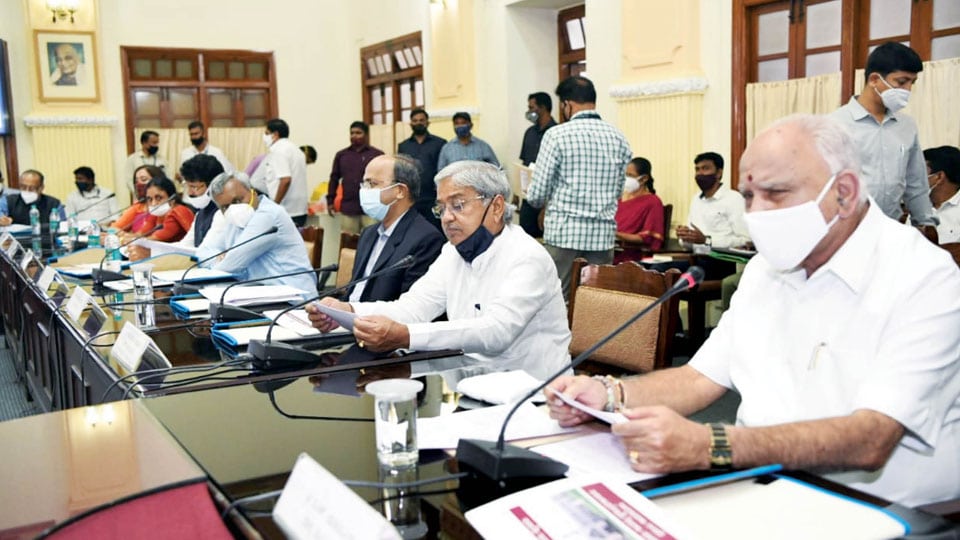 Bengaluru: The Dasara High Power Committee meeting held here this morning under the Chairmanship of Chief Minister B.S. Yediyurappa has decided to celebrate Dasara-2020 in simple but according to tradition in view of COVID-19.

It may be mentioned here that SOM had published a news item about holding Jumboo Savari within Palace premises and cancellation of all cultural events in its issue dated August 26, 2020.

Talking to reporters after the meeting at Vidhana Soudha, the CM said the meeting decided not to celebrate ‘Nada Habba’ in a grand scale this year owing to Corona. However, it will be celebrated symbolically without allowing the gathering of crowd. This time, Vijayadashami Day procession (Jumboo Savari) is restricted within the Palace premises but public is not allowed. Only five elephants will participate in Dasara festivities.

Yediyurappa said the State Government will release Rs. 10 crore for holding festivities. The inauguration will be done symbolically by five Corona Warriors to be selected from Doctors, Nurses, Asha workers, Pourakarmikas and Police, atop Chamundi Hill on Oct. 17. Names of the warriors will be finalised at another meeting to be presided by District Minister S.T. Somashekar soon.

Giving complete details of the meeting, Tourism and Kannada and Culture Minister C.T. Ravi said Gajapayana, an event to welcome the Dasara jumbos, will be held symbolically in front of the Palace sans any crowd.

The Dasara Sports Torch will also be welcomed symbolically. Even the wrestling will be symbolic without any competition.

There will be no Dasara Exhibition this time to avoid concentration of people at one place.

Even the spectacular Torch Light Parade will not be held at Bannimantap Grounds.

At the meeting, suggestions came to show pre-recorded cultural programmes at Palace through giant screens and electronic media but no decision was taken. “We are yet to decide on bringing the additional Police force from other districts for security as they too are tied in Corona related duty in the last 5-6 months. Large posse of Police force is not required if Dasara is held in a simple manner,” Ravi said.

The Minister said public will not be allowed to gather anywhere in city. This time, there will be no VIPs or VVIPs during the 10-day Dasara festivities. While the State Government has decided to release Rs. 10 crore for Dasara, the Mysuru Urban Development Authority (MUDA) has come forward to release Rs. 5 crore.  The last time Dasara was celebrated in a simple manner was in 2003 and after 17 years, now, he said.