Mysuru: The jamboree with caparisoned elephants, cultural  troupes and tableaux passed off peacefully without any untoward incident yesterday.

City Police Commissioner Dr. A. S. Rao under the guidance of Home Minister Dr. G. Parameshwara had made elaborate security arrangements for peaceful procession from Mysore Palace till Bannimantap Grounds. 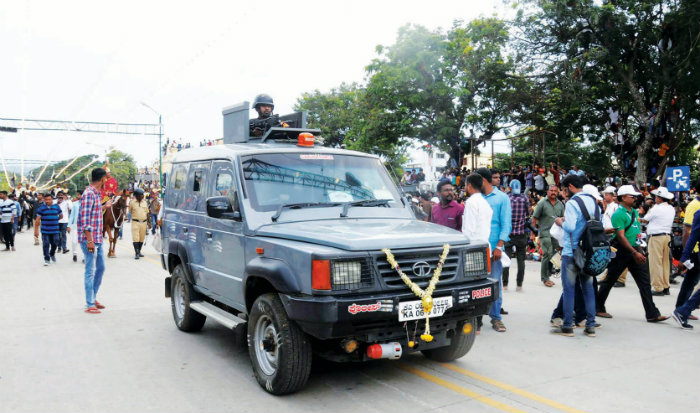 Garuda Police vehicle on the move.

The Department had deployed more than 5,500 Police personnel including 2,500 from other districts to ensure security for  the 10-day festivities. The Department had installed metal detectors for the entry to Palace; allowing suspicious vehicles to city only after all security checks at entry points besides barricaded the five-kilometre  procession route as a precautionary measure to prevent crowding. Police were also making announcements cautioning people about thieves, mobile phone lifters and pickpocketeers besides to take care of their children and elders, ensure safety of gold ornaments and other belongings, every 10 minutes along the procession route and at Bannimantap Grounds.