Home » Mysore Dasara 2018 » Cleaning the Mess after the Show 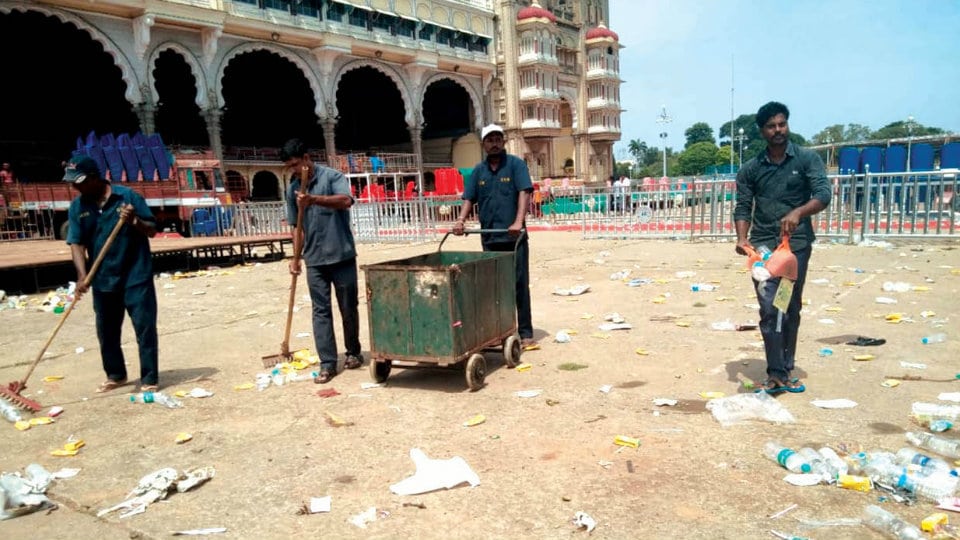 Cleaning the Mess after the Show

Mysuru: Mysuru City Corporation (MCC) Pourakarmikas swung into action from last night itself to clean the muck, garbage and the things lying around all along the four-kilometre Dasara procession route on Sayyaji Rao Road, after the successful completion of the spectacular 409th Dasara celebrations yesterday.

Nearly 30 to 40 pourakarmikas who have been specially deputed to clean the places started work from early in the morning. The barricades and pandals were first removed inside the Palace premises and also near the Chamaraja and K.R. Circles and the whole place was cleaned.

A few of the nearly 42 tableaux that took part in the procession yesterday were still seen parked near Bannimantap Grounds where it concluded. However, about 25-30 tableaux were dismantled and the materials packed. They all returned to different parts of the State from where they had come.

“The cleaning of the city has begun from last night itself as soon as the Dasara procession and Torch Light Parade at Bannimantap was over. It was intensified today and by tomorrow evening the city will be 100 per cent clean,” said Corporation Commissioner K.H. Jagadeesha speaking to Star of Mysore, this morning.

He said that almost all the VVIPs, except Union Minister Suresh Prabhu had left last night itself to their respective places. “Suresh Prabhu had come specifically to watch the Dasara celebrations. He is still visiting a few more places of importance and leave the city this afternoon,” he said.

The Mysuru City Railway Station saw a little more rush than usual as a few of the tourists were seen leaving in the morning. However, the rush is likely to commence from tomorrow evening and on Monday morning as all the people who have come on holidays will be leaving the city.

The scene was not much different at the Sub-urban Bus Stand except that there were a lot more people here. There was heavy movement of vehicles and people on Bengaluru-Nilgiri Road and Irwin Road as many were seen boarding buses to leave to their destinations while others were on their way to pilgrim centres like Nanjangud and Biligirirangana Betta (BR Hills).

Meanwhile, tourists continued to throng the city today also as it is the holiday season and tomorrow being Sunday they are visiting many tourist places of importance.

Nearly four lakh people have attended the Flower Show at Kuppanna Park till yesterday. The show will end tomorrow (Oct.21) at 9 pm. There was hardly anyone who was disappointed after seeing the various attractions as they thronged the place from early in the morning till late in the night.

The Ashoka Pillar opposite Glass House was one of the major attractions. About 74,000 roses have been used which includes the roses that were changed once in the eleven-day show. Nearly 30,000 roses were used to decorate the tea kettle with cup. The other attractions include the playgrounds and amusement centres.  The flower show is open from 9 am to 9.30 pm on the last day tomorrow.