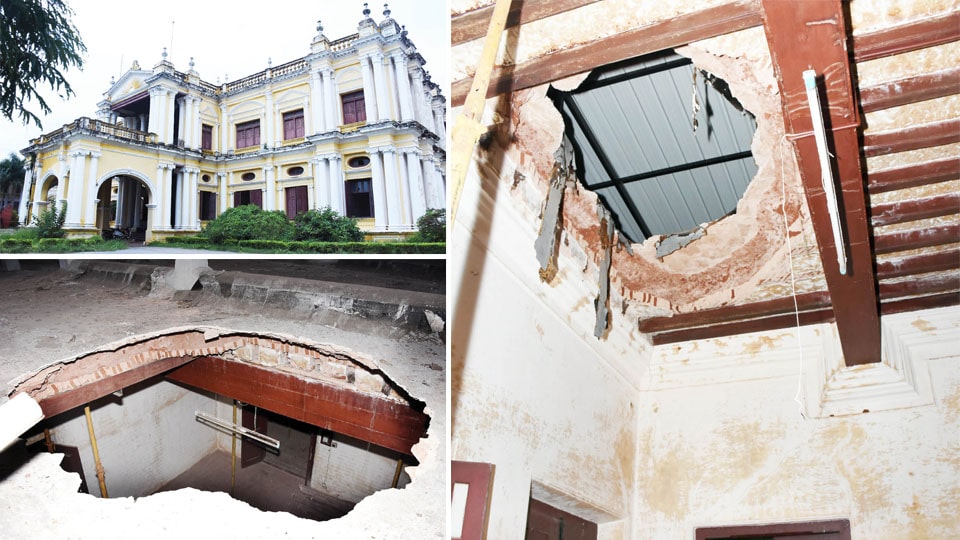 Mysore/Mysuru: Very soon, the Jayalakshmi Vilas Mansion in Manasagangothri campus is likely to join the long list of dilapidated structures in the heritage city of Mysuru if immediate repair works are not undertaken.

A portion of the ceiling has caved in at two places creating gaping holes in adjacent rooms due to constant leakage caused by incessant rains and a weak structure. Though the ceiling has been temporarily covered in one place, the damage is huge.

The collapse has occurred in a section of the building that houses the University of Mysore’s (UoM) Folklore Museum.

P.R. Thippeswamy Prathishtana has lodged a complaint with the Higher Education Minister in this regard and following the Minister’s direction, UoM Vice-Chancellor Prof. G. Hemantha Kumar and Registrar Prof. R. Shivappa inspected the Mansion.

It is a 116-year-old building — built in six-acres of land — housing some of the finest and priceless artefacts and sculptures and is a place of immense tourist interest. Unfortunately, the building is lying in a state of neglect and disrepair even after philanthropist and Infosys Foundation Chairperson Sudha Murty spending Rs. 1.17 crore to renovate the majestic structure in 2001.

Explaining the nature of the collapse, Prof. N.S. Rangaraju, who is a Member of the Expert Committee for Development and Protection of Mysore Heritage Region and Convenor, INTACH (Indian National Trust for Art and Cultural Heritage) told Star of Mysore that he had personally visited the building yesterday to understand the nature of the damage.

“Last year, a portion of the ceiling collapsed and many 3-ft extra pillars with concrete bases were built on top of the ceiling to place beams to support a metal shelter to prevent leakage and water seepage. This was done to the first floor of the structure and the roof is full of cracks and water seeps through them and the corners dangerously. It is in this portion the ceiling has caved in,” he said.

When the ceiling collapsed, the University Vice-Chancellor Prof. Hemantha Kumar formed a Committee comprising engineers and heritage experts and asked for a Detailed Project Report (DPR). “I was part of the Committee and a DPR was prepared at an estimated cost of Rs. 21 crore. The Mansion has three sections covering 123 rooms in a built up area of 1.20 lakh square feet. Over 10 to 12 rooms constantly leak whenever it rains and this year, it is raining even now,” Prof. Rangaraju said.

When the DPR was submitted last year with the recommendations of immediate restoration and repairs, the University had cited lack of funds. The ceiling of the building undergoes a process called ‘sacking’ where the RCC ceiling comes down at the corners due to pressure of rains and also due to weak ceiling and cracks. “Comprehensive repairs are the need of the hour and every year, the costs go up. Now the same repair will cost Rs. 25 crore,” he explained.

The ‘sacking’ phenomenon has been observed even in portico, dancing hall and the Kalyana Mantapa of the Mansion. “When works were taken up following grants from Infosys Foundation where artistically stained glass was fixed on the ceiling, they were not fixed properly and this has led to seepage. As a result, the wooden floor has been damaged and the teak wood beams have been dislocated. We need to get the same quality teak wood for restoration and also, the centring of the building has to be made strong,” he revealed.

The Committee even suggested stage-by-stage repairs as the University was not in a position to rake in Rs. 21 crore in one go for repairs and it was COVID time. “We told the University to release Rs. 5 crore or Rs. 7 crore every year in the budget as the restoration is a continuous process and cannot be done in one year. Jayalakshmi Vilas Mansion repairs will extend up to three to four years as this is the scale of damage that has occurred till now due to neglect. We are in danger of permanently losing the building like we have lost the Lansdowne Building and a partial Devaraja Market,” Prof. Rangaraju observed.

Last year, the Government-appointed Heritage Expert Committee had written a letter to the Vice-Chancellor and sought immediate repairs and restoration of the building. Maj. Gen. (Retd.) S.G. Vombatkere, who was one of the signatories of the letter along with Prof. Rangaraju and others, told SOM that he felt hurt that their recommendations have not been taken into consideration.

The Mansion was constructed in 1905 by mother of Nalwadi Krishna Raja Wadiyar for Princess Jayalakshammanni. The University of Mysore purchased Jayalakshmi Vilas Mansion in 1959 for Rs. 10 lakh when K.V. Puttappa (Kuvempu) was the Vice-Chancellor. This structure is of a rare kind in the entire South India.