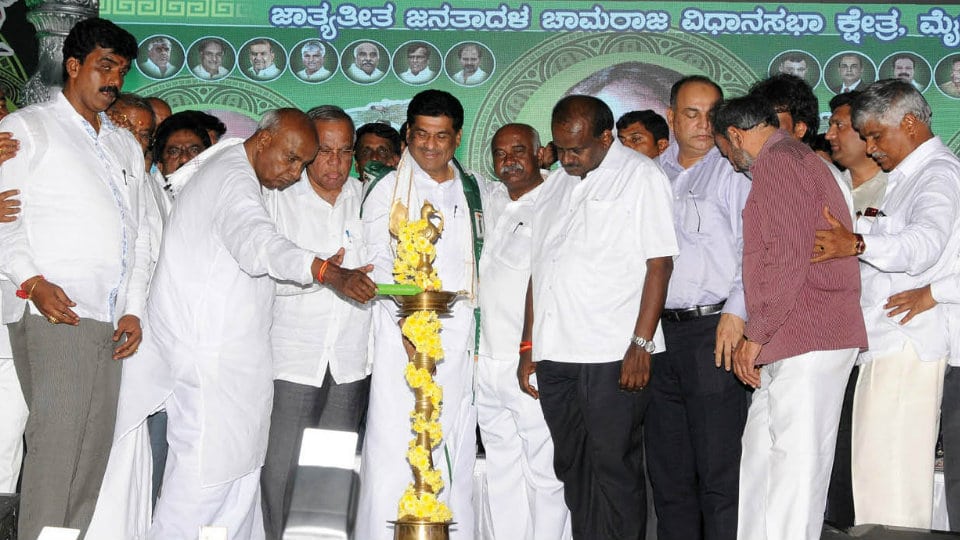 Mysuru: The JD(S), which has taken an early start in the campaign in the run-up to the 2018 Assembly polls, conducted a road-show in Chamaraja Assembly segment yesterday.

Former Vice-Chancellor of University of Mysore and KSOU, Prof. K.S. Rangappa, who is the most likely JD(S) candidate for Chamaraja Assembly segment, flanked by JD(S) State President and former CM H.D. Kumaraswamy (HDK) and Chamundeshwari MLA G.T. Devegowda (GTD), participated in the road-show.

Former University of Mysore Vice-Chancellor Prof. K.S. Rangappa, along with JD(S) Supremo H.D. Deve Gowda, is seen lighting the lamp during the launch of ‘Kumara Parva’ rally near Kuvempu Circle at Hebbal coming under Chamaraja Assembly segment yesterday as JD(S) State President and former CM H.D. Kumaraswamy and other leaders look on.

Speaking at the rally, H.D. Kumaraswamy said that the JD(S) rally, which began early this month from Chamundeshwari constituency, has traversed across the region and has received tremendous response from the people who were now looking up to JD(S) with renewed hope.

Maintaining that the response from the people to the rally has infused a new enthusiasm among the party workers, the JD(S) leader said that they had already worked out a blue print to help the farmers in distress.

Lashing out at Chief Minister Siddharamaiah for making false claims on State development, Kumaraswamy invited the CM for an open debate on the issue.

Claiming that it was he who was responsible for bringing Rs. 1,700 crore from the Centre to the city under JNNURM scheme, Kumaraswamy also asserted that he played a big role in bringing many projects and schemes to the city and district, including Megalapura and Kabini drinking water projects, UGD project, Sagarkatte bridge, etc.

Ridiculing the CM for terming the JD(S) as a family party, the JD(S) leader said that Siddharamaiah himself is now indulged in making the Congress father-son party with the CM’s son Dr. Yathindra announcing he would contest from Varuna Assembly segment.

Hitting out at Health Minister K.R. Ramesh Kumar on the controversy over the amendments to the Karnataka Private Medical Establishments (KPME) Act, Kumaraswamy termed the Minister as a hypocrite.

Alleging that Ramesh Kumar had failed to run Government Hospitals properly, the JD(S) leader questioned the Health Minister on who should be held responsible for over 60 deaths during the doctors agitation.

Noting that the Bill proposed by him during the JD(S)-BJP coalition Government in 2007, wanted to crack down on quacks besides proposing jail term for them while the Grievance Committee was to be represented by members from the medical fraternity, including the local heads of the Indian Medical Association (IMA), Kumaraswamy said that he would raise the issue in the Assembly.

He dismissed CM Siddharamaiah’s claims that the KPME amendments was first proposed by the JD(S)-BJP coalition Government, as a bundle of lies.

JD(S) Supremo and former PM H.D. Deve Gowda, in his address, said that he wanted to see his party return to power on its own in the 2018 Assembly polls.

Pointing out that this was the second ‘Kumara Parva’ rally in Mysuru after the one in Chamundeshwari constituency earlier this month, Devegowda said that his party’s real fight will begin once the election schedule is announced.

Asserting that he was not for entering into coalition with any party in forming the Government after the polls, Deve Gowda reiterated that he very much wanted to see H.D. Kumaraswamy as the next Chief Minister only by the choice of people.

Claiming that people still remember HDK’s administration in the 20-month-old JD(S)-BJP coalition in 2007 as a good one, Deve Gowda stressed on the need for unity among the party cadres to ensure that HDK becomes the CM again.

GTD lashes out at Siddu

Chamundeshwari MLA GTD, in his address, termed Chief Minister Siddharamaiah as a most arrogant person. Pooh-poohing Siddharmaiah’s rule in the State, GTD said that the CM had such audacity to address former PM H.D. Deve Gowda in singular.

Asking the CM to recall his earlier days when he entered politics, GTD said that Chief Minister Siddharamaiah was dreaming to get elected from Chamundeshwari constituency in 2018 polls, but that will remain only as a dream for the CM.

He vouched to make HDK as the Chief Minister again.

Former MP and JD(S)  leader A.H. Vishwanath, in his address, declared that Prof. K.S. Rangappa was the party candidate for Chamaraja segment, which got the nod from HDK and H.D. Deve Gowda.

Launching a tirade against Siddharamaiah, the former MP said that Siddharamaiah had made it a practise to politically finish off anyone who had helped him in his (CM) election.

Citing the example of himself, V. Sreenivasa Prasad and S.M. Krishna, Vishwanath said that Siddharamaiah was out to finish the Congress with his autocratic style of functioning.

Pointing out that the people very much need a regional party and not a party having High Command culture, Vishwanath asserted that he was working towards making the State Congress-free.

He further said that the people of the State were very much eager to see Kumaraswamy as the Chief Minister again.

Senior JD(S) leader P.G.R. Sindhia, Soraba MLA Madhu Bangarappa, who is the State JD(S) Youth President and other leaders too addressed the gathering.

Prior to the rally, H.D. Kumaraswamy (HDK) inaugurated the new Chamaraja constituency party office in Gokulam.

Speaking on the occasion, Kumaraswamy said that the party top brass has already decided on who the party candidate (Prof. K.S. Rangappa) is.

He further said that the first list of party candidates for the 2018 Assembly polls will be announced by the end  of this month.

Even as former VC Prof. K.S. Rangappa projected himself as the front runner for the JD(S) ticket to contest from Chamaraja Assembly segment, the party received setback with city unit President K. Harish Gowda rising a banner of revolt.

While HDK and H.D. Deve Gowda promoted the former VC with Kumaraswamy holding a road-show with him (Prof. Rangappa) and addressing ‘Kumara Parva’ rally at Hebbal on Sunday, Harish Gowda who is miffed with the party top brass for side-lining him, chose to skip the road-show and the rally as well.