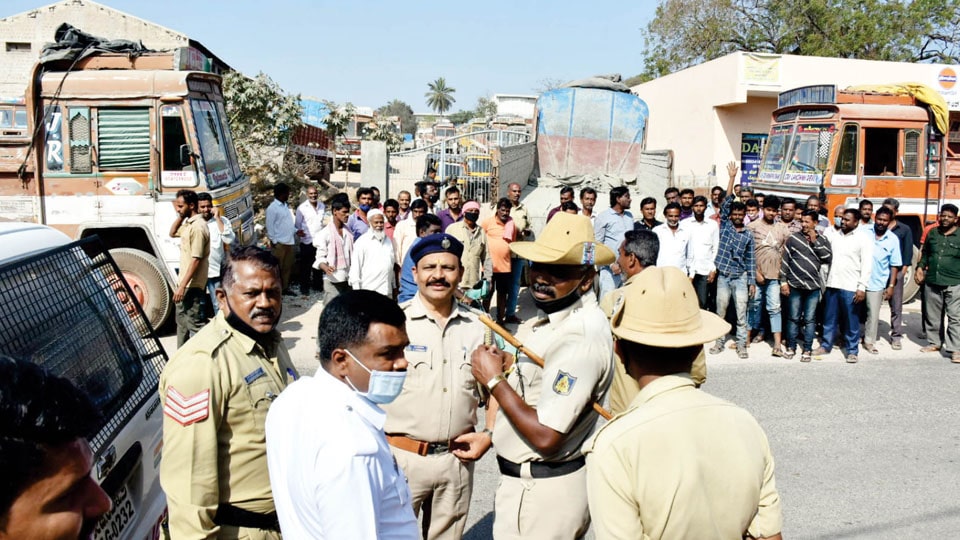 Mysore/Mysuru: Following the 15-year lease period of the lorry stand at Taluk Agricultural Produce Co-operative Marketing Society (TAPCMS) Limited taken by Railway Goods Shed Lorry Owners Association coming to an end yesterday, the TAPCMS  authorities have locked the gate of the lorry stand on Jodi Thenginamara Road in Bannimantap, which has forced the truck owners to park their vehicles on either side of the road causing disruption in smooth movement of vehicles since last evening.

Also, about 100 trucks are stuck inside the lorry stand and unable to come out as the gate is locked besides causing problems to transport essential commodities which have arrived in goods trains.

This morning, following a request from Railway Goods Shed Lorry Owners Association President Abdul Khader Shahid, through Inspector Narayanaswamy, the officials opened the gate and allowed five trucks outside and again closed the gate.  Shahid said that there are no official lorry stands in city and trucks coming to the Railway Goods Shed used to be parked in the lorry stand belonging to TAPCMS. As the lease period came to an end yesterday, the officials have locked the gate with about many trucks still parked inside.

Pointing out that the TAPCMS authorities have now given 10 days time to vacate the place, Shahid said that as of now, nearly 250 trucks are parked on the roadside and if the trucks numbering more than 100, which are still in TAPCMS parking area come out, where can they be parked as parking on roadside would cause disruption in movement of vehicles.

Stating that there was space to park trucks near Gumnam Shahwali Dargah at Mysuru New Goods Terminal (MNGT) belonging to Mysuru Urban Development Authority (MUDA), Shahid said that if the authorities provide facilities such as light, water, toilets and connecting road, the trucks could be parked there.

Meanwhile, TAPCMS President Chethan said that developmental works are to be taken up at the said parking space for which funds have been sanctioned by National Bank for Agriculture and Rural Development (NABARD). Hence the lease has not been renewed and a notice was served and a flex with a message asking lorry owners and drivers to vacate the place before Jan. 31 was also put up.

He further said that following the decision taken in TAPCMS Board meeting, the gate was locked yesterday and added that opportunity would be given to allow trucks that are parked inside the gate to go out but trucks cannot enter the parking space.